Editor's Note: This story was updated on Oct. 17.

From Sept. 17 to Sept. 25, freshman Amy Li competed with eleven other American girls and boys as they represented the U.S. at the Fourth Bi-Annual Junior Wushu World Competition in Macau, China. Li returned as the girl's junior world champion. 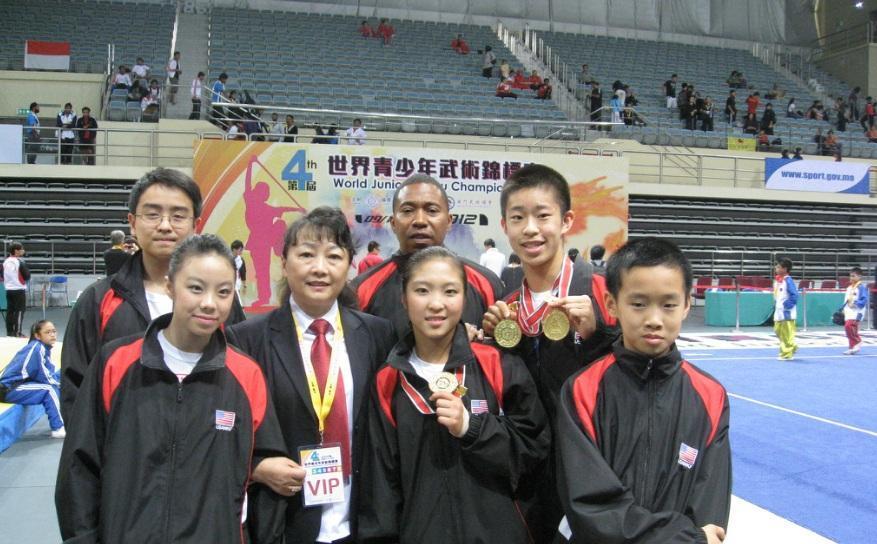 Photo: Freshman Amy Li (center) stands with her teammates and coach after winning gold at the bi-annual Wushu world championship.

Wushu is both an exhibition and a full-contact sport, derived from the Chinese martial art form of kung fu. It can be considered a hybrid between karate and kung fu. Li participates in the exhibition sector of the sport, which involves martial art maneuvers including flips, kicks, punches, throws and jumps. The competitors were judged and given points according to specific rules. Each performance is called a 'form.' Competitive forms, like what Li performs, have time limits that can range from 80 seconds to over five minutes. Modern Wushu is increasingly focused on aerial techniques to add depth and difficulty to the forms.

Each competition requires competitors to perform one mandatory 'form' in addition to at least two of the remaining four 'forms'. At the junior level, a 'form' is a set choreography pre-determined by the judges. Competitors can pick from a minimum of two 'forms' to a maximum of five 'forms' to perform at competition. For the final exhibition, competitors perform their best ‘form' for the judges. Li performed the staff 'form' as her final exhibition. Competitors hold a long staff in their hands and perform a series of complicated actions in order to demonstrate versatility and adeptness with the staff.

Competitors have two years to perfect their 'forms'. Although two years is a substantial amount of time, Li doesn't believe that it is long enough. "Wushu is hard, and I don't think two years is enough time at all to perfect a form," she said.

Li practices an average of eight hours a week at the Omei Wushu Center in Fairfax, Va. Since the forms are pre-choreographed, Li believes that the only way to win is by adding extra flair to the performance. "When you perform [wushu forms], it's important to add your own style and flavor," Li said.

The U.S. spent the day preceding the competition tapering rather than practicing in the gym, which Li believes caused them to be lethargic at the start of the competition. Despite this, Li was extremely satisfied and relieved with the outcome. "When I won, it was immediate satisfaction, because it was retribution for two years of hard work," she said.

To see Amy Li in action, watch a video of it here.