Bobby Petrino got fired, but Jessica Dorrell got wrecked

Last Wednesday, University of Arkansas's head football coach Bobby Petrino was fired due to his fling with 25-year-old, Jessica Dorrell, Arkansas's Student Athlete Development Coordinator. The two were caught in a motorcycle accident on March 31st, which left Petrino completely damaged. Not only did Petrino suffer from a broken rib and cracked vertebra, he also lost the $24.92 million he was set to earn during his 7-year contract with Arkansas, and, of course, his mistress. 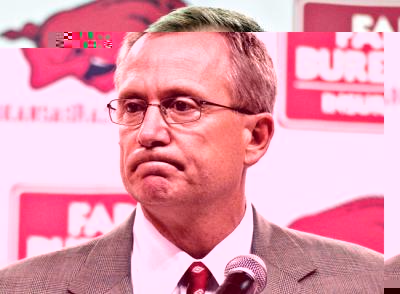 On the surface, it seems like the affair was just one slip up, just one night. However, it wasn't just one night of indiscretion with an employee by a married father of four. It was one lie that snowballed into another, and then another, eventually surpassing Petrino's personal life and permeating his professional life. Arkansas Athletic Director (AD) Jeff Long says Coach Petrino knowingly misled the university for some time. He not only helped get his mistress hired at the university, but he also continued his relationship for a while without anyone's knowledge.

Petrino may be jobless, and possibly wifeless, but he will always have his reputation as a great football coach that led Arkansas to a 21-5 season. There is a possibility that another school will hire him. Jessica Dorrell, on the other hand, got the raw end of the deal.

Whether or not she has been fired remains to be seen, but she's lost a lot more than a job working for a college football team. First things first, she's lost her sugar daddy. According to the Huffington Post, at some point during their relationship, Petrino gave Dorrell $20,000 as a gift. Was this gift to keep Dorrell quiet about the whole affair, or was it to keep the affair going? Either way, the news just makes both Dorrell and Petrino look even worse.

It's also interesting to note that Dorrell was engaged to Josh Morgans while she was dating Petrino. Now that news of Dorrell's secret love has surfaced, Morgans is probably humiliated and it's highly unlikely that he'll be taking a trip to the altar with her at this point.

There is a possibility that Petrino will be hired by another school to coach, and people may forget that this whole sex scandal ever happened. But even if people forgive Petrino, Dorrell will always be known as the girl Coach Petrino slept with. Although what Dorrell and Petrino did was despicable, the fact that Petrino may be forgiven, while Dorrell will never be is predictable - although completely unfair.

Sports scandals spark everyone's curiosity, and it is easy to judge the people involved, but sometimes we forget to consider the almost irreparable damage that it does to its victims. If an office manager had committed the same infractions that Petrino had, the ramifications would not have been nearly as severe. They may have been fired, but the details of the affair would not be as public as the details of this affair are. The blatant publicity of this affair may make it harder for all those involved in the scandal to move on, a consequence that would probably not affect a similar low-profile incident. Events like these raise a huge question about whether those in higher positions, like Petrino, should be subject to different consequences and punishments as those who hold smaller positions.