On Tuesday at 12 p.m., President Obama gave a speech encouraging students across the nation to "take responsibility for their lives, for their education, and set goals for themselves" this school year. Despite critique that regarded the speech as propaganda, the President delivered an important message to America's children. 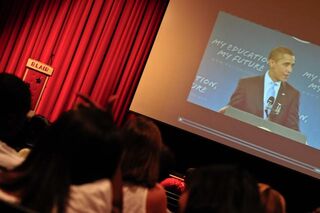 Photo: Obama speaks, via weblink, to Blazers in the auditorium about the importance of staying in school and learning.

Photo: Obama speaks, via weblink, to Blazers in the auditorium about the importance of staying in school and learning.

Obama was broadcast live throughout the country from Wakefield High School in Arlington, Virginia. After an introduction by one of Wakefield's seniors, the President opened with a story about his own early mornings in class, held at his kitchen counter in Indonesia where his mother taught him extra school lessons. He spoke about the importance of taking responsibility for your education, and reminded students that no matter your situation, education is key to success in life.

This was the main focus of the speech: education equals success. Countless conservatives were worried that the speech was propaganda glorifying democratic ideals, but policy of any kind was never mentioned. All Obama told kids was that staying in school and working hard is the best way to achieve. He didn't tell us that we needed to improve test scores so we can meet a standard, and he didn't pressure us to outperform students in Europe or anywhere else. He encouraged us to do our best; the most important message students of any political affiliation can receive.

Obama conveyed the message in a kid-friendly way, addressing the students of the nation directly. He connected with students and provided a role model for children who might not have one anywhere else. In addition, every student can tell you that increasing educational success been a priority on the nation's agenda since Bush was inaugurated. Obama's encouragement was crucial, and it was refreshing to see him use his popularity among youth to achieve national goals.

In his speech the President also stressed the importance of hard work and perseverance. "The story of America isn't about people who quit when things got tough. It's about people who kept going, who tried harder, who loved their country too much to do anything less than their best." Many times the need for hard work was mentioned in conjunction with the need to help the country, and yet again, Obama's words were true. Telling kids that their country needs them isn't a scare tactic used to raise grades; our generation needs to work hard at school so that when it's our time to lead, we're prepared to handle any problem our country faces.

President Obama needed to inspire students. He needed to remind us that we're working for more than an SAT score, that we're more important than a statistic or graduation records. His speech prompted us to ask for help, never give up, and take failures as lessons. Our generation needs education, hard work, and responsibility in order to step up and prepare for the future. Whether it was watched in class or disregarded as socialist babble, what Obama had to say was nothing but the truth.