Blair Varsity baseball won its seventh game in a row Wednesday night, taking down the Wheaton Knights 10-0 to improve to a record of 12-3 on the season. This game comes after Tuesday night's division clinching 5-4 victory at Walt Whitman High School, the team that knocked Blair out of the playoffs last year.

Blair was able to vanquish Wheaton with a lineup made up almost solely of sophomores who played this season at the JV level. The first at bat of the game set the tone for the rest the contest, with starting pitcher Sasha Tidwell striking out Wheaton's leadoff batter on three pitches. He then set down the next two Knight batters for a 1, 2, 3 first inning.

On the offensive side, Blair started off the first inning with a bang. Senior Max Salzman made it to first after being hit by a pitch. He then stole second base, took third on a passed ball, and scored on a high pop up off the bat of junior Ian Donaldson that fell in front of the Wheaton center fielder. Catcher Aaron Clingman hit a sacrifice fly to score Donaldson and a misfielded throw from the Wheaton catcher to second base allowed sophomore Sam Strongin to score. Coming out of the first inning, Blair led 3-0. 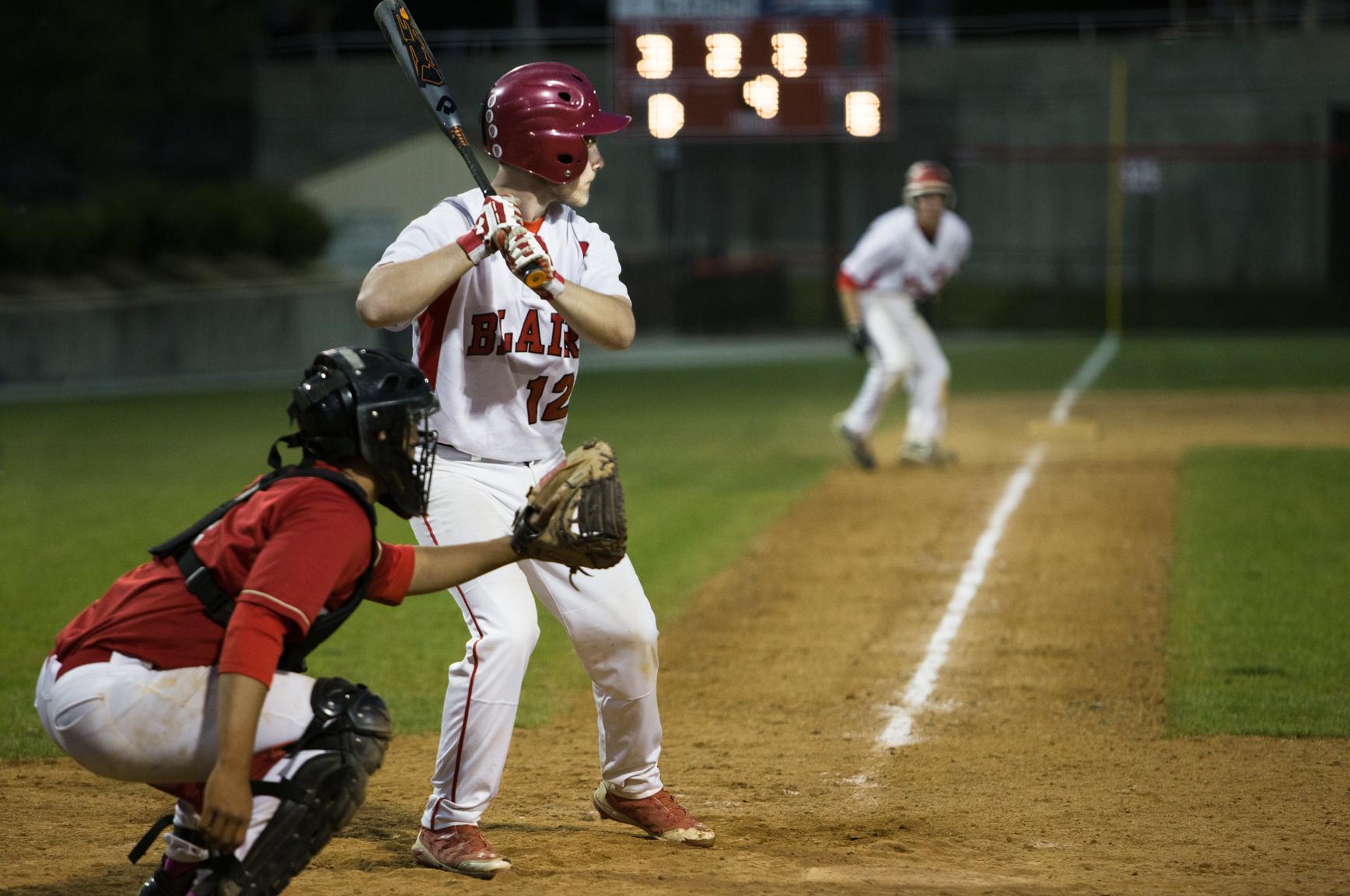 Tidwell retired the side again in the top of the second inning. In the bottom of the inning, junior Richard Moglen and Tidwell made it on base and were driven home by a single off the bat of Strongin for a score of 5-0.

At this point in the game, Coach Eric Zolkiewicz started substituting a number of sophomores and older backup players into the lineup. In the top of the third, junior Noah Buchholz pitched Blair's third 1, 2, 3 inning in a row. "I felt pretty good about how I pitched," Buchholz said. "I was hitting the strike zone, which I sometimes have trouble doing. That's especially important against a team like this."

Sophomore Ben Yokoyama started in the fifth inning, and became the third Blair pitcher to retire the side. Blair's bats tacked on two more runs in the fifth for an eight run lead. In the sixth, Blair closed the deal, finally invoking the mercy rule on a single off the bat of Richard Moglen that scored senior Sam Merrill, bringing the final score to 10-0. 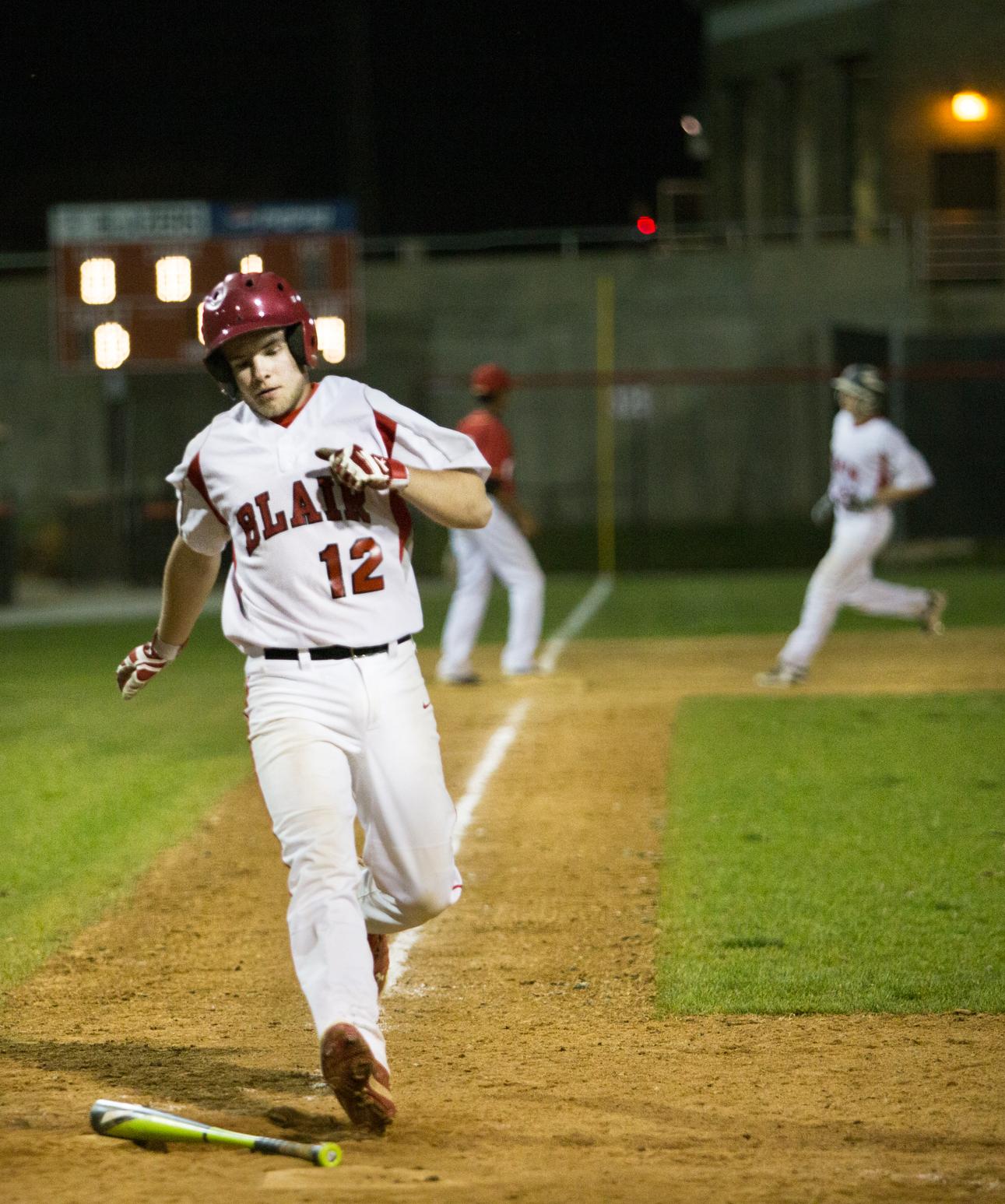 Photo: Blair easily disposed of the Wheaton Knights, forcing the mercy rule in their rout.

Photo: Blair easily disposed of the Wheaton Knights, forcing the mercy rule in their rout. Photo courtesy of Connor Smith.

Both Buchholz and Coach Zolkiewicz were complementary of the performance of the younger players. "They got a little taste, and that's a good experience," Zolkiewicz said. "I think they played really well," said Buchholz. "It's important that they get some playing time because they'll be the core of our team next year."

Blair takes this victory only two games before the beginning of playoffs. After clinching their division against Whitman, Sophomore Ryan Bratton feels that Blair has good momentum. "If we keep this number one seed, we can come into the playoffs with confidence," he said. "We need to play carefully and treat every team like their Whitman."