The Baltimore Ravens and the San Francisco 49ers duked it out for the highly coveted title of Super Bowl Champions this past Sunday. And though the Ravens may have taken home the Lombardi, Beyoncé was the real winner, capturing both our hearts and the title of MVP in halftime show history. 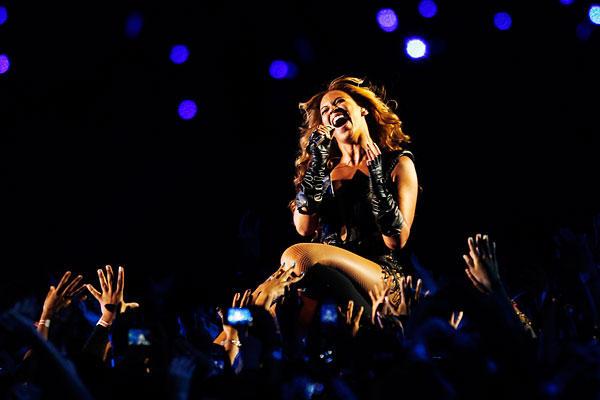 Beyonce at the Super Bowl

Photo: Beyonce had viewers in a trance during her near flawless halftime performance.

Photo: Beyonce had viewers in a trance during her near flawless halftime performance.

Two weeks ago, Beyoncé endured some criticism after allegedly lip-syncing the National Anthem at the Presidential Inaguaration ceremony. Everyone knew that Beyoncé was performing at the halftime show, but after the inauguration scandal, critics and fans alike were unsure how she'd perform. The authors of this article will most likely face severe consequences from the Illuminati for ever doubting Beyoncé but luckily we were proven wrong. On Sunday night, Beyoncé gave one of her most memorable performances as she showcased pure talent, and might we add, with a bangin' body even after giving birth a little over a year ago.

The show began with a silhouette of Beyoncé's body and with screaming fans, that all seemed to be in a trance, running towards the camera. As the lights shone on the stage, the beautiful Queen B seemed to illuminate with the voice of an angel. Then she started dancing, and viewers were taken back to the reality that despite her voice, Beyoncé was a far cry from angelic; seductive more aptly described her head banging, booty popping routine. She sang her most popular hits, including everyone's favorite, "Crazy in Love," and even became Jamaican for a few minutes when she commanded the audience to "DUTTY WINE!" (Side note: She made a better island girl than Rihanna ever will.)

We thought we had seen the best of the performance, but then, her old backup singers Michelle Williams and Kelly Rowland literally popped out of the ground in a moment of shock for viewers. Inactive since 2006, we almost forgot about Beyoncé's original two minions – err, group mates from Destiny's Child – Michelle and Kelly. Although their microphones seemed to be turned off, the girls at least looked good (well, Kelly did; Michelle looked awkward and out of place as always – some even said that she was the stepdaughter of the group), and it rekindled memories of our tweenage years. Making sure that nobody steals her spotlight (although such a thing is near impossible), Beyoncé quickly dismissed them off the stage and ended the show with "Halo." At this point, the crowd and viewers alike were hypnotized.

The entire performance was composed of strange shapes and symbols, possible reminders that the Illuminati and Father Jay-Z are watching. Always watching. At one point, Beyoncé even threw up the Illuminati symbol, to remind us that we are all peasants under the kingdom of Jay-Z, Beyoncé and baby Blue Ivy.

Aside from Beyoncé (as if we could ever push the thought of Beyoncé aside, but for the sake of this story we will try to for at least a mini paragraph), Alicia Keys sang the national anthem for the Super Bowl, accompanied by her piano, as usual. While Keys sounded like she always sounds, a bit on the whiny side but still nice, she did the unthinkable: she added an extra line to the National Anthem. We are not sure whether it is disrespectful, creative or a sign that the Illuminati are coming, but we just know that it should not have been done.

We do not like to describe ourselves as "haters." But considering the success of the risqué, spiced up halftime show this year, especially in comparison with Bruce Springsteen and The Who of years past, we wouldn't be surprised if another fresh face was invited to perform for next year's game. Who knows, it could even be our good friend, Rihanna, the less talented but also less clothed version of Queen B. Though we predict some honest effort from her, we'd like to bet that nothing can surpass even a minute of Beyoncé's 2013 Super Bowl performance.