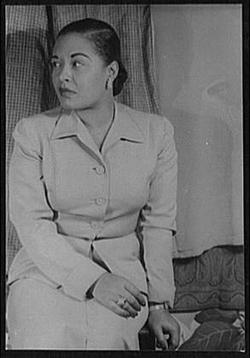 There are many reasons to cherish the legacy of Billie Holiday: her raspy one-of-a-kind voice, her unique spirit that propelled her career and the powerful lyrics that only she could sing make up Holiday's significant role in jazz-music history. In addition, Holiday's songs, such as "Strange Fruit," a dark and realistic narrative of the racism she witnessed in her short lifetime, secure her significant role in Black history.

Though not many facts are documented in Holiday's life, it is known for certain that she was born in Philadelphia on April 7, 1915. Holiday had a tumultuous childhood, which left her with the emotional scars she would sustain for the rest of her life. Her father, Clarence Holiday, was a guitarist for Fletcher Henderson and left Holiday and her mother when she was very young. In the wake of the father's absence, Holiday's mother did not play a strong role as a guardian; instead, she neglected her daughter.

After getting through her harsh upbringing, Holiday pursued singing in small clubs located in Harlem. At one of her performances in 1933, John Hammond took a great deal of interest in Holiday's music and had her immediately begin recording with Benny Goodman. The recordings with Goodman were only moderately successful but still got Holiday's name out into the New York music scene. Between 1932 and 1942, Holiday's new recordings received much more attention than her debut and brought her immediate stardom. It was during this time that she recorded some of her most recognized songs: "Strange Fruit," "God Bless the Child," "Lover Man" and "Don't Explain." Despite her rising success, Holiday began a self-destructive heroin addiction that landed her a jail sentence in 1947 for a year and that caused her eventual death at the age of 44 on July 17, 1959.

Though her life ended in much sorrow, Holiday will forever stay a source of inspiration to many. Her phenomenal trademark music is not forgotten, her personal words ring hauntingly and her songs depicting the horrors of racism still remind one of the importance of racial equality.

Information has been compiled from Scott Yanow's biography. Additional information and the picture are from ladyday.net.