On Sunday Jan. 7, 19 million people turned the TV on to watch the 2018 Golden Globe Awards. This year, the awards show did more than just announce the winners of "Best Supporting Actress" or "Best Motion Picture." Many viewers may have noticed a common wardrobe color among many the movie stars: black. This was not just by coincidence, but was a coordinated effort which expressed two simple words:

Photo: Oprah strongly condemning sexual assault in her speech at the Globes.

The #TimesUp movement is a unified call for change from women in entertainment to women everywhere. From a movie set to a concert stage, this movement addresses the systematic inequality and injustice in the workplace that have left many women feeling unworthy and powerless. Though effective to a extent, strong statements need to be made by important figures, both male and female, denouncing sexual harassment. As a follow up from the ongoing #MeToo movement, women and men at the Golden Globes wanted to wear black to show support for victims of sexual assault and violence, and to acknowledge the huge imbalance of power. Although both genders were part of the movement, just wearing black is not enough to really bring awareness to the sexual harassment and discrimination women are facing.

Aziz Ansari had a successful night, winning Best Leading Performance in a TV Comedy, and delivering a short but entertaining speech. He did wear black, seemingly to support the movement, but definitely did not mention anything about gender discrimination or sexual harassment before, during or after the show. And just a few days later, his name pops up in the news with a very unexpected accusation: sexual assault. The woman accusing Ansari published an account of what happened on the website Babe, claiming that "she went consensually to his apartment after a date but Ansari was overly aggressive in pushing her for sex." None of this can be proven true, but is another woman sharing her personal experience with a man, who was even part of a movement to support women, who allegedly sexually assaulted her. How effective is a movement when its "supporters" contribute to the culture it is trying to change? 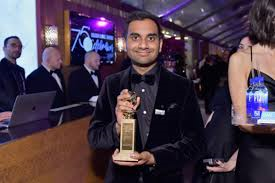 There were many other men who chose to wear black, maybe to show respect to women or to feel like part of the movement. However, not a single one of them used their platform to mention the overarching purpose of that night. Luckily, notable speeches from powerful women such as Natalie Portman and Oprah Winfrey proved the effectiveness of Time's Up. They not only wore all black, they spoke up when given the opportunity, they used their platform to protest, and most importantly, they took society just another step closer to equality in the entertainment industry.

Noticeable choices in award shows have often contributed greatly to civil rights causes. Bronwyn Cosgrave, fashion author and former editor for British Vogue and Vogue India, dubbed the concept "political dressing" and told the New York Post that it "has been part of awards season really since the beginning." The world of fashion attracts a broad audience to witness a milestone in the course of this movement. The 2018 Golden Globes was the first time in award show history where women coordinated their color schemes to draw attention to the inequalities in the entertainment industry. And it was certainly powerful. According to analytics platform Talkwalker, viewers tweeted #TimesUp "roughly 473,900 times."

The night of stars and noteable red carpet fashion may have passed, but the Time's Up movement is just beginning. The strong statement made at the Golden Globes needs to be followed up by strong support of end harassment culture at the workplace, if the time is truly up.