The Blair Blazers (12-9) beat the Churchill Bulldogs (11-11) Friday by a score of 60-41. Blair struggled against Churchill the first time they played, winning by only four points, but in this matchup the Blazers' strong defensive play, comprehensive scouting report, and dominance in the low post bolstered them to a victory.

The first quarter opened with a quick layup by senior forward Jordan Cobb, who hustled back on defense and helped cause a Churchill turnover. On the Blazers' next offensive possession, Cobb once again featured prominently, snagging two rebounds to keep the play alive. The ball eventually found its way out to his brother, junior forward Julius Cobb, who scored a long two. Blair continued gaining momentum, with Churchill's only two points of the first five minutes coming from free throws. The last thing the Bulldogs needed was for Blair to get hot from three, but the Blazers shot well in the opening minutes. Senior guard Tucker Nosal drained two from beyond the arc, giving Blair a 15-8 lead. 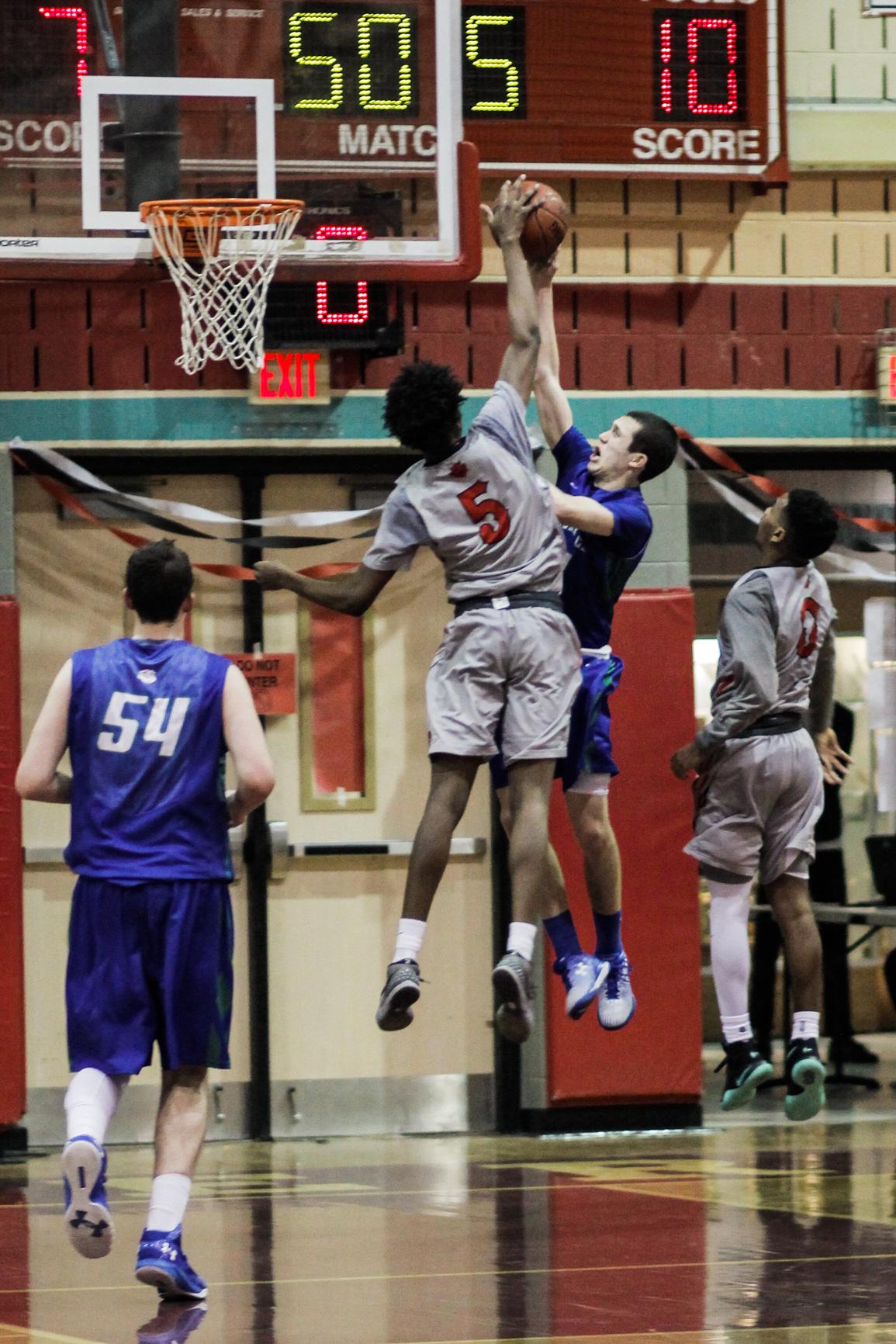 The second quarter opened much like the first, with a big block by Jordan Cobb in the first minute and another long two for Julius Cobb. Blair's big men dominated down low, but also showed enough range to force Churchill to guard the arc. This gave Blair's guards more room to work, with junior Kendall Douglas putting in two buckets. Blair controlled all aspects of the game, scoring from a set offense and in transition, with senior guard Max Burke closing out the quarter with a fast break layup to give Blair a 24-14 lead.

According to Burke, the Blazers' defense, which kept the Bulldogs to a season-low 14 points in the first half, was what gave them the upper hand in the early going. "We moved the ball around really well, made our shots in transition, but it all really came from our strong defense," said Burke.

Blair came out of the second half with all the momentum, and just kept grinding out the points. In the 18th minute Nosal hit his third three pointer of the game, followed quickly by a driving layup by junior guard Demetri Cooper. The Blazers had a significant loss midway through the third, however, when Nosal came out of the game holding his lower back. His replacements held the offense together, including a pair of twos by senior guard Jared Williams and a fast break layup by Burke. The quarter ended with a huge swat by Julius Cobb and an 11 point Blair lead, 38-27. 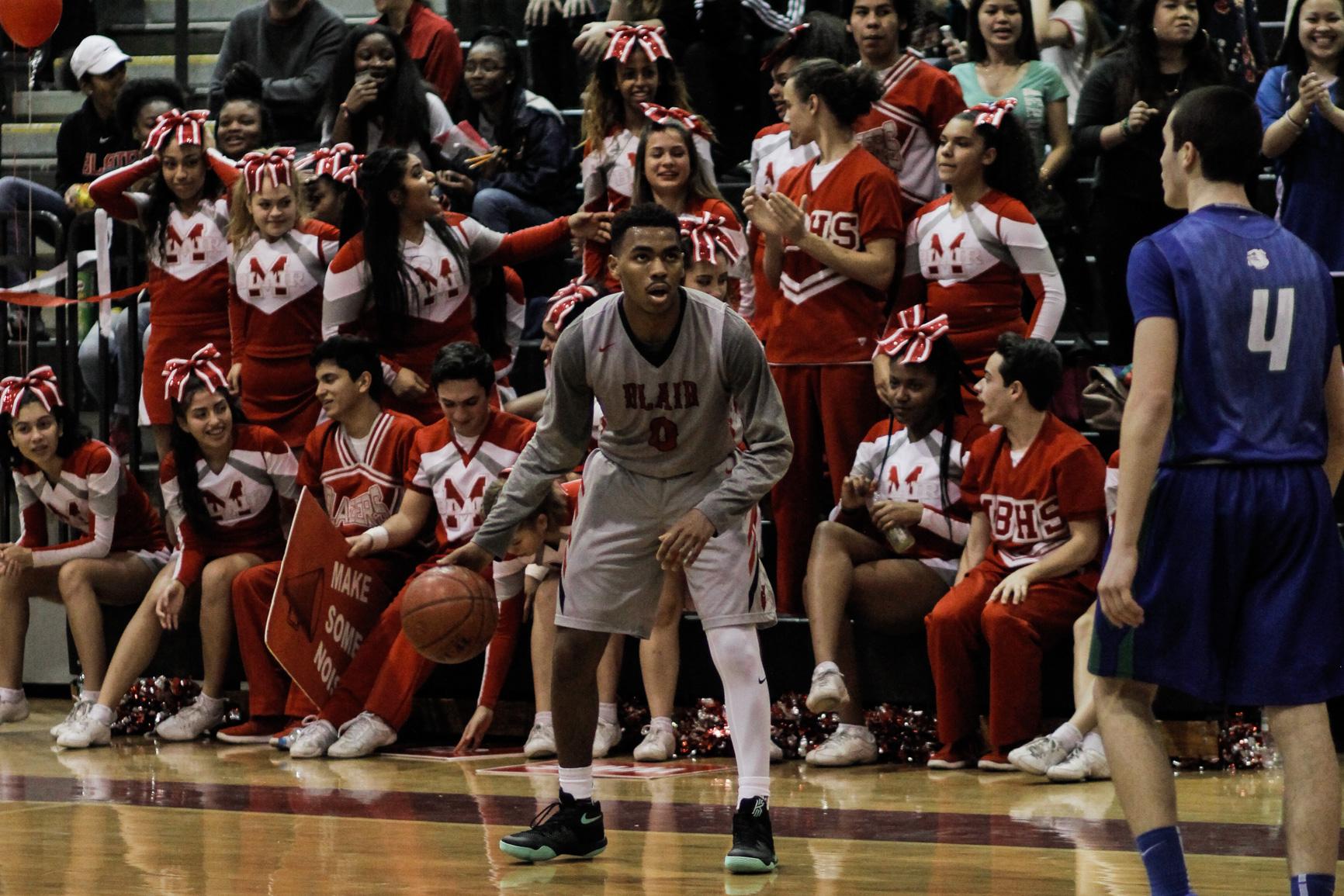 The Blazers went into the fourth quarter ready to put Churchill away. Burke grabbed a steal and made a fast break layup, and on the following possession was fouled and put in both free throws. Julius Cobb contributed his own pair of twos, followed by yet another block. With the game out of reach, the Bulldogs began to foul, but thanks to Blair's consistency from the free throw line, the lead was insurmountable. The game ended with Blair up by 19, 60-41.

According to head coach Damon Pigrom Sr., the victory was in no small part thanks to their experience playing Churchill. "We did a good job taking away their strengths. [Their center] really hurt us the last time we played, but our guys managed to lock him down," explained Pigrom. Blair still has work to do when it comes to rebounding and recovering loose balls. "We need to improve on the 50/50 balls. We need some of those possessions, and on this journey, we can't be allowing the other team to take advantage of them," said Pigrom.

Julius Cobb attributed the victory to the team's consistent shooting. "We made our shots down low, and hit most of our free throws," explained Cobb. Blair's forward has high hopes moving forward in playoffs. "If we keep playing the way we did tonight, we should be alright," said Cobb.