Richard Montgomery pulls away for a seven point victory

The Blair Blazers (1-1) lost to the Richard Montgomery Rockets (3-0) 40-33 Monday. The low-scoring defensive battle remained close until midway through the third quarter, when the Rockets started to pull away thanks to solid free throw shooting and fast break points coming off of Blair turnovers.

The game began with Richard Montgomery winning the tip and setting up a high screen, leading to a short jumper to open the scoring. After three minutes without a score thanks to a pair of turnovers for each team, Blair began to implement a full court press with five minutes to go in the first quarter. Senior forward Christopher Larkins managed to draw contact in the low post, making both free throws to bring the game even at two apiece. Just fifteen seconds later, senior guard Demetri Cooper fed the ball to sophomore forward Ethan Ellis on a fast break resulting in an easy Blair layup. 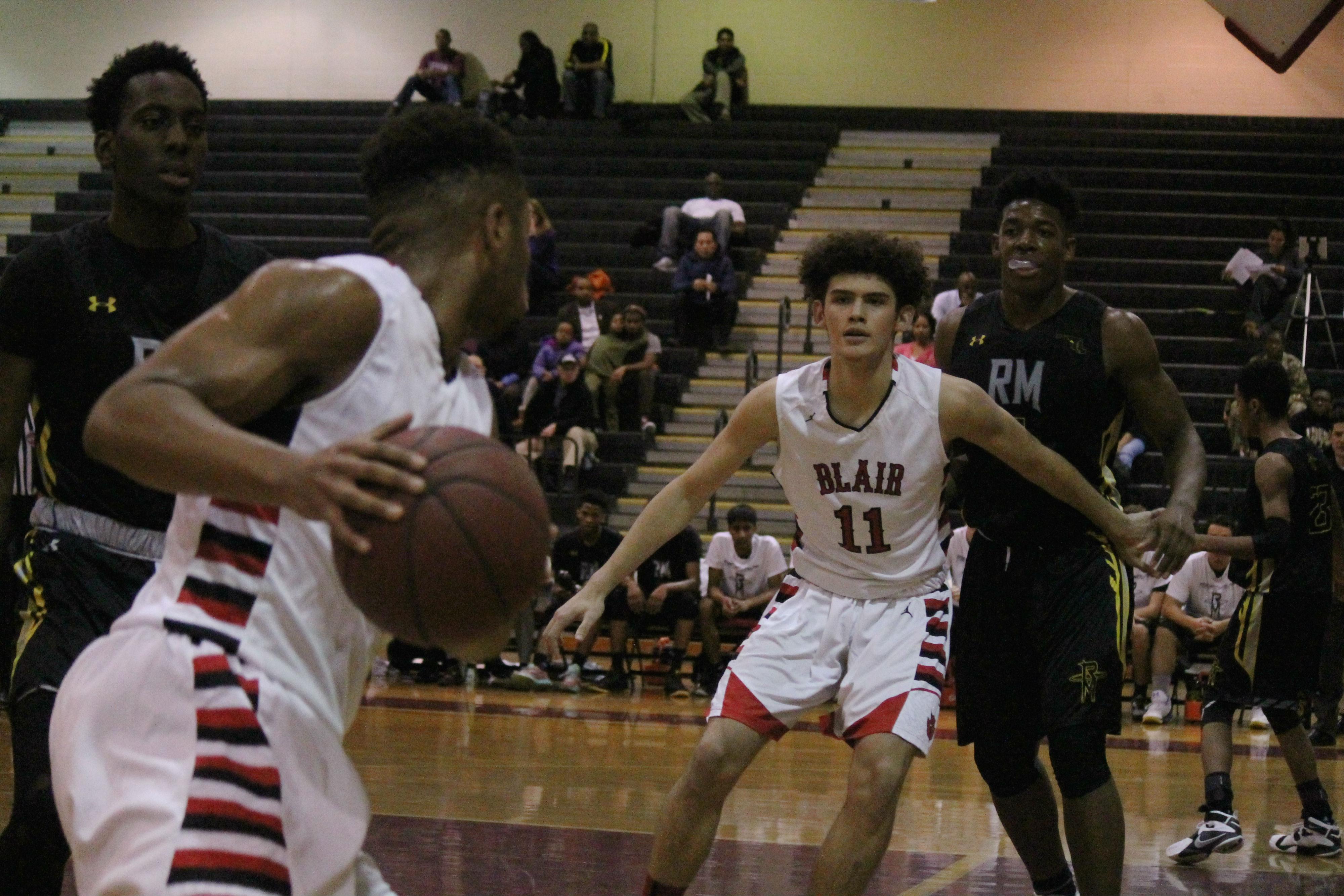 Photo: Senior center Jack Smirnow fights to get open for an inbounds pass.

Both teams started to heat up on offense, with senior forward Julius Cobb drawing the foul on a low post fadeaway and hitting one of two free throws. A minute later, Cobb got the ball at the top of the key and nailed a long contested two, putting Blair up by five. Following a Richard Montgomery timeout with two minutes to go in the first, sophomore guard William Tawamba grabbed a steal, but the possession was lost on an errant pass out of bounds. A minute later, the Rockets drilled the first three of the game, and the quarter ended with a tough baseline jumper by Tawamba to beat the buzzer.

The second quarter started with a few Richard Montgomery misses forced by Blair's defense. A minute in, Cobb drove from the corner and pulled up for a ten-footer. The Rockets responded with a beautiful spin move to set up a two point layup. In the fifth minute, a Richard Montgomery offensive rebound lead to more points. The scoring stalled until the twelfth minute, when the Rockets sunk a baseline two, and Blair came back with a two powered in at the low post by Cooper.

Senior guard Malik Lee blocked a shot down low with four minutes left in the quarter. The teams went back and forth playing tough defensive basketball for the remainder of the half. Cobb came up with another key block, and the Blazers made two of four from the line, but Richard Montgomery managed to squeak into the break with a one point lead, 20-19. 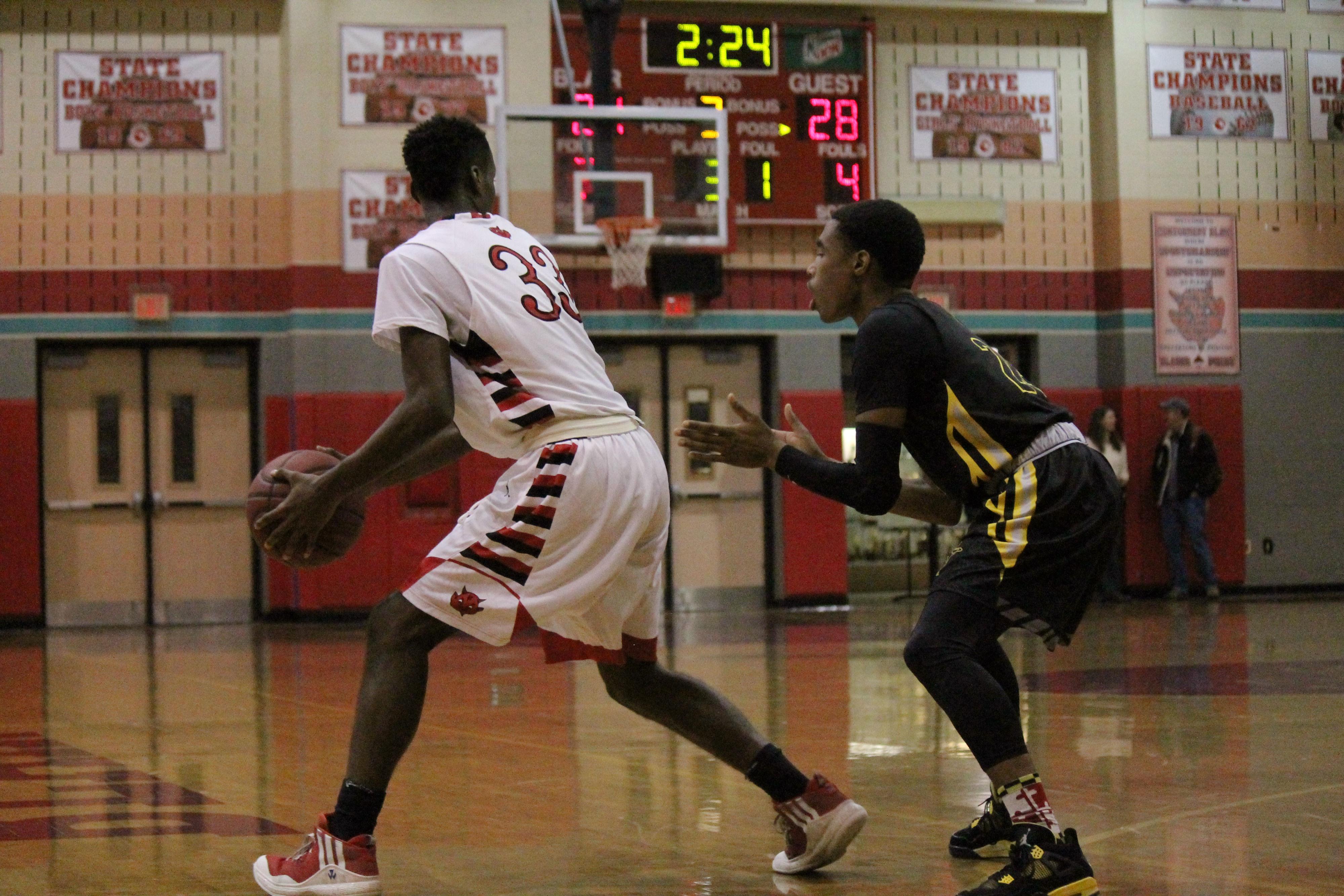 According to Cobb, the key to the Blazers' strong performance in the first half was the team's defense. "We played defense well and limited their second chance points," said Cobb. Only two of the Rockets' first half points came on second chance opportunities, and Blair had three blocks as a team going into the third quarter.

The first two minutes of the second half, neither team was able to work the ball past the other's defense, with Richard Montgomery putting up the only two points. In the 19th minute, junior guard Anthony Smith-Davis hit a wide open mid range two to get the Blazers back on the board. A pair of putback twos off of offensive rebounds by the Rockets, along with four free throws, gave them a commanding lead. Several Blair misses, a couple of turnovers, and a huge dunk by Richard Montgomery made the third quarter one to forget.

Twenty seconds into the fourth quarter, senior guard Hau Le knocked down a corner three in an attempt to start the Blazers' comeback. That effort was stymied, however, by another pair of quick Blair turnovers in the 26th minute. Neither team was able to score, despite a valiant effort by Lee, diving on a loose ball and calling a timeout with three minutes to go and Blair down six. Smith-Davis also managed to hit a pair of long twos, but in the waning moments the Blazers went zero for four from the line and the Rockets made five of eight, icing the game at a final score of 40-33.

According to head coach Damon Pigrom, the Blair team did a good job on defense but was unable to convert its opportunities into points. "Defensively, we were really good. Richard Montgomery is a good team, and to hold them to 40 points with us fouling at the end was a pretty good effort defensively," explained Pigrom. The coach added that the team needs to make better use of its offensive possessions. "We still need to work on taking care of the ball. We have too many turnovers, and unfortunately for us, our turnovers happen in bunches. Our total number of turnovers probably wasn't that bad, but they came in waves of twos and threes," said Pigrom. 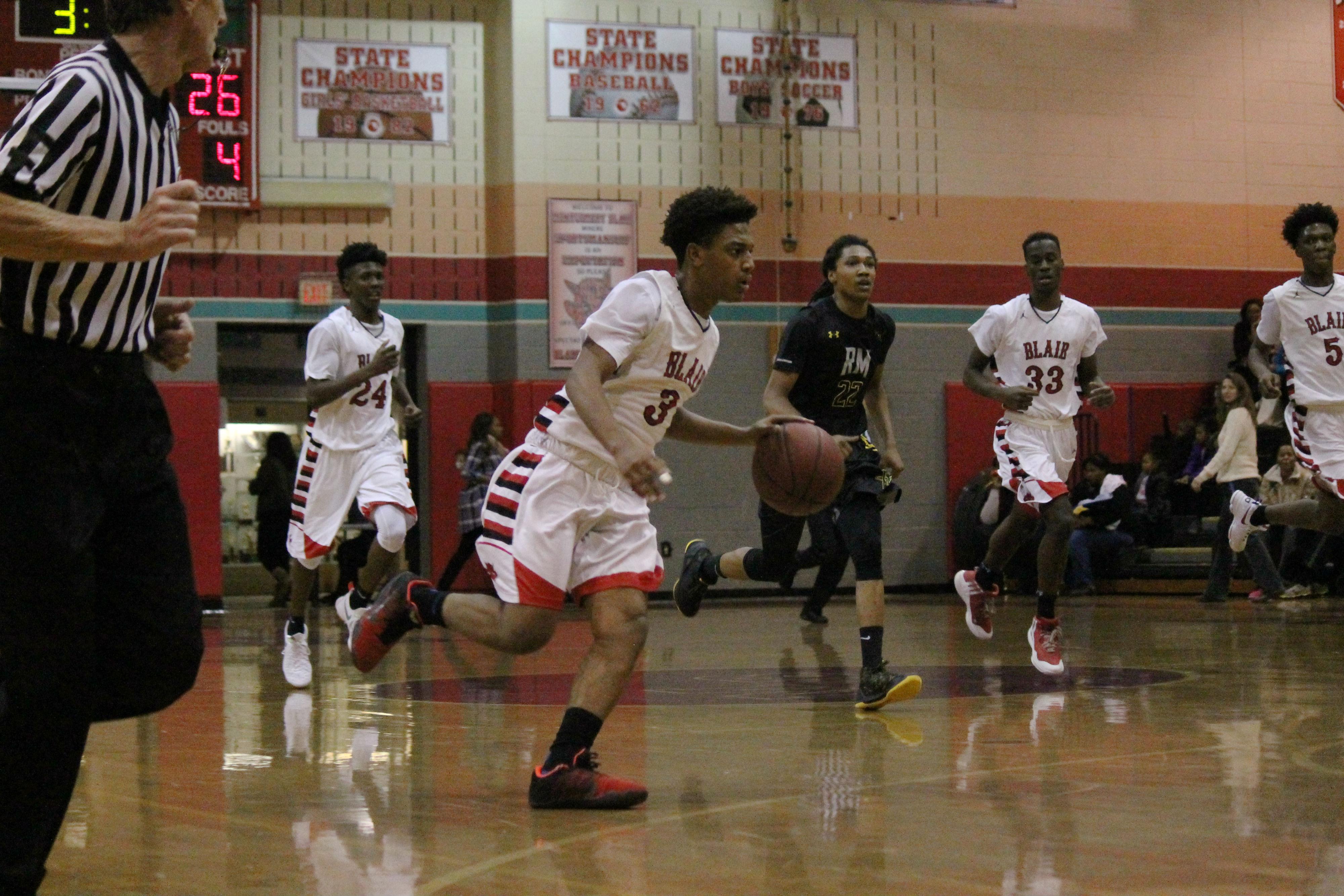 Get'cha Head in the Game

Moving forward throughout the season, the Blazers just need to put up more points in order to keep up with opponents. According to Smith-Davis, "We did a good job of getting out in transition, and we held the ball for a long time but we couldn't convert. We just need to work on scoring offensively." The Blazers will try to do just that on Wednesday away against the Walter Johnson Wildcats (0-2).