The Blair Blazers (2-4) secured a win against the Northwood Gladiators (1-5) with a score of 44-41 during their game on Tuesday, January 5th. After the first half, the Blazers were well ahead of the Gladiators, but didn't last long. The defense fell of in the third quarter, letting the Gladiators refocused offense close the gap and tie themselves up to the Blazers. By the end of the game, both teams were exhausted from a long, strenuous and well fought battle. 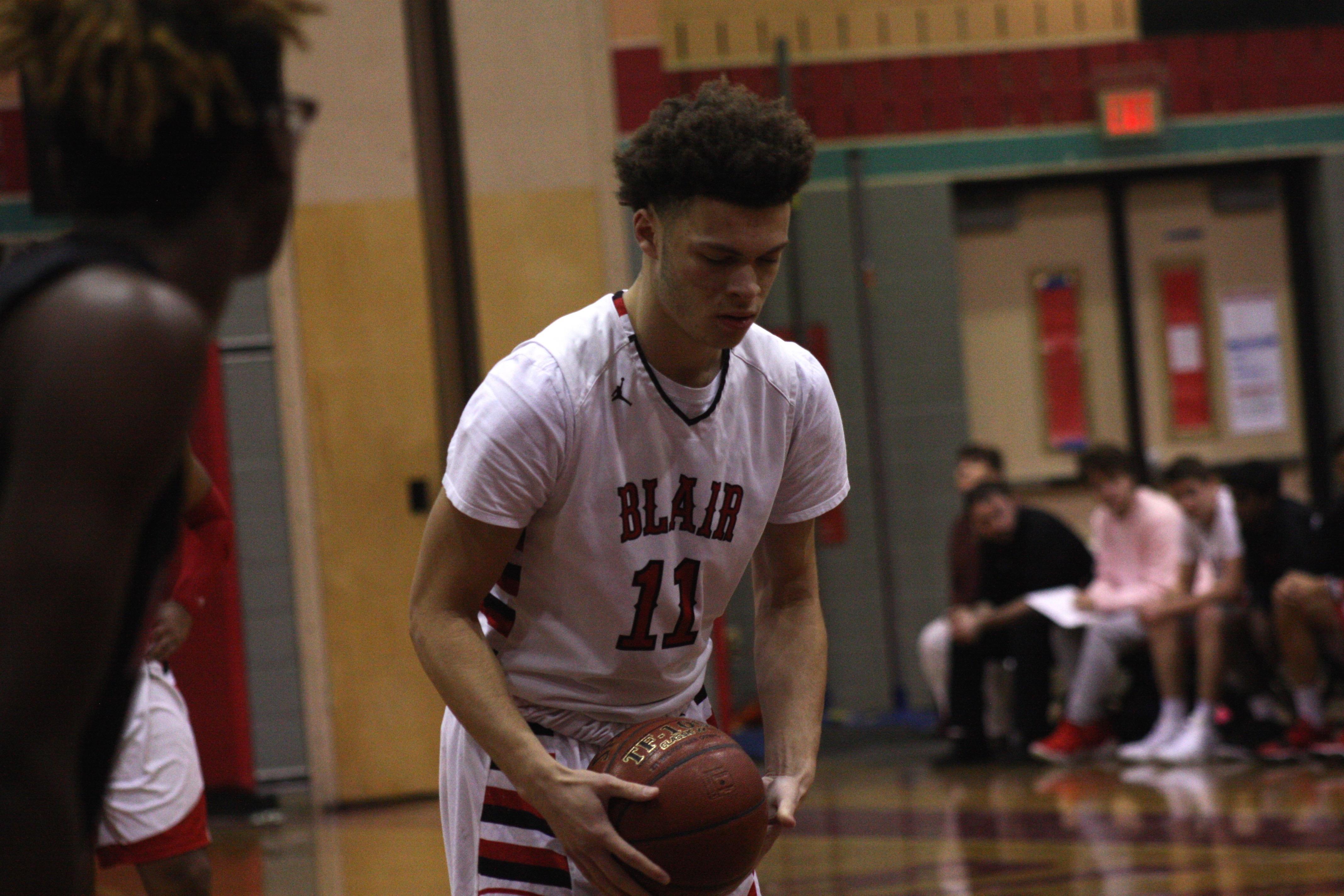 Northwood won the opening tip and took control of the ball, only to turn it over almost immediately, leading to freshman Alfred Worrell Jr. scoring the first basket. The back and forth continued until junior William Tawamba got fouled on a drive to the net, and made one of two from the line for the Blazers. The Gladiators were quick to respond, and used long passes to break through Blair's high pressure defense and make a basket, bringing the score to 3-2.

Determined to keep their lead, the Blazers made two more buckets to extend their lead to five before the Gladiators were able to break through Blair's defense again. Both teams kept up the fight, each scoring once more to bring the score to 9-6 nearing the end of the opening quarter. The Gladiators stepped up their defense in the last few minutes of the quarter, blocking all of the Blazers shot attempts and shortening Blair's lead to one, until Tawamba drained a three pointer in the last 15 seconds, giving the Blazers an 11-8 lead.

The excitement of the first quarter continued into the second, with senior Nathaniel Worku scoring a lay up shortly after the start of the quarter. The Gladiators worked hard to try to keep up with the Blazers, but continued to fall short on offense, allowing Blair to keep them at arms length for much of the contest. Junior Ethan Ellis furthered the Blazers' lead after getting to the line for the first time and making the first basket of his free throw, followed quickly by a Worku three-pointer. Tawamba then put the Blazers even further out in front with a tricky lay-up in the paint amidst Northwood's defense. All of a sudden, the Gladiators trailed 19-11.

Worrell and Tawamba continued to push the Blazers' strong offense, each scoring a contested basket before Worrell got to the line on another drive, where he capitalized and made both free throws, bringing Blair up to a 26-13 lead with a minute left in the half. The Blazer defense was able to hold out again, giving Blair the last possession of the half. And, with two seconds left, senior Anthony Smith-Davis made a quick jumper, ending the first half 28-13.

After a terrible third quarter that saw Blair's lead dwindle down to a mere three points, the Blazers stepped up their defense against the Gladiators apparently revamped offense. The third quarter had turned out flat because of the Blazers' lack of rebounding, allowing Northwood a second chance to try to turn the score around. "Defensively we do a good job, but we're not rebounding, we're not collecting on our paycheck," he said.

The fourth quarter, throughout which the Blazers pushed to keep their lead, saw the game tied with less than two minutes left on the clock. The Gladiators were only in the lead once after breaking t the 39-39 tie with a lay up, but the Blazers stood their ground, with Ellis drawing a foul on the next possession and making both free throws to tie themselves back up to the Gladiators, 41-41. Blair's defense held in crunch time, and three more free throws, two from Smith Davis and one more from Ellis helped Blair secure another win with a final score of 44-41.
The Blazers will play again this Friday, January 5, against the Cavaliers at Kennedy HS at 7:15.