Thursday night's matchup between the varsity boys' basketball teams of Blair (6-5) and Sherwood (8-6) was a hard-fought, physical game in which each team matched the other blow for blow. Neither team led by more than six points for the duration of the contest, and the game was tied at 46 with 30 seconds to play. However, the Blazers struck last on a tip-in by senior forward Julius Cobb with less than a second left on the clock to escape with a 48-46 win.

The physicality of the game was evident from the start, with both teams aggressively attacking the basket. Blair and Sherwood only made three combined three-pointers all night. "That's the way we've played all year. We want to be in attack mode," Blair head coach Damon Pigrom said. 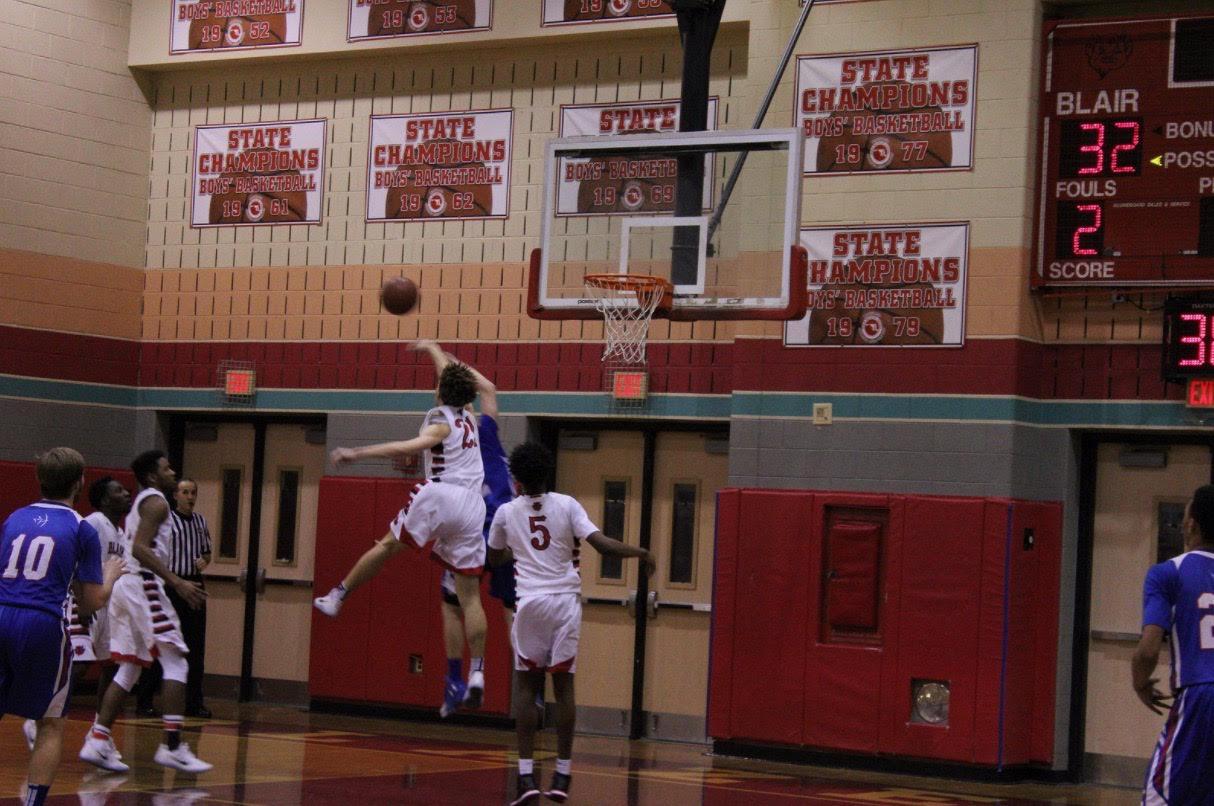 The game began with Sherwood receiving the opening tip-off. However, the Warriors turned the ball over, and the Blazers were the first to score on a fast-break layup by sophomore forward Ethan Ellis. The Warriors responded by sinking one of their two three-pointers of the night. Sherwood maintained its lead throughout the first quarter until senior guard Malik Lee was fouled on consecutive possessions. Lee sank three of the four free throws to put the Blazers ahead 9-8. But Sherwood scored on a driving layup to take a one point lead into the second quarter.

Blair jumped out to a fast start in the second, as scores from Cobb and senior guard Kendall Douglas helped the Blazers to build a 21-16 lead. Still, Sherwood refused to let the Blazers pull away. The Warriors put together a dominating 9-1 run to close out the half, and the Blazers entered the locker room facing a three point deficit.

Yet again, the Sherwood lead did not last long. The Blazers began another strong run out of the break, scoring the first seven points of the half, including a three pointer by senior guard Demetri Cooper. Sherwood bounced back to tie up the game at 29, but Lee silenced the Warriors by scoring through contact and draining the following free throw attempt. Nonetheless, Sherwood continued to stay with the Blazers, pulling to a 35-35 tie entering the final quarter.

For the third consecutive time, the Blazers built up a solid lead at the beginning of the quarter. Buckets by Cobb and Ellis helped give Blair a 41-35 edge. However, mistakes by Blair allowed Sherwood to crawl back into the game. Sherwood scored off of a Blair turnover to draw within one point. The Warriors and Blazers battled until the final possession, when Blair had the ball with the game tied at 46. After several shot attempts and offensive rebounds by the Blazers, they finally scored as Cobb tipped the basketball in just before the buzzer sounded.

Cobb's shot gave the Blazers a two-game winning streak, after Blair defeated Northwood 62-42 on Tuesday. "I was excited. It felt pretty good," Cobb said of his game-winning tip.

Despite the thrilling victory, Pigrom was not completely satisfied with the Blazers' performance. "We have some things we need to clean up. Offensive execution needs to be better, offensive rebounding needs to be better," he said.

The Blazers will face another tough challenge on Monday when they travel to Blake to face the Bengals (8-6) at 7:15 p.m.