The Blair Blazers (4-3) beat the Springbrook Blue Devils (3-4) 54-48 on Friday night. The intense game was neck and neck the entire way, with both sides coming up clutch at the right moments. Blair was able to come out victorious thanks to sound defense and great free throw shooting.

The game began slowly, with Blair leading 12-8 at the end of the first quarter. Although both teams would have the lead at different points, the largest lead for both was just four points until the closing minutes of overtime. Springbrook was able to keep the game tight due to a few crazy plays that changed the momentum, including a monster dunk by Springbrook forward Cameron Rucker that made it a two point game in the second quarter, and ignited the Springbrook crowd. 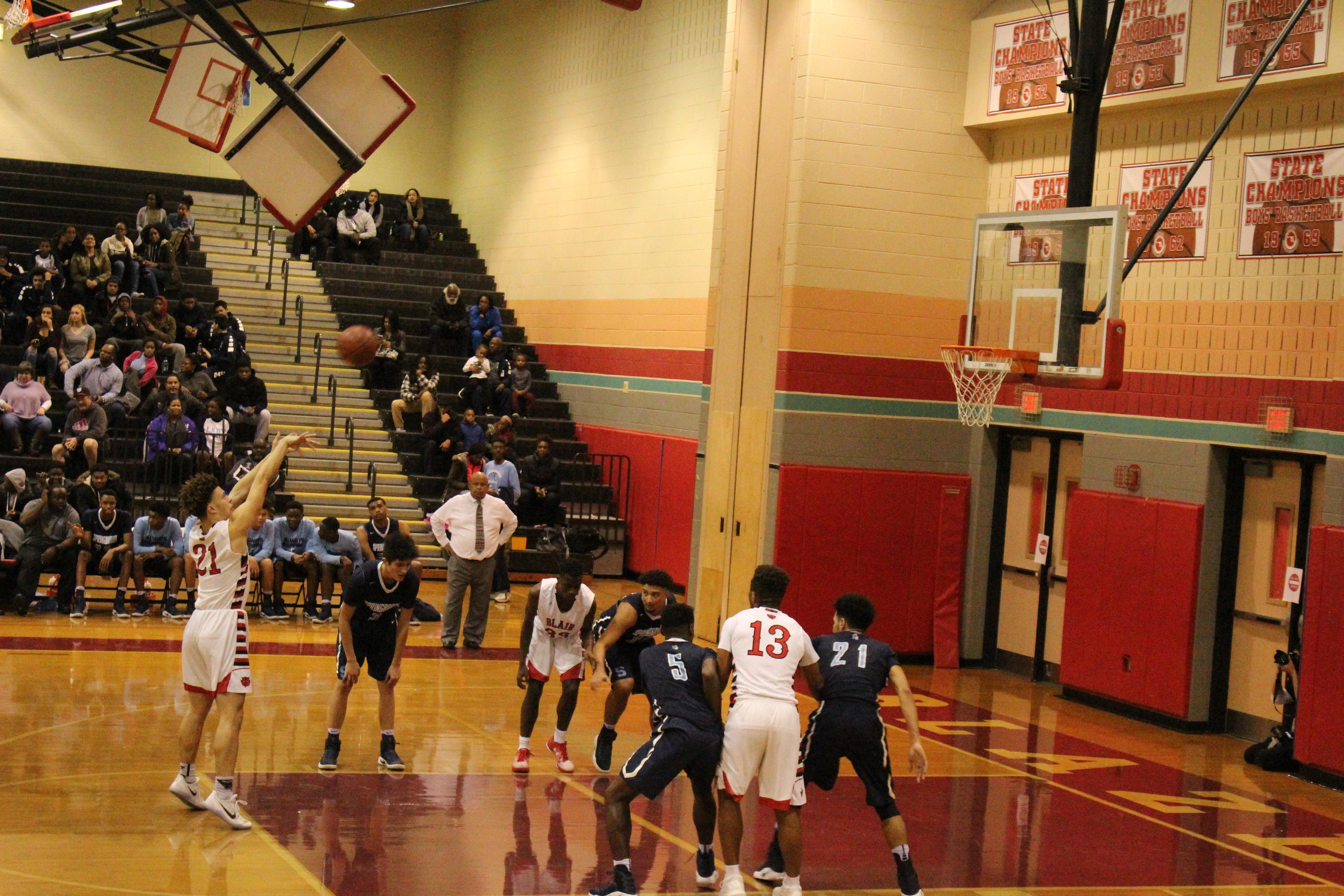 Other than a few explosive plays, Blair's solid man defense was able to limit the Blue Devil guards and create turnovers. After a few back to back layups by both teams, Blair sophomore Ethan Ellis was able to draw a foul on the last play of the first half. Ellis hit both his free throws to give Blair a 23-19 lead at halftime.

While Blair seemed to have control in the first half, the second half was a back-and-forth nail biter. Just thirty seconds into the half, Springbrook hit a jumper to make it a two point game. Blair point guard Kendall Douglas was able to respond immediately with a strong layup. Springbrook began to wake up again in the third when their point guard hit two three pointers in a row. The Blair crowd was silenced, and Springbrook had the lead 28-26, with less than five minutes to play in the third quarter.

Springbrook was playing a two man trap at the half line, trying to limit the ability of Blair guards Douglas and Cooper to make plays. But Blair was able to stay composed, break down the trap and get the lead back. After forcing a turnover to end the third quarter, Blair had regained the lead, 35-32.

Springbrook's offense was re-ignited in the 4th, making Blair hard pressed to keep their lead. Blair's home crowd went quiet after Springbrook quickly cut the lead to one point. And right when it looked like Springbrook was going to take the lead, Blair center Julius Cobb, who finished the night with 13 points, lit up the gym with enormous back-to-back blocks. But Springbrook was able to rally again and charge ahead for a 40-39 lead with less than two minutes to play. This would be their last lead of the game.
After another huge block from Cobb, Blair went the length of the floor and Cobb hit a layup and was fouled. He made the and-one to complete the three point play and gave Blair a 42-40 lead with under two minutes to play.

Without a shot clock, Blair creatively passed the ball around Springbrook and took precious seconds off the game clock. Springbrook fouled Blair guard Demetri Cooper with 33 seconds to play. Cooper was only able to make one free throw, keeping it a one possession game.

After rushing down the court in a last ditch effort, Springbrook missed the game-tying three with 14 seconds on the clock. The Blair faithful went wild, expecting the game to be over. Springbrook intentionally fouled Douglas with less than 10 seconds on the game clock and Douglas only hit one of two free throws to make it 44-40 Blair.

Incredibly, Springbrook guard Anares Escobar hit a three with 5.4 seconds left. Cooper was fouled on next play and hit both clutch free throws with 4.2 seconds to play. Blue Devil Matthew Balanc, who scored a game high twenty points, hit his fourth three-pointer of the game from the top of the arc as the game clock expired to send it to overtime. The crowd on both sides of the gym went crazy and Blair faculty had to keep students off the court.

All the fans were on their feet for the four minute overtime. An intense defensive struggle ensued, with neither team scoring a point for nearly two minutes of the overtime. Costly turnovers limited opportunities for both teams. Douglas lit up the Blair fans by hitting a three and recapturing the lead for Blair with only 2:15 left. After some back and forth scoring, Cobb hit a huge jumper with 25.2 seconds to extend Blair's lead to five points, and put the game out of reach.

Blair's defense was able to clamp down in overtime, and only surrendered two points in four minutes to knock off the Blue Devils. Free throw shooting and solid man defense were key in Blair's victory. Blair went 21-31 from the line, and they were able to create turnovers and get big blocks to smother Springbrook's offense.