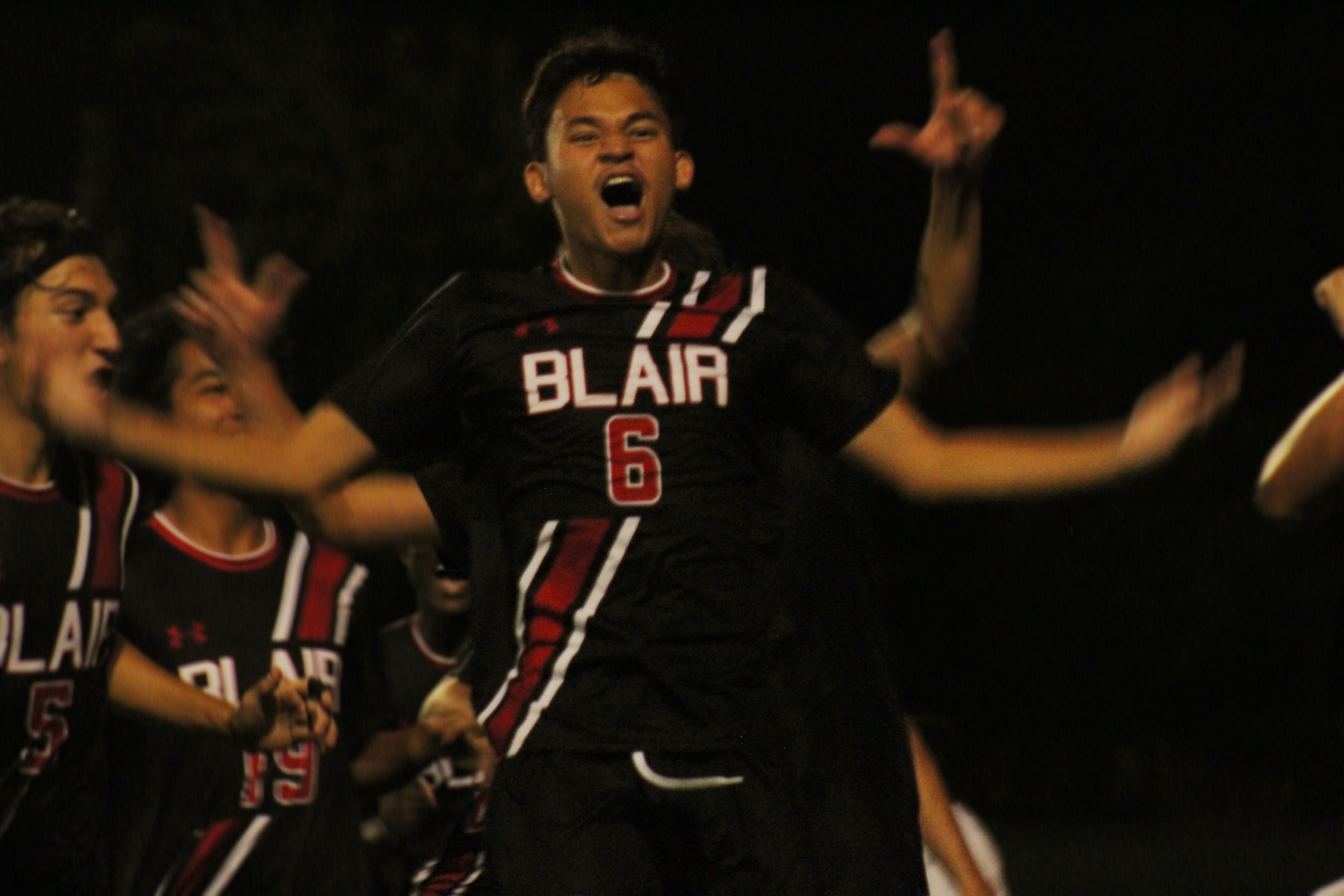 On Sept. 14, Blair (0-1-1) tied Damascus (0-1-1) with a score of 1-1. The Blazers consistently made great defensive plays as well as beautiful passes offensively, but failed to close out with a win.

Blair dominated the beginning of the first half, penetrating the Damascus defense with strategically placed passes. An early through ball from junior forward Gabriel Marra-Perrault, followed by a near miss from junior midfielder Oscar Rivas, foreshadowed much of the gameplay that was to come in the half.

Damascus eventually brought the ball to Blair’s side of the field, but due to senior captain center back Niaza Tamini’s outstanding leadership of the Blazer defense, they were unable to find the back of the net. After some more back-and-forth gameplay, Marra-Perrault found an opening in the Hornets’ defense near the goal, but was quickly confronted by a Hornet defender, resulting in a slightly-wide missed shot.

With 15 minutes left in the half, both teams became impatient and began committing a handful of turnovers, constricting any progress to move down the field. Ultimately, when either team approached the opposing side, both teams exhibited impeccable defense, utilizing clean side-tackles and interceptions that prevented many scoring opportunities.

At this point in the game, tensions in the crowd and on the field were beginning to rise. With seven missed shots from Blair and dozens of great offensive passes, the Blazers’ fans were on-edge. Coming into this game, Blair had predicted a nonchalant sweep over the Hornets, but as the game progressed, it became clear that this wasn’t an accurate prediction. 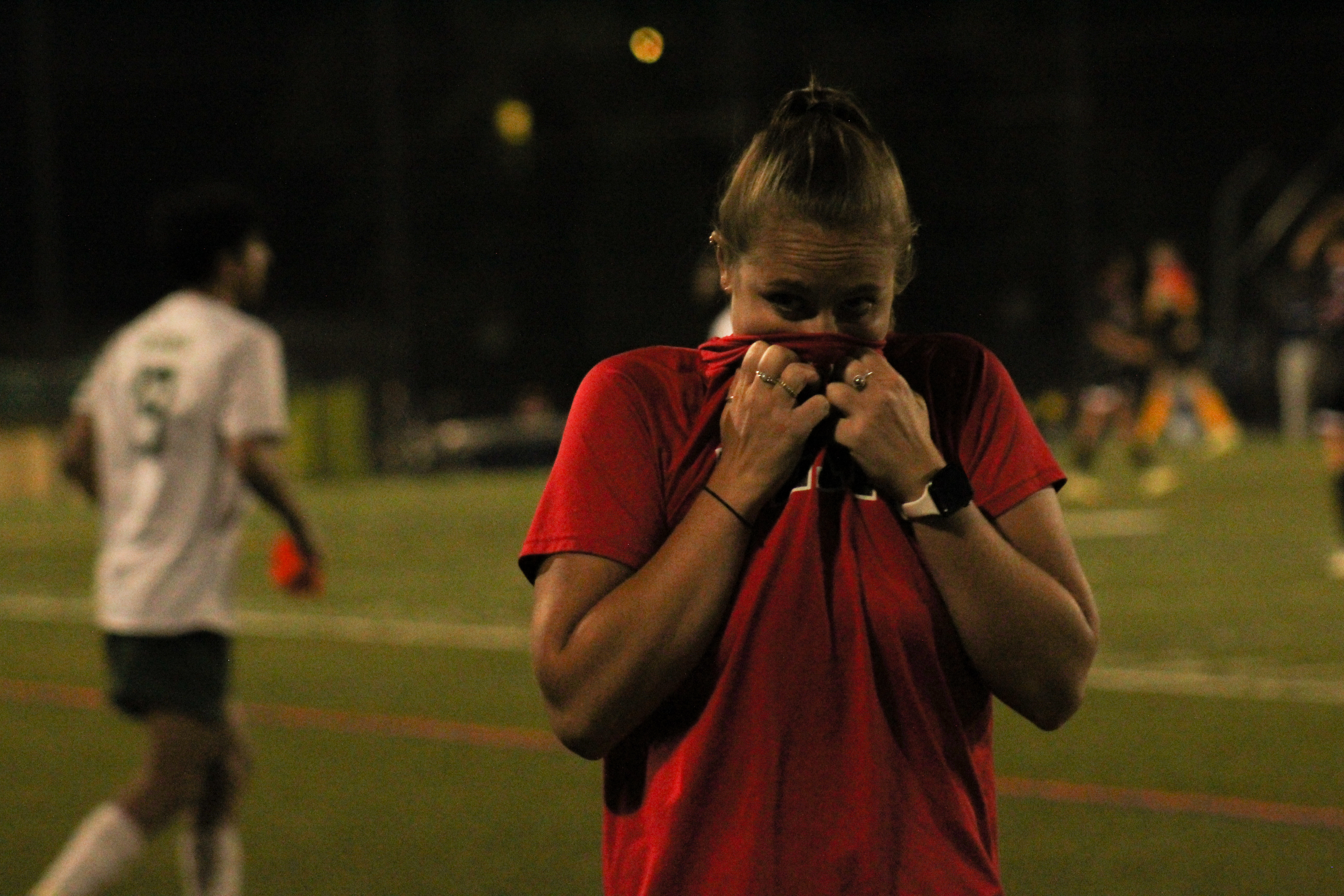 Photo: Blair head coach Allie Coyle reacts as the Blazers move the ball downfield in the second half

Photo: Blair head coach Allie Coyle reacts as the Blazers move the ball downfield in the second half Photo courtesy of Henry Reichle.

The first half ended with even possession from both sides. Blair had many opportunities to score, but had trouble finishing. On the other hand, Damascus encountered less offensive opportunities, but Blairs’ lockdown defense smothered any hopes of scoring.

In sharp contrast with the Blair-dominated first half, Damascus had the Blazers on their heels right out of the gate. For the first twenty minutes of the second half, possession was heavily in the Hornets' favor. Blair’s previously crisp passes and precisely placed through balls were now consistently being intercepted by the Hornets' back line and midfield.

Damascus took advantage of Blair's turnovers and continuously drove the ball deep into Blair territory. The Hornets found space to move the ball and set up an offense in the Blazer midfield. Blair head coach Allie Coyle attributed the excessive open space to Damascus' possession dominance throughout the start of the second half and admitted they needed to work on that.

"Shifting, covering each other on defense, covering the space. We leave the middle of the field open a lot and we need to shift back and over as our defense shifts over. So we really need to work on - I like to call it our ship or boat - you gotta rock, you gotta go side-to-side and swing with [the ball]."

With less than five minutes elapsed in the second half, Damascus drove down the left side and sent the ball into the box with strikers waiting to pounce. The ball was booted around for several seconds, leading Blair goalie Caleb Johnson away from the goal line. The ball then found its way to the right side of the box in the possession of the Damascus offense. With a wide-open goal, the Hornets capitalized and took a 1-0 lead at the 45 minute mark.

Fortunately, the Blazer defense continued their strength and was able to confidently ward off any other threats before they became chances for Damascus. Junior right back Sohccem Ruphael, making his varsity debut, and Tamini worked in tandem throughout the contest to quickly extinguish these offensives.

Damascus kept the foot on the gas for the next fifteen minutes. At this point, the Blair student section came alive. Their thunderous cheers for the Blazers carried over onto the field. The momentum shifted in Blair's favor.

In the 69th minute, Blair was awarded a free kick from just 15 yards out. Junior midfielder Kevin Quincin stepped up, steeled himself, took the shot, expertly curled the ball over the wall and beyond the keeper's gloves, and majestically sunk the ball into the top-right corner of the net. The student section was rewarded for its cheers and the Blazers were rewarded for their defensive effort and offensive persistence as they both jubilantly celebrated the game-tying goal.

With the game at a deadlock, both teams settled into their tactics of choice. Damascus chose to "park the bus" and concentrate all of their players on the defensive side of the ball. Blair repeatedly attempted to mount an offensive from the uncontested midfield, but the sheer amount of players crowding the Damascus back line prevented Blair from penetrating into a position where they could score. 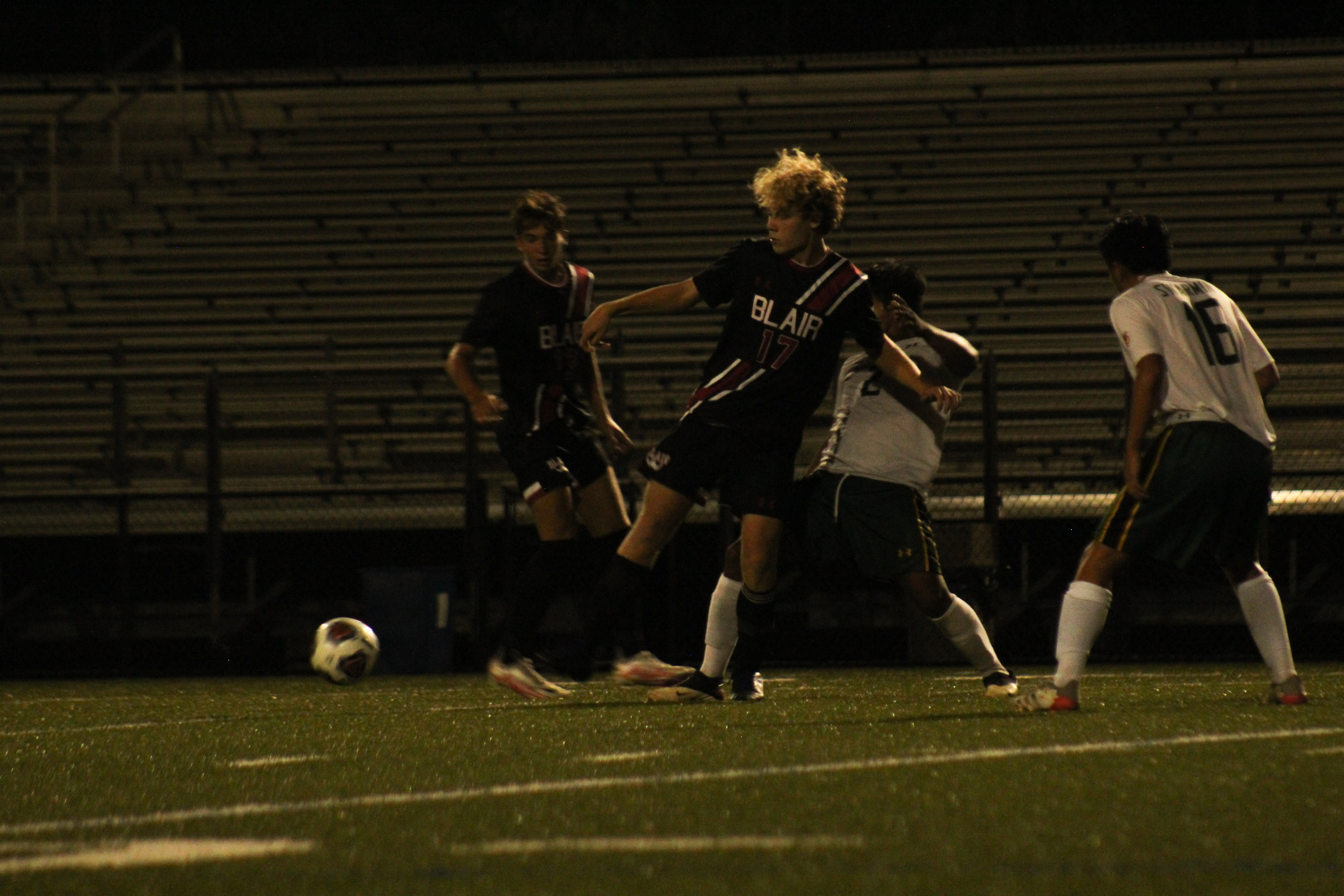 Emotions soared, with hard tackles roughing up both sides. At one point, Coach Coyle was awarded a yellow card for arguing a controversial foul call against Blair. Blair senior captain and striker Francisco Hidalgo sent a long-range screamer off the crossbar at the 81 minute mark.

Blair had opportunity after opportunity to score, however they weren't able to put the ball on goal. Players either hesitated or instead looked for an additional, unnecessary pass, closing the window of opportunity for the shot.

The horn sounded before either team added to the scoreboard, so the game went into the first period of extra time. In high school soccer, any goal scored in extra time immediately wins the game. The Blazers were awarded another free kick around 15 yards out with less than 30 seconds into the period. Quincin once again took the shot, but his effort was saved by the keeper. The first extra time ended without any other significant chances for either squad.

The second period then commenced with the Blazers kicking it off. Halfway through the period, the Blazers had a golden opportunity to win the game at point-blank range. However, to the dejection of the Blair fans and bench, the Damascus goalie made the save and play resumed. Several minutes later, Quincin dribbled through what seemed like the entire Damascus defense but was unable to convert the chance. Eventually, the horn sounded, concluding a 120-minute, dissatisfying tie.

Coyle said she thinks Blair's weaknesses were problems that could easily be addressed in practices, such as converting chances into goals. "Offensively, we need to finish. We had shot after shot after shot and, I mean, on-frame would be great, and then we can work towards actually getting it on the net," she said.

Coyle added that in addition to the stellar defense, another positive was Blair's passing. "I liked our ball movement. There were numerous times when we went from one side of the field to the other side of the field. And I liked when Kevin took on like five players inside the box on his own. If only he would have finished! But we have so many threats up top, now it's just getting the shots to go," she explained.

After the game, Ruphael expressed his disappointment in starting the season behind the expectations that people had for the team before it started. "A lot of people had high expectations for us. We'll see what happens, but we'll try to exceed those expectations. As of right now, we don't have a great record. I hope we can turn that around."

The Blazers' next home game is Tuesday September 20 at 7:15 PM. Tickets can be purchased here or at the gate.

The Silver Chips Print sports staff contributed to this story.