SGA pushes for peace across the school

Blair Congress, the Student Government Association (SGA)'s newest branch, has come up with a school-wide poster initiative to promote peace and ease racial tensions. Blair Congress created 10 different posters with sayings such as "Together We Stand" to hang up around the school for the Blair community to see. 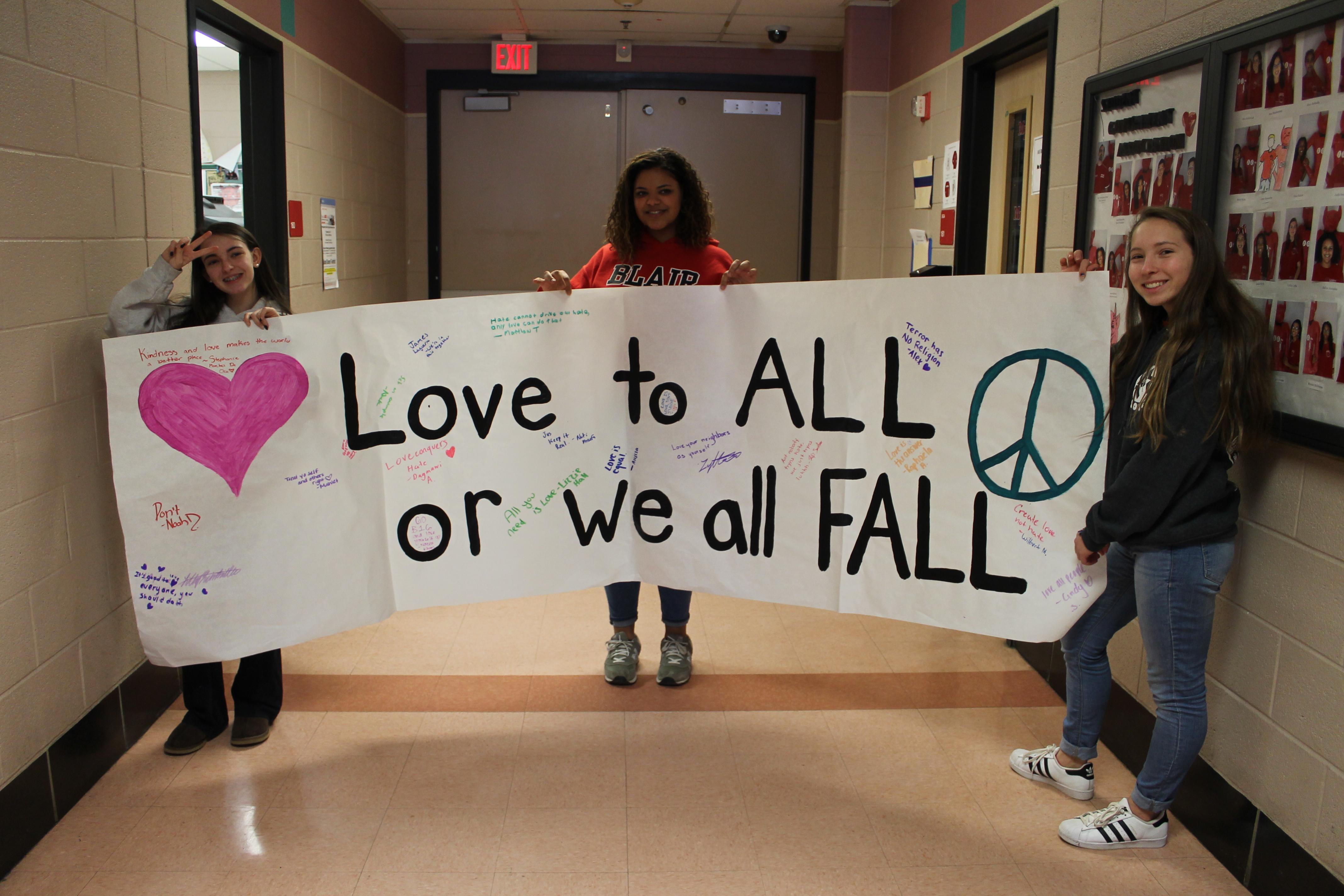 Photo: Blair Congress's "Love to all or we all fall" poster will be hanging in the SAC to be signed by students during lunches!

Photo: Blair Congress's "Love to all or we all fall" poster will be hanging in the SAC to be signed by students during lunches!

The impetus for the project came after a few Muslim students approached Principal Renay Johnson regarding blatant Islamophobia last month, and she conveyed their sentiments to the Blair over the intercom. "Blair Congress came up with this in response to the incident involving the Muslim students who were met with Islamophobia," SGA member senior Alexandra Melinchok said. Blair Congress had an initial discussion regarding Islamophobia in the Media Center soon after the announcement, but then decided to take concrete action against racism. "The issue was brought forth for discussion at the December Congress meeting," Blair Congress member and sophomore class President, Divya John, stated. "As a group, we started talking about ways to spread awareness about social issues like that one and many people agreed upon the idea of a poster initiative."

Blair Congress's next step was to create a large poster with the saying: "love to all or we all fall" and obtain signatures from members of the Blair community. "We're going to write the main slogan of the campaign on a big white rollout poster and we're going to have people come sign it during lunch in the SAC," Melinchok said. Blair Congress then plans to hang the poster up in Blair Boulevard or the SAC so that Blazers can see the peaceful and inclusive community the school promotes. "The objective of the initiative is to unify Blair and to make sure that our school environment is always welcoming and friendly to all students," John said. The main agenda of the campaign, as Melinchok and John stated, is peace, and combating inconspicuous forms of racism and hateful speech through creating an accepting atmosphere at Blair.

The final important step in Blair Congress's plans is to have a series of student-led discussions regarding Islamophobia, race tensions, and microagressions in the Media Center. Blazers interested in getting involved with this initiative and similar ones can join Blair Congress. "Anyone can come to Congress, but it's led by the SGA and all class councils attend the meetings," John said.