Blair field hockey demolishes Northwood in the Battle of the Boulevard 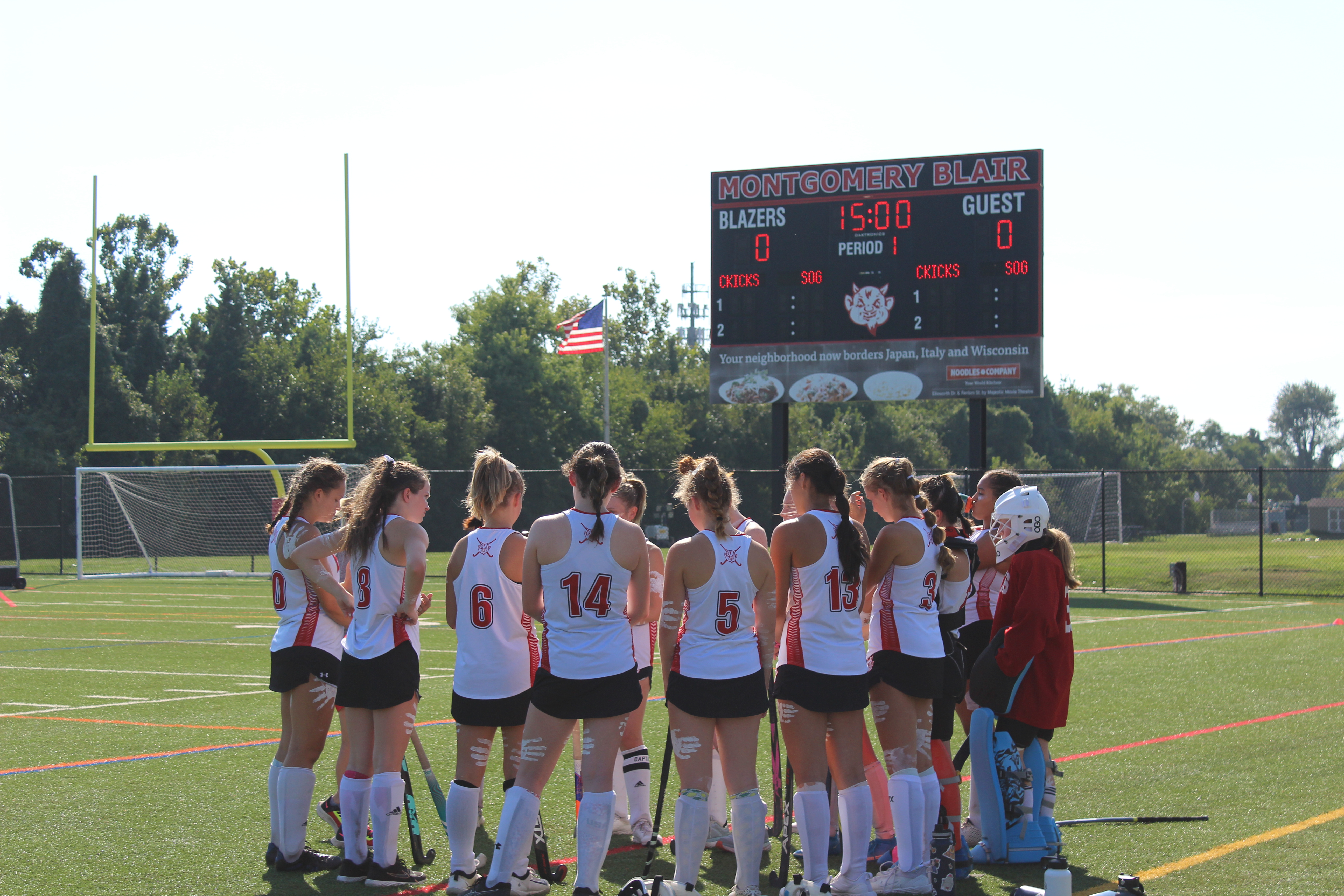 Photo: The Blazers rally before the start of the game.

Photo: The Blazers rally before the start of the game. Photo courtesy of Maggie Megosh.

On Sept. 21, the Blazers (3-2) conquered the Northwood Gladiators (2-1) by a score of 8-0. After a slow start in the first quarter, the Blazers built momentum until their offense overpowered Northwood for a two-game win streak.

The pace was slow in the first quarter, but Blair dominated possession nonetheless. The Blazers piled on penalty corners left and right, each a high-stakes opportunity for Blair to score. Northwood’s goalie stopped all of Blair’s shots, but the Gladiators had yet to make any advances on Blair’s side of the turf.

Blair’s chance was in the last ten seconds, where they earned a penalty corner. Junior defender Laila Burege handed the ball off to sophomore forward Carmella Beach, who was in position for a golden opportunity. Right before the buzzer sounded, Beach scored Blair’s first goal of the match, ending the quarter with Blair up by one point.

In the second quarter, Blair’s offense kept the foot on the gas and made several quality shots that were unfortunately saved by the Northwood keeper. At this point, the Gladiators were struggling to keep up with the Blazers offensively. A lone shot by a Gladiator outside the striking circle made its way into the net, but it fortunately did not count due to a penalty on the play. Possession of the ball quickly returned to the Blazers, who picked up right where they left off with offensive pressure. The first half ended with a score of 1-0.

Photo: The Blazers celebrate one of their eight goals against Northwood.

Photo: The Blazers celebrate one of their eight goals against Northwood. Photo courtesy of Maggie Megosh.

The Blazers’ already impressive offensive stride rapidly picked up in the second half. Within the first three minutes, Beach scored three goals, each more daring than the last. Northwood was tiring out – Beach managed to dash past their line of defense and swiftly picked up a goal each time. “Four for four!” members of the crowd shouted, referencing Beach’s jersey number and encouraging her to convert a fourth goal.

Beach’s goals put Blair up by four points – the Gladiators were going to have a rough time catching up. Senior captain Delia Chen certainly didn’t help either; before Northwood could even process the score, Chen scored two back-to-back goals to make the score 6-0.

The Blazers scored five goals in the first six minutes of the third quarter, and their offense stayed strong until the end of the quarter. Blair’s defense was noteworthy, as well. With seven minutes left in the quarter, the Gladiators earned a penalty corner. Northwood’s initial shot was quickly cleared by the barricade of Blair defenders. Keeping possession of the ball, Blair’s teamwork stayed strong until the quarter concluded with a final score of 6-0.

The final quarter began similarly to the third, with the Blazers having an offensive head start. Within the first thirty seconds, the Blazers were already in the striking circle looking for an opening. Senior captain Karis Tebo spinned into the circle before taking a shot, which was blocked by the goalie. Only moments later, freshman defender Lilah Coleman took control of the rebound and notched another goal for Blair, making the score 6-0.

There was barely any contest in midfield – the Blazers kept possession of the ball for nearly the entire quarter. Even in the game’s last few minutes, Blair had their eye on the prize, though the Gladiators were prepared to defend. However, the Gladiators’ defense fell through with three minutes left on the clock, when Chen once again raced past Northwood’s defenders and tallied another goal.

Looking to bring their score into the double-digits, the Blazers persisted with their advances until the final buzzer sounded. Blair’s amazing performance in the match was sealed with a final score of 8-0.

Head coach Holly Stofa noted that even though the team had a slow start, they put their best effort in the game. “It was a little bit more of a roller coaster than maybe it needed to be [since] we were a little slow in the beginning, but they turned it around… everyone demonstrated their skills today.”

Beach, while thrilled with the match’s outcome, expressed that games are about more than just winning. “Having a game that we can be proud of is definitely the final goal,” she said. “A win is always great, but we just want to be proud of how we played.”