Blazers push the defending state champions but come up empty-handed

The playoffs don't begin until next week for the Blair Blazers (8-2), but they still had to face an intimidating foe on Friday night: the Damascus Hornets (10-0). The Hornets had not lost a game since the 2014 3A state finals, and they kept that streak alive by edging the Blazers 35-27.

The game was a tale of two halves: the first half was a shootout while the second half was a defensive battle. In the first half, the Blazers matched the Hornets punch for punch until the Hornets began to build a lead before halftime. The stout Damascus defense held Blair scoreless throughout most of the second half until a last-minute touchdown pass.

Damascus marched down the field on the game's opening drive and scored on a six yard touchdown run. The Blazers then capitalized on a fumbled punt return by the Hornets with a trick play touchdown in which senior running back Eric Zokouri caught a pitch and then threw a pass to senior wide receiver Cliff Carter. A missed extra point by the Blazers kept them down 7-6.

Blair head coach Andrew Fields explained that facing a tough team like Damascus encouraged him to call trick plays. "Physically they're better than us, so you have to get them thinking on defense,” he said. 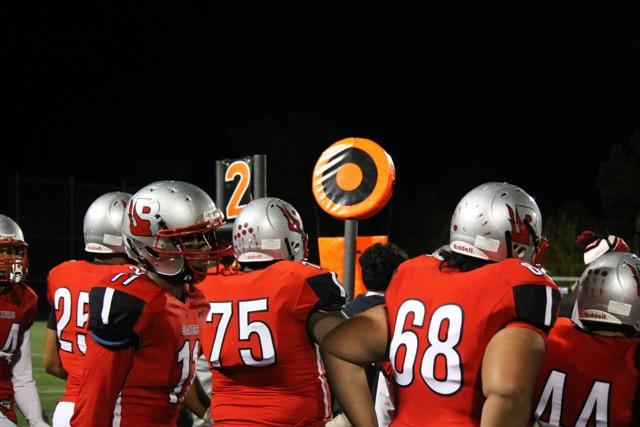 Photo: The Blazers out-gained the Hornets in first downs, 20-12.

The Hornets pounded in another rushing touchdown before the end of the first quarter, and Blair quickly responded with a touchdown pass from senior quarterback Desmond Colby to senior wide receiver Chris Butler. Senior wide receiver Bradley Dayhoff ran in a two-point conversion after the touchdown, leaving the game knotted at 14.

Another Damascus touchdown run gave the Hornets the lead, but the Blazers bounced back yet again. A 15 yard pass from Colby to Dayhoff kept Blair even with the defending champs.

Finally, the Hornets began to perform their weekly routine of pulling away from their opponents. A 56 yard touchdown pass and a four yard touchdown run gave Damascus a 35-21 lead heading into halftime.

After halftime the Blazers and Hornets traded blows on defense rather than offense. Both teams were shut out until Colby threw a touchdown pass to junior wide receiver Enoch Owumi in the waning seconds of the game. Damascus blocked the ensuing extra point to leave the final score at 35-27.

Blair finished the game with 17 penalties while Damascus finished with only four. Senior linebacker Ponce Deleon thought that fixing these mistakes could have given the Blazers the edge. "We need to play smarter,” he said.

Despite the fact the Blazers scored the most points on Damascus out of any team this year, Blair head coach Andrew Fields was disappointed in his team's performance. "We play to win,” he said.

Next matchup: Blair looks to avenge last year's first-round playoff loss against the Quince Orchard Cougars (9-1) on Friday night at 7 on the road.