The Blair Blazers (5-0-1) defeated Kennedy Cavaliers (0-4) 5-0 at home Wednesday. Blair dominated throughout the game, maintaining possession in their opponent's half for almost the entire eighty minutes.

The game opened slowly for both teams. Blair held possession and kept the ball from crossing into their defensive half for the first ten minutes, but their scoring efforts were slowed by numerous offsides calls. The first scoring opportunity for the Blazers came in the 17th minute when junior striker Nina Jefferies broke past Kennedy's offsides trap, but her one on one chance was saved by Kennedy's keeper.

A minute later, a deflected cross fell to the feet of sophomore striker Maddy Merrill who slotted it into the back of the net. After another four minutes, Merrill scored her second goal off of a cross from Jefferies. The first half continued without any other scoring opportunities, except for a low shot by sophomore midfielder Aida Ayuk and an ambitious chip by senior midfielder Claudia Burlinson that soared over the crossbar.

According to Merrill, part of the reason for Blair's success in the first half was the team's composure on the ball. "We did well in being more patient and playing the ball up the sidelines instead of just forcing it down the middle," said Merrill. Blair's scoring opportunities mostly came from crosses from the outside, showcasing the Blazers' strong wing play. 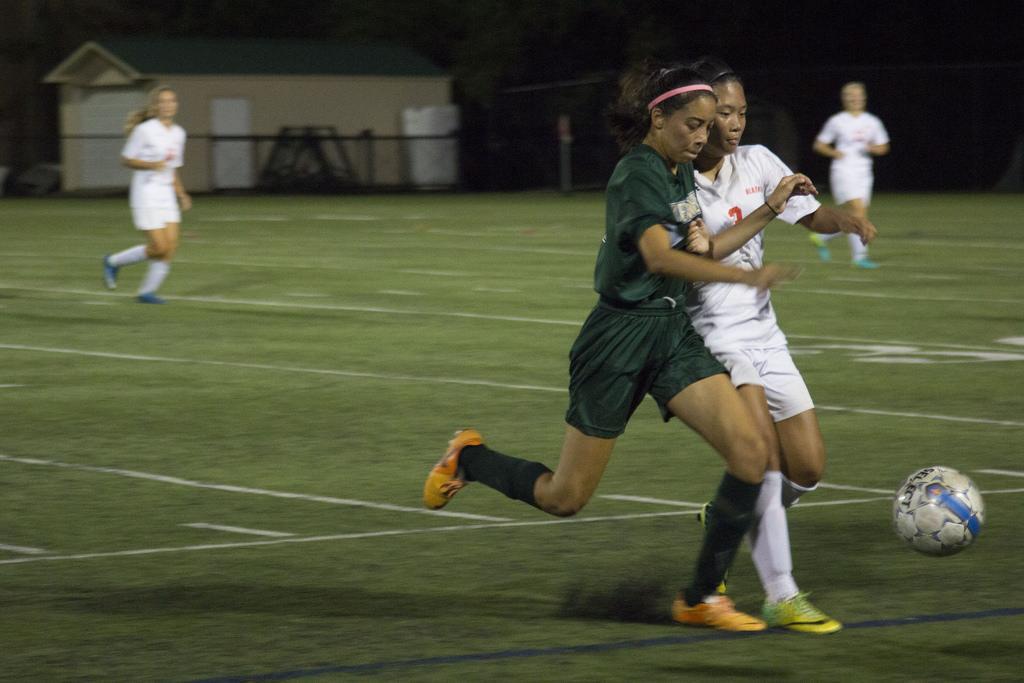 Blair came out on the offensive to start the second half. In the 45th minute, Jefferies missed wide right on a shot from inside the box. Junior midfielder Elaine Suh scored in the 48th minute, but was called offsides. In the 52nd minute, Blair earned their first corner kick of the game. Claudia Burlinson took it from the right side, and it was deflected out for a second corner, with the same result. Jefferies took the third kick, and after bouncing around in the penalty box for a few seconds, it was struck home by Merrill to complete her hat trick.

The Blazers were content to play possession until the 63rd minute, when freshman winger Noa Dorah found an opening down the left sideline, sending her shot just inside the far post to give Blair a four goal lead. Three minutes later, Dorah had a second chance one on one with the keeper, drilling the ball home to the left side. The game ended with a long shot by Merrill, forcing a nice upper nineties save by the Kennedy goalie.

While dominating a 5-0 game is always a positive in athletics, the team still has a few things to work on. According to senior captain Katie Ozeroff, Blair just needs to put the finishing touches on what could be a dynamic group moving forward. "We need to play a little quicker, and we need to clean up the little stuff, touches on the ball, stuff like that," commented Ozeroff.

Dorah added that they could have been more dynamic on the defensive half. "I think that our flank play could improve, and our defensive line could push up a little further," said Dorah. All in all, Blair was clearly dominant in the sixth game of their season, and if they can keep up this level of play in their next home game on Saturday the 24th against Einstein, all signs point to playoffs for the Blazers.