In their first home meet of the season, Blair gymnastics (1,1) executed each event with strength and focus, soundly defeating the Gaithersburg Trojans by a score of 148-83.7. 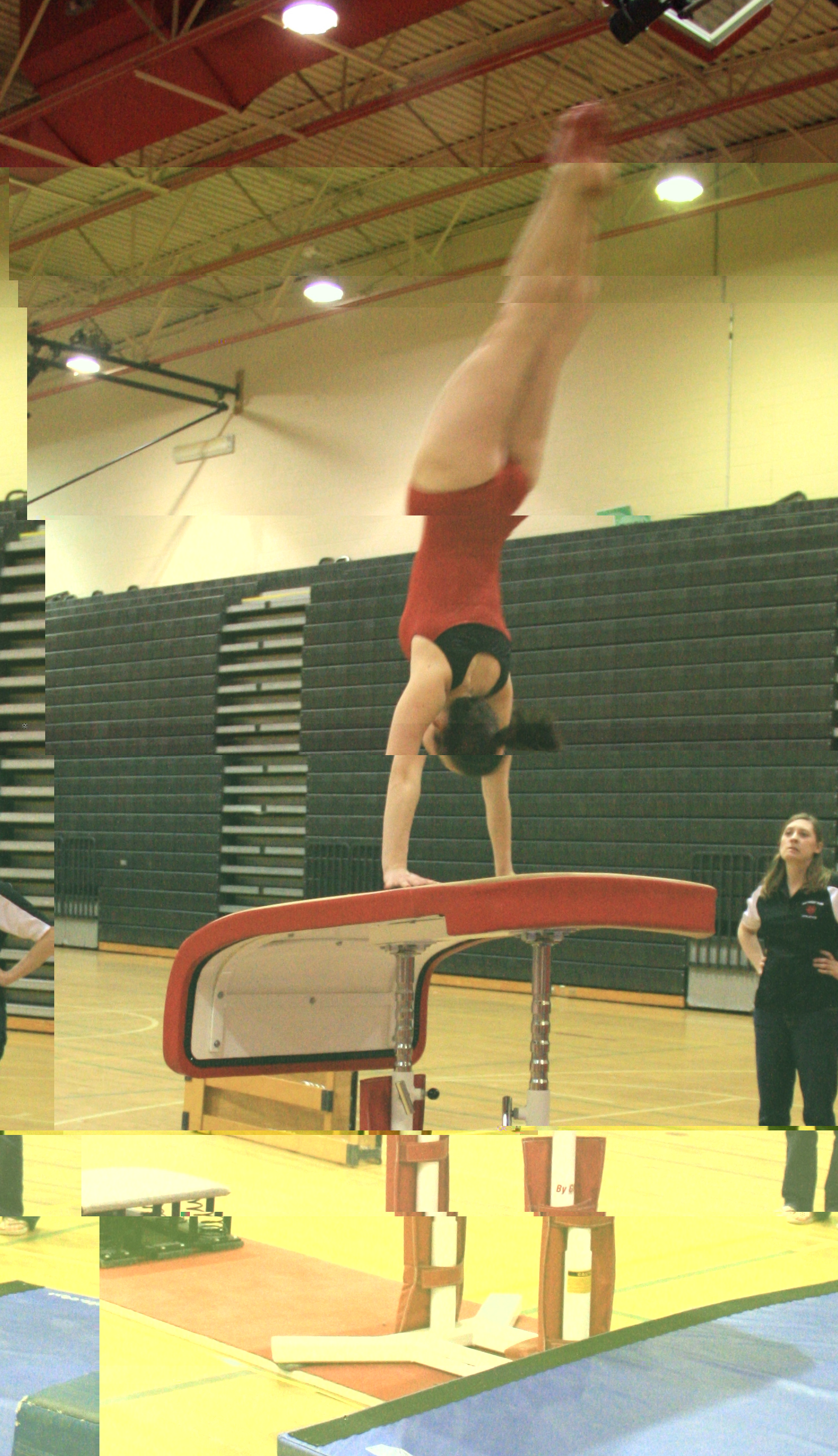 Photo: Junior Katie Pohlman received first place all around in the meet against Gaithersburg.

Photo: Junior Katie Pohlman received first place all around in the meet against Gaithersburg. Photo courtesy of Lorena Kowalewski.

The Lady Blazers won first and second place in all events and took the top three all around scores. Sophomore Kayla McCaw placed third with a score of 30.9, senior co-captain Taylor Smith placed second with 32.9 and junior Katie Pohlman placed first with 34.3.

The Trojans were at an immediate disadvantage by only having four girls compete to make up an overall score that includes the top five all-around scores.

According to Coach Hillary Wynn, the gymnasts progressed from their previous loss against B-CC. "We did well compared to our last meet and we improved our scores," Wynn said.

According to Wynn, the gymnasts performed especially well on the beam. The Lady Blazers won five places in the beam. McCaw placed first with 9.0, Pohlman placed second with 8.8, Smith placed third with 8.7, junior Sterling Mulbry placed fifth with 6.8 and sophomore Rachel Robey placed sixth with 6.5.

The girls approached the beam with a positive attitude, remaining careful but still providing enough to impress the judges. McCaw executed her routine gracefully and performed a variety of moves including cartwheels, back walkovers, leaps and other impressive techniques. Smith and Pohlman also had strong performances punctuated with deep concentration and precise dismounts. "We had solid beam scores, I was impressed," Wynn said. Wynn also acknowledged freshman Lily Gates, Mulbry and Robey for their impressive beam routines.

The vault was another event in which Wynn felt the girls performed well. Pohlman and sophomore Sidney Smith took first and second place with scores of 8.5 and 8.2 respectively. While the Lady Blazers took most of the places with their strong front handsprings, Wynn was particularly proud of Robey's vault even though she did not place. Despite a rough first attempt, Robey performed a straddle-over skillfully, considering that she had only learned the move two weeks ago.

Photo: Senior co-captain Taylor Smith exhibited confidence and poise in all of her events.

Photo: Senior co-captain Taylor Smith exhibited confidence and poise in all of her events. Photo courtesy of Lorena Kowalewski.

All of the girls approached the vault with power and concentration, but faced some difficulty with landings. They exhibited long and strong strides and forceful mounts, only to be brought down by shaky dismounts.

The ladies had graceful bar performances overall but struggled with rocky landings. Pohlman showed agility and used the full potential of the bars with superb flexibility. She ultimately placed second with an 8.4.

The Lady Blazer's floor routines were unique and utilized many complex techniques. The girls moved with elegance and extreme flexibility, and always provided originality and flair. A memorable routine came from Taylor Smith who gave a powerful performance propelled by a driving song. All of the routines were filled with impressive aerial walkovers, back flips, back handsprings and front walkovers, and the girls stuck almost every landing.

The girls came into the meet without two strong veteran gymnasts – senior Sophie Seidell and senior co-captain Claire Hoffman. Despite their absence, the Lady Blazers still managed to give strong performances. Wynn found it beneficial for the girls to see how they competed without Seidell and Hoffman. "It's good to see that they are not dependent on the other girls," Wynn said. "It's a good confidence booster."

With an impressive overall score and first and second place in all events, the Blair gymnasts ranged from graceful and elegant routines to strong and skillful performances. The girls impressed the judges and the audience, but Wynn felt that there were still some areas that they could work on, mainly in composition by avoiding flying arms and legs. The girls improved from their previous meet and worked diligently during every practice to enhance their skill. "They work so hard and that is all I can ask for," Wynn said.

The girls' gymnastics team will hold their next home meet on Tuesday, April 12 against Walter Johnson at 5 p.m.