On Thursday, April 11, the Student Government Association (SGA) hosted a town hall with the two Student Member of the Board (SMOB) candidates, Zoe Tishaev and Nate Tinbite, in the auditorium. Held during both 5th and 6th period lunch, the event allowed Blazers to ask the candidates questions about their campaigns and policies.

SGA parliamentarian Swechchha Shrestha kicked off the town hall by asking the candidates to introduce their policy platforms.

Tishaev is a junior at Clarksburg High School who became involved in student government late in her freshman year. She is now a liaison for the county SGA, the SMOB Advisory Council and the Montgomery County Council of Parent-Teacher Associations, among other student activist groups. She prioritizes need-based distribution of resources to schools and addressing the achievement gap. 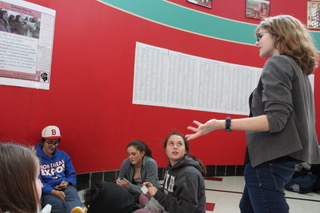 Tinbite, a junior at John F. Kennedy High School, is the president of the county SGA and a founding member of MoCo for Change. Tinbite's policies focus on closing the opportunity gap, breaking socioeconomic barriers and amplifying student voices. If elected, Tinbite would be the first SMOB from a downcounty consortium (DCC) school since Blair alumnus Sebastian Johnson in the 2005-2006 school year.

After Shrestha opened up questions to Blazers, senior Kayla Malone asked the candidates how they, if elected, would help the DCC in particular. Tinbite vowed to use his perspective as a Silver Spring resident to fight for DCC students and bridge the opportunity gap. "We've had students at the Board table who are not from this school and not from this part of the county, and we are not heard. I'll make sure that it's my number one priority when I'm at the Board table to fight for you guys and this community," he said. 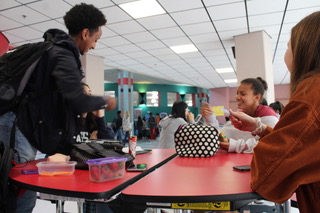 Tishaev highlighted the importance of communicating with all students and vouched for expanding the Achieving College Excellence and Success (ACES) program and the Minority Scholars Program. She also prioritized expanding the role of SMOB in order to advocate for issues critical to students. "As the only student-elected official, the SMOB has a responsibility beyond the Board of Education to participate in all parts of the county," she said.

The Blazers asked other questions regarding the countywide school boundary analysis, the ACES program and what makes teachers effective.

After answering questions, Tishaev and Tinbite moved to the SAC, where they met with more Blazers and announced their policy agendas.