A junior drops hardened clay from the second floor, hitting a teacher's head

On Monday, Nov. 27 during lunch, junior Blake threw a clay rock over the banister above Blair Boulevard, which fell on the head of teacher Elizabeth, who happened to be walking past the financial office on the first floor. The teacher ended up with a bleeding gash, a small lump on her head and headaches. Using Blair's security cameras, school administrators reviewed the incident in detail for evidence. 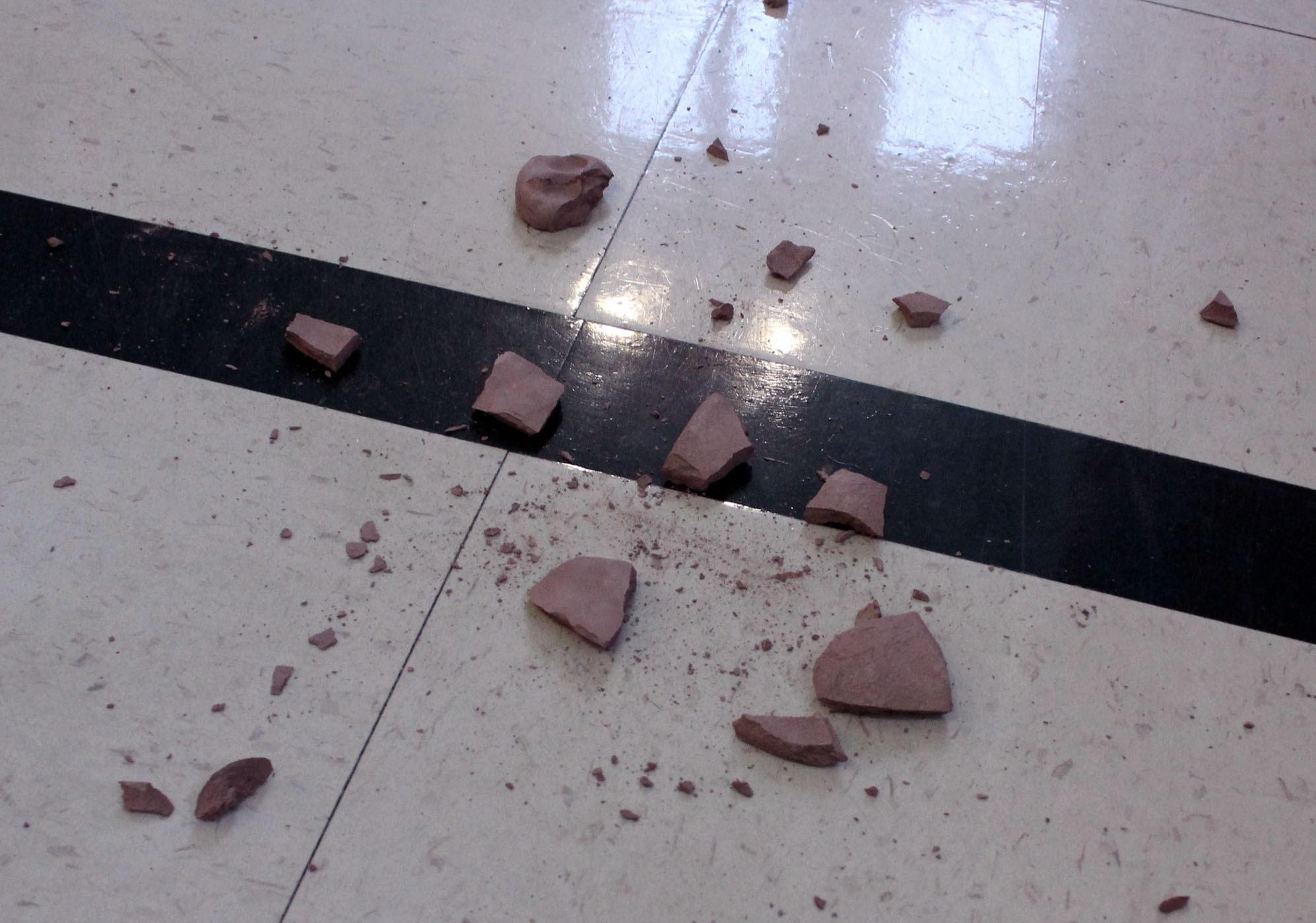 Photo: On Monday, Nov. 27, a junior dropped hardened clay from the second floor, accidentally hitting a teacher who was walking past the financial office.

Photo: On Monday, Nov. 27, a junior dropped hardened clay from the second floor, accidentally hitting a teacher who was walking past the financial office.

As seen on camera, Blake walked down the 220's hallway past the lockers, and threw the rock over the banister. When Elizabeth felt the rock hit her head, she went back into the financial office for assistance. Financial specialist Donna Franklin had her sit down and called for Blair's full-time registered nurse, who examined and applied ice to the gash. Blair administrators then reviewed security camera footage to determine the instigator. "We took a statement from her [the teacher] to figure out what was happening. We looked on the cameras - she's just walking along right in front of the financial window when something hits her head; she grabs her head, and then she kind of leans against the wall and walks back...into the office," Principal Renay Johnson said.The injury was unintentional; cameras showed that Blake was too far away from the railing to see anyone on the first floor. "He meant to throw it over the banister, but he just didn't think it would hit anyone. We have 3,100 students and 310 staff members; chances are pretty high that he'll hit someone," Johnson said. Upon hearing about the incident, Blake's family apologized to Elizabeth. "He and his family were remorseful. I don't think it was his intention to injure anyone," Johnson said.

Nevertheless, Blake received consequences for his actions. School administrators suspended Blake on the basis of his causing a staff injury. "I can suspend for 10 days and recommend expulsion, and the central office would review the case and determine if the offense is expellable and if the student should be expelled," Johnson explained. The day following the incident, Johnson made a school-wide announcement about the incident to ensure that students do not throw things from the second or third floor in the future.

Reactions to the case culminated in disappointment from all sides - staff and students. "The student population was concerned...and pretty disappointed that the teacher got injured, and also that somebody did that at Blair," Johnson commented. Johnson noted that students need to recognize the severity of their actions. "Even if you had no intention of injuring anyone, you had an intention of dirtying the building. Adults who have other things to do have to clean it up," Johnson remarked.

Johnson explained that these kinds of incidents come with long-term consequences, including a permanently tarnished high school record. "Colleges will ask you on their application [whether] you've ever been suspended, and if you lie, they request for your records, and if you say yes, you have to put the reason why. I mean...why would they take you...when they can take 5,000 other kids?" Johnson said.

Where only first names appear, names have been changed to protect the identities of the sources. The teacher has recovered and is back in school.