Blair stuns Northwood in the Battle of the Boulevard

The Blair varsity football team (1-4) defeated the Northwood Gladiators (1-5) by a score of 13-8 on Saturday. The Blazers had a solid offensive and defensive showing as they registered their first win in nearly two years. They capitalized on almost every opportunity they had and shut down the Gladiators' offense. 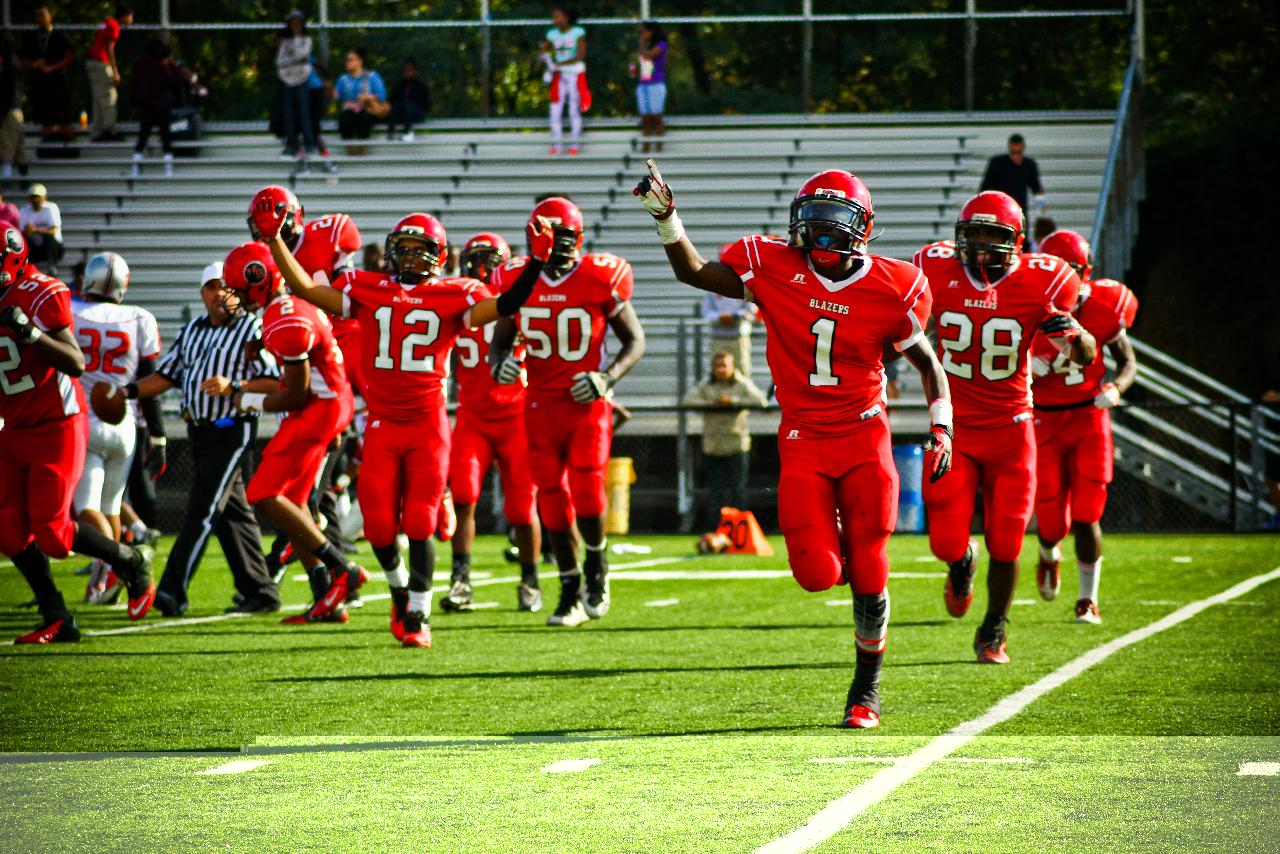 Battle of the Boulevard

Photo: The Blazers celebrated as they took down the Gladiators in the Battle of the Boulevard.

Photo: The Blazers celebrated as they took down the Gladiators in the Battle of the Boulevard. Photo courtesy of Zeke Wapner.

Blair gained momentum early as on the opening kickoff Blair's Claude Richardson recovered a Northwood fumble giving Blair the ball at the Northwood 18-yard line. Blair capitalized on their opponent's mistake when halfback Darryl Blue ran for the first touchdown of the game, handing the Blazers a 7-0 lead after a successful extra point by senior Joshua Blockstein.

On the next possession, however, Northwood capped off a long drive when quarterback Charles Hennessey completed a touchdown pass to Jabari Robinson. Along with a two-point conversion, Northwood took the lead 8-7 with 2:40 left in the first quarter. After neither team could get anything going in the second quarter, the score remained 8-7 heading into the half. 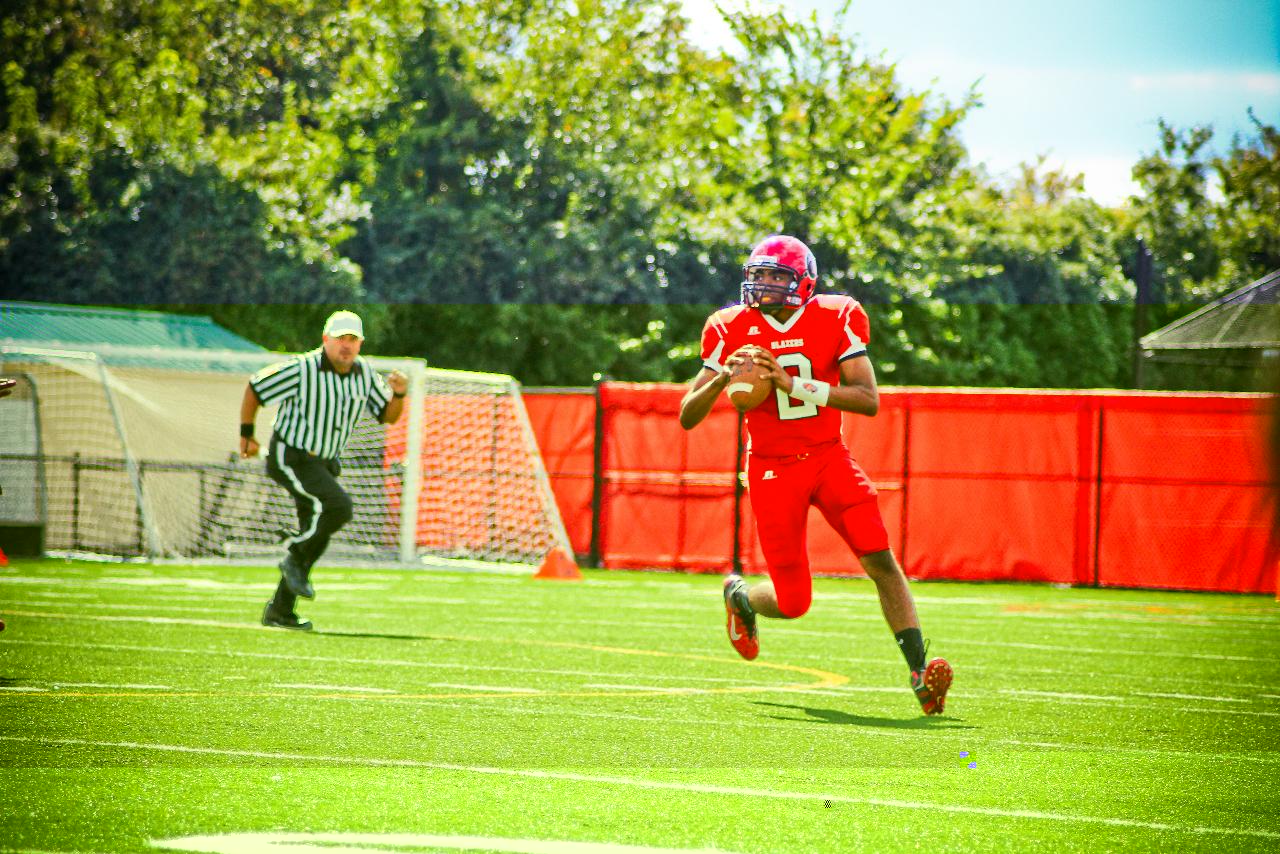 Photo: Junior Raymond Burtnick threw for his first touchdown of the season in the 13-8 win.

Photo: Junior Raymond Burtnick threw for his first touchdown of the season in the 13-8 win. Photo courtesy of Zeke Wapner.

Blair came out strong in the third quarter with an excellent kickoff return to the Northwood 43 yard line by Khalid Rivers. Later in the same drive, the Blazers were able to take advantage of their great field position when on a critical fourth down, junior quarterback Raymond Burtnick threw his first passing touchdown of the season to senior Sorel Gossin. "We had very few mistakes on offense, everyone did their job," Burtnick said. Burtnick's touchdown pass gave the Blazers' their first second half lead of the season. After a failed two-point conversion attempt the score stood 13-8.

The game was not over yet, however, as Northwood finished the third quarter with a strong drive giving the Gladiators the ball at the Blair 3-yard line to start the fourth. As the officials blew their whistles to begin the final quarter, Northwood was called for a costly false start penalty, which set them back five yards. With close to 10 minutes left in the game and recognizing the game was on the line, the Blair defense stopped the Gladiator offense at the goal line on fourth down. Lineman Walter Blanco saw the goal line stand as the real turning point in the game. "We had to rotate the D-line, missing Mario, and we had to step it up but we did," Blanco said.

The Blair defense continued to be a brick wall as they shut out Northwood in the final quarter. Midway through the fourth quarter, the Blair defense forced a turnover when Northwood's Jordahn Brown fumbled a snap and later, with 2:00 left in the game, they stopped Northwood's final drive with an interception by senior Alhaji Timbo, to seal the game.

"It feels awesome to win again. I couldn't have expected a better result," Richardson said, "I'm really proud of the team."

Head coach Jeff Seals believed this was the best game the team has played all year. "We had no mistakes on offense or defense. We played a complete game. It's hard to pick out one player because everyone played well," Seals said. "We feel great about this game but we need to focus on Springbrook. Tomorrow is a whole new day."

Varsity football will play their homecoming game on Oct. 19 at 7 p.m. against Blake.