Blair's swim and dive team defeated the Einstein Titans and Wheaton Knights in the first meet of the season. The team considered this meet a scrimmage, since Blair's Division I team will not swim against Einstein and Wheaton's Division IV teams during the regular season. In addition, the results will not count for the teams' overall record and the meet excluded certain events, including the 500 Freestyle races. 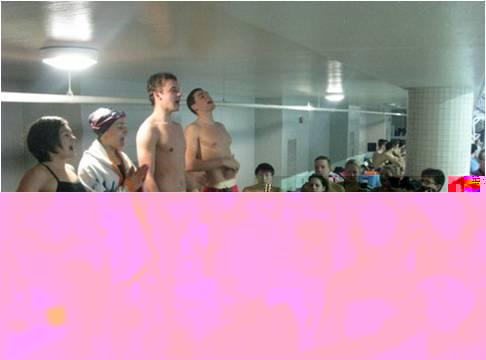 Photo: Captains get the swim and dive team pumped up before a scrimmage against Einstein and Wheaton.

Photo: Captains get the swim and dive team pumped up before a scrimmage against Einstein and Wheaton.

According to co-coach James Demma, many of the incoming freshmen were instrumental to the team's success and performed well during today's meet, including Rona Yu and Emma Moore. "Before the meet, we suspected that the freshmen were good, but we were really very impressed today," Demma said. Senior co-captain Jack Foster was another key swimmer in the meet, breaking Blair's 200 Freestyle record, which last year's graduate Niklas Hammond previously held.

The new coach, fine arts teacher Kelly Crowder, wanted to emphasize that one of the team's goals for the season is to concentrate on treating every meet the same, regardless of the opponent. "Our focus is going to be to swim every race like a championship game," Crowder said.

Senior co-captain Emily Lathrop thought that the scrimmage was especially helpful because of the flexibility it allowed in terms of event assignments. "We put a lot of people in events that they don't normally swim because [this meet] didn't count," Lathrop said. "People will be swimming more of their best events in upcoming meets."

According to Foster, the meet allowed the team to develop enthusiasm for the upcoming season. "I think the scrimmage went really well," Foster said. "We had a lot of people swimming fast and getting excited."

Despite a triumphant first meet, Foster is less sure of how well the team will do at their meet against Walter Johnson next week. "Next meet is going to be weird because we'll be missing a lot of swimmers, so we don't really know what to expect," Foster said.

Coaches Demma and Crowder are also excited about the team's prospects for this season. "Blair has a great team and it's going to be a competitive team in the county and in the state this year," Demma said.

The Blair swim and dive team will compete in their next meet on Saturday, Dec. 8 at 9:15 a.m. at the Germantown Indoor Swim Center.