With the start of the 2017-2018 school year, multiple teachers have begun to ask for students' Preferred Gender Pronouns (PGP) on student information sheets.

During the annual staff planning period before the school year, senior Jamie Griffith delivered a presentation to the Instructional Leadership Team (ILT) informing them of ways to protect transgender students at Blair. "I did a presentation for the Blair ILT team about trans-inclusion within the classroom, with a particular focus on ensuring that classroom environments are welcoming and safe for transgender students," Griffith said. 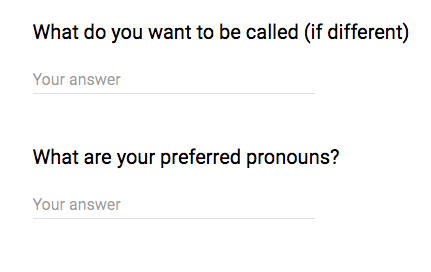 Photo: David Stein incorporated a question about PGP in his beginning-of-the-year survey.

According to Griffith, when teachers pose the question to everyone in the class, it creates an understanding and welcoming environment for transgender students. "If the teacher is the one that starts it you know that there's some base understanding. There's an underlying desire to include trans students in the classroom," Griffith said.

Math teacher David Stein was present at the ILT meeting and decided to change the way he asked about PGP. At the beginning of this year he posed a question about PGP on his online student information questionnaire. "I've always asked kids when I thought there was an issue or when they thought there was an issue. What Jamie got me to see was that's really not the right way to go about doing it," he said.

Computer science teacher Samir Paul has also asked his students about their gender identity. "At the beginning of the year I have all my students fill out a survey that gives me a bunch of information. One of the things I ask for is their gender," he said. This year, Paul also added an optional question about PGP.

English teacher Sandra Jacobs used a different technique to ask her students their PGP. Her main goal was to keep it simple and private for each student. "I gave them a yellow sticky, and I asked them to write their name, so it would be more or less anonymous, and the pronoun they would like to be referred to as," she explained.

In addition to receiving an email from the principal's secretary encouraging teachers to ask about PGP, Jacobs was moved to ask due to an experience she had last year. "I had a student who wrote a story in class where there was no subject pronoun agreement and I corrected it. He told me he wanted it to be gender neutral and seemed put off that I corrected it," Jacobs said.

Social studies teacher Peter Cirincione had a similar experience, which prompted him to ask his students their gender identity. "I had a student who I referred to by a pronoun that they didn't want me to use. That made me feel acutely guilty for making the student have to publicly define themselves," he said. Like Paul and Stein, Cirincione also asks about gender identity on his online student survey.

Freshman Kaitlyn Nguyen participated in an activity to share her PGP in Mary-Lou Thornton's US History class. "She had everyone write their name and be specific on how they wanted other people to call them," Nguyen said.

Nguyen found the activity to be simple, effective and unobtrusive. "She was very straightforward about it and everyone was comfortable. We didn't have to share it with anyone - we just wrote it on a card," she said.

Senior Jace Eaton has not had any of his teachers ask him specifically for his PGP but says that teachers can help set an example for the class. "If teachers use the right pronouns then every student will follow. It normalizes the practice of asking and being asked,” he said.

Vickie Adamson, head of the English department, plans to encourage the teachers in her department to incorporate PGP into beginning-of-the-year information gathering of their students. "I'll start by asking teachers their preferred pronoun," she said.

Montgomery County Public Schools (MCPS) has a policy in place to protect trans students. Griffith aimed to bring the policy to a level of understanding at which teachers could effectively support their transgender students. "It's something where currently there are a lot of good policies in place. I am a trans student and someone who is interested in education. Being able to see an issue from both sides and work it out that way is what led me to do the presentation," he said.

Griffith plans to extend the reach of his presentation beyond Blair. He has been asked to present at several other MCPS schools. "I've been giving a couple more presentations based off of that one. I'm trying to bring the show on the road," he said.