The Blazers' strong performance leads to a 3-0 win

The Blair girls' varsity volleyball team (5-4) played with a formidable offense, defeating the Wheaton Knights (4-5) 3-0 in the game on Monday. Coupled with a solid defense, the team played an exciting game amid non-stop cheers from the stands.

The first set began slowly, with both teams staying even throughout the first few points of the game. The Blazers, with solid blocks and hits down the middle, gradually picked up the momentum. After the Blazers scored four or five points in a row, Wheaton's coach, trying to hinder their momentum, called two total time-outs in the first set. After an ace by captain and outside hitter senior Samantha Rodriguez, Blair won the set 25-15.

The Blazers presented a powerful offensive in the second set, with numerous kills and aces that allowed them to pull an early lead. On account of miscoordination between the Blazers and points lost at the net, towards the end of the set, Wheaton shortened the lead and gained back a few points. This set was a lot closer than the first, but ultimately, the Blazers still won the set 25-20.

The Blazers maintained their unforgiving offense in the third set, while pressure mounted on Wheaton to bring back a set. With a kill by middle blocker freshman Allison Lin, the Blazers closed out the set 25-21, winning the game.

Sophomore Anne Wang, who was recording hits on the sidelines for the game, remarked on the effect that their practices had on the team's gameplay that evening. "​​I think we played at our level. Our hits were especially good because we practiced a lot during our practices with the middle ones and threes, [so] we did really well with that today," Wang said. 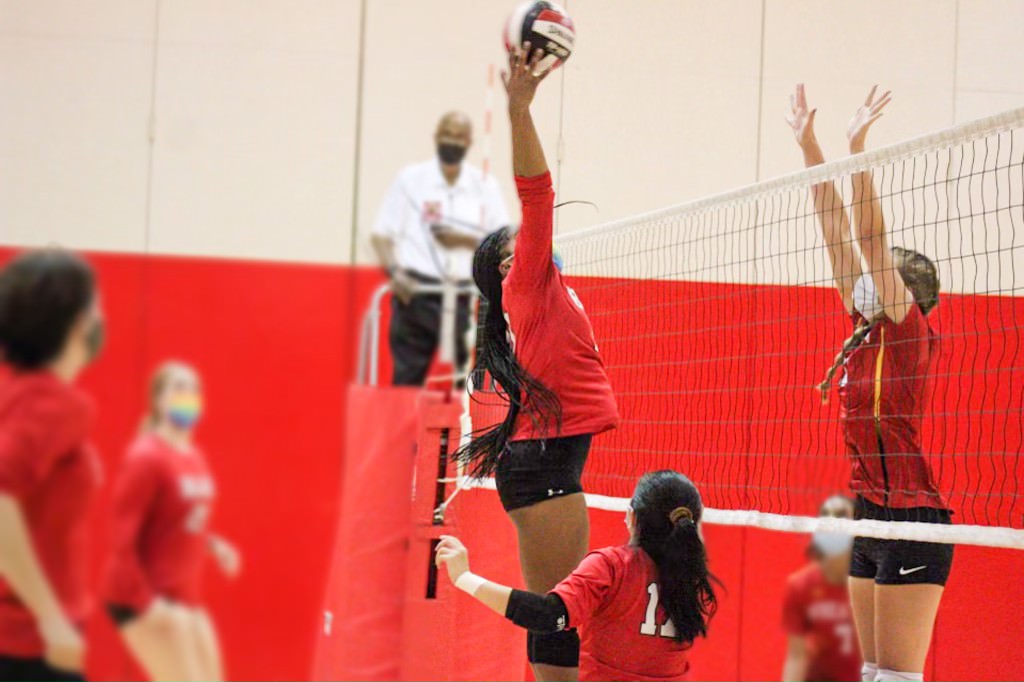 Photo: Outside junior Brooklynn Prince blocks the ball at the net.

Photo: Outside junior Brooklynn Prince blocks the ball at the net. Photo courtesy of Jonas Laufer.

Outside junior Brooklynn Prince was really proud of her blocks and the plays that the team pulled off, all of which are the account of the hours they put into practice. "We just need to work harder every single day because that's all we really need: more practice, work hard, and staying together as a team. We have a good dynamic, [if] every day we just put in that workload, the results will be good," Prince said.

The Blazers will play their next home game on Monday, Oct. 18 against Damascus at 6:30 p.m.