After a hard fought game, the Blazers were ultimately defeated by the Kennedy Cavaliers in a 1-3 game 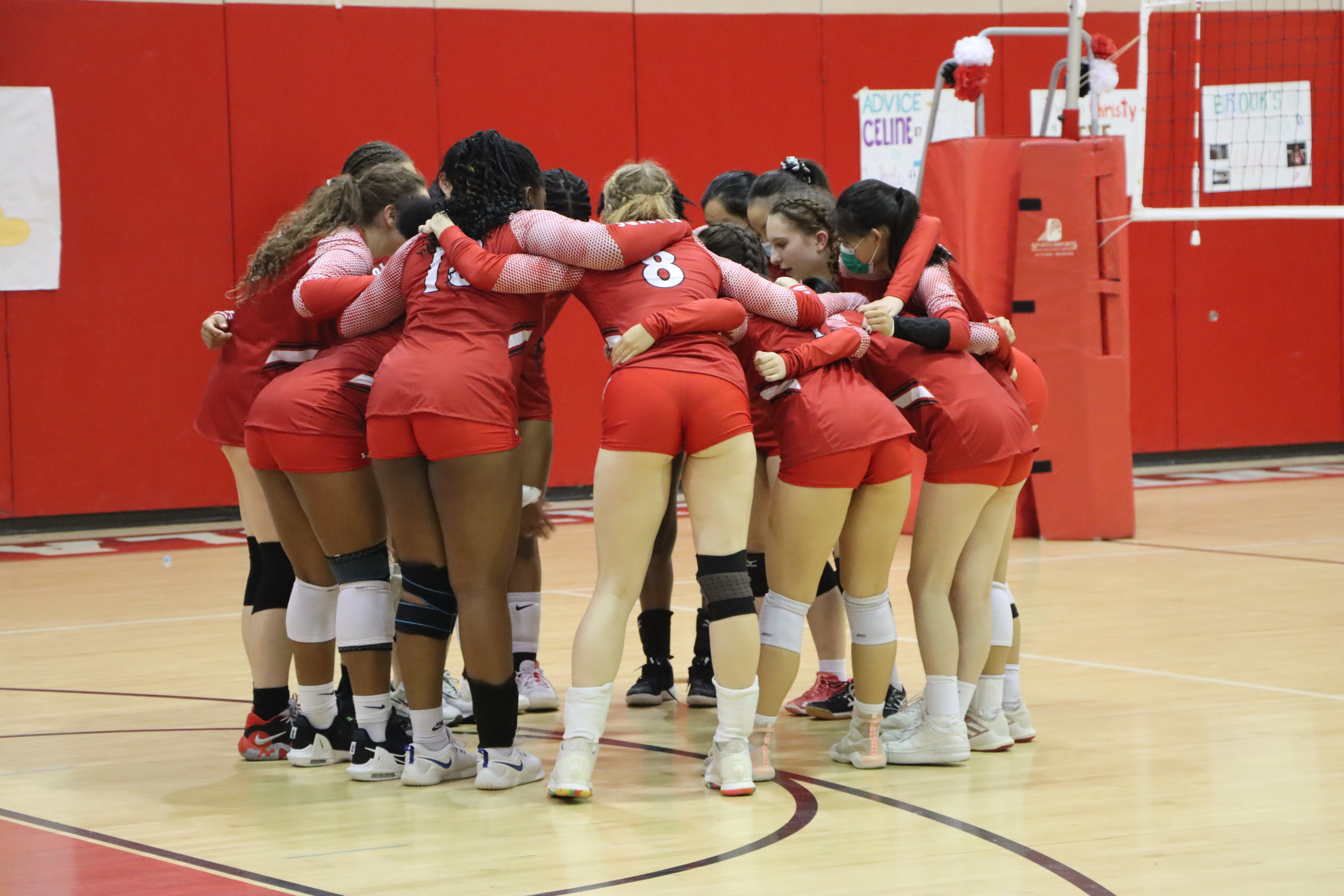 Photo: The Blazers huddle together and chant the Blazer cheer to hype themselves up before the game.

Photo: The Blazers huddle together and chant the Blazer cheer to hype themselves up before the game. Photo courtesy of Katie Phung.

On Oct. 25, the stakes were high between the Blair Blazers (3-10) and the Kennedy Cavaliers (8-5) during the Blair senior night game. The bleachers were filled with families, friends, and other Blazer athletes to support the team. Even through a hard-fought game, the Blazers lost 1-3 to the Cavaliers.

Before the game, underclassmen from varsity and JV were preparing and decorating the gym in order to celebrate the seniors. Posters, streamers, and balloons made the environment more exciting in comparison to your average home game. After varsity performed their warm-ups, senior players, followed by friends and family, were all individually announced and walked across the gym as they were celebrated and applauded for their dedication to the volleyball program.

The start of the first set was a bit shaky for the Blazers, with a few serve receive errors from Blair’s defense against the hard serves coming from Kennedy. The Blazers were able to pick themselves shortly afterwards with kills from Senior Brooklynn Prince and ace serves from Senior Avery Fan. The crowd kept a very loud and positive response to these points, following with ace cheers and a special chant for Prince that goes: “BK! You know!”

Even with the positive energy immersing throughout the gym, the Blazers continued to have difficulties with serve receive and overall communication when it came to calling the ball. Due to this, the Blazers fell far behind Kennedy in the first set, losing 9-25. 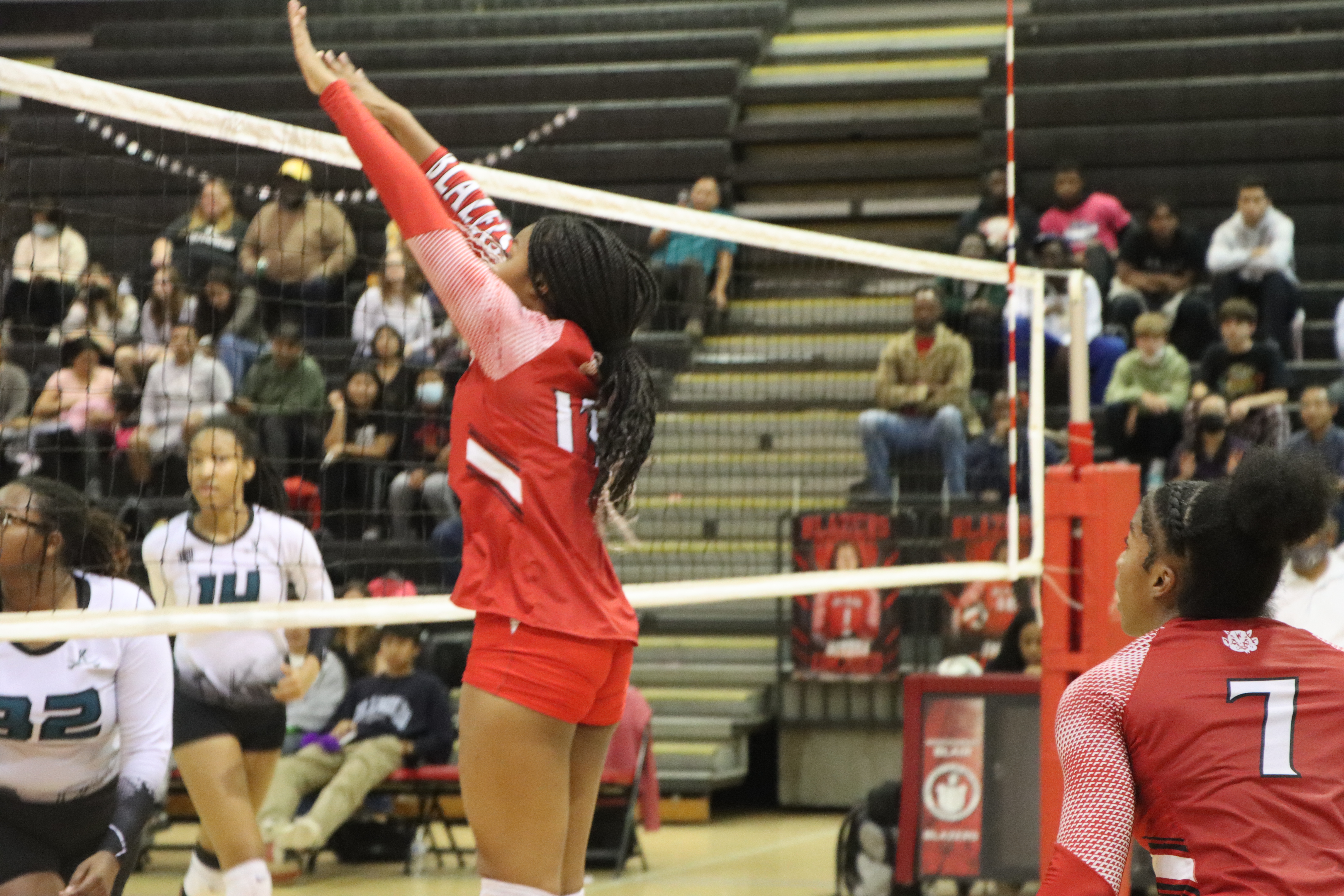 Photo: Junior Chrissie Oppong goes up for a block in attempt to stop Kennedy’s freeball.

Photo: Junior Chrissie Oppong goes up for a block in attempt to stop Kennedy’s freeball. Photo courtesy of Katie Phung.

In the second set, Blair takes advantage and gains more confidence with their performance. Senior Brooklynn Prince continued to swing hard against Kennedy’s defense, which they had difficulty picking up as a result. Shortly after, Kennedy’s defense continued to struggle with Senior Emily Tankeh’s hits, as they were unable to properly close their blocks.

The senior’s offense was able to create a strong tie with Kennedy, the scores were neck to neck but ultimately ended in a close tie with Blair losing 23-25 in the second set.

The Blazers kept the momentum of the previous set into the third set, constant kills and aces were delivered to Kennedy’s defense in which they responded with stronger offense. But Senior Rosie Orzulak was able to successfully slow the momentum of Kennedy’s defense with surprise setter dumps. Prince was able to get Blair even with Kennedy, standing at 17-17 after powerful hits.

The Blazers were able to keep up with Kennedy’s offensive, which gave them a 19-16 lead that eventually led to a timeout called by the Kennedy head coach in an attempt to slow the momentum of the lead. Tankeh, however, prevailed as she used tips and ace serves to have the Kennedy’s back row struggle greatly. The third set eventually ended with Prince getting a touch-out hit with Kennedy’s block, winning them the set at 25-20. 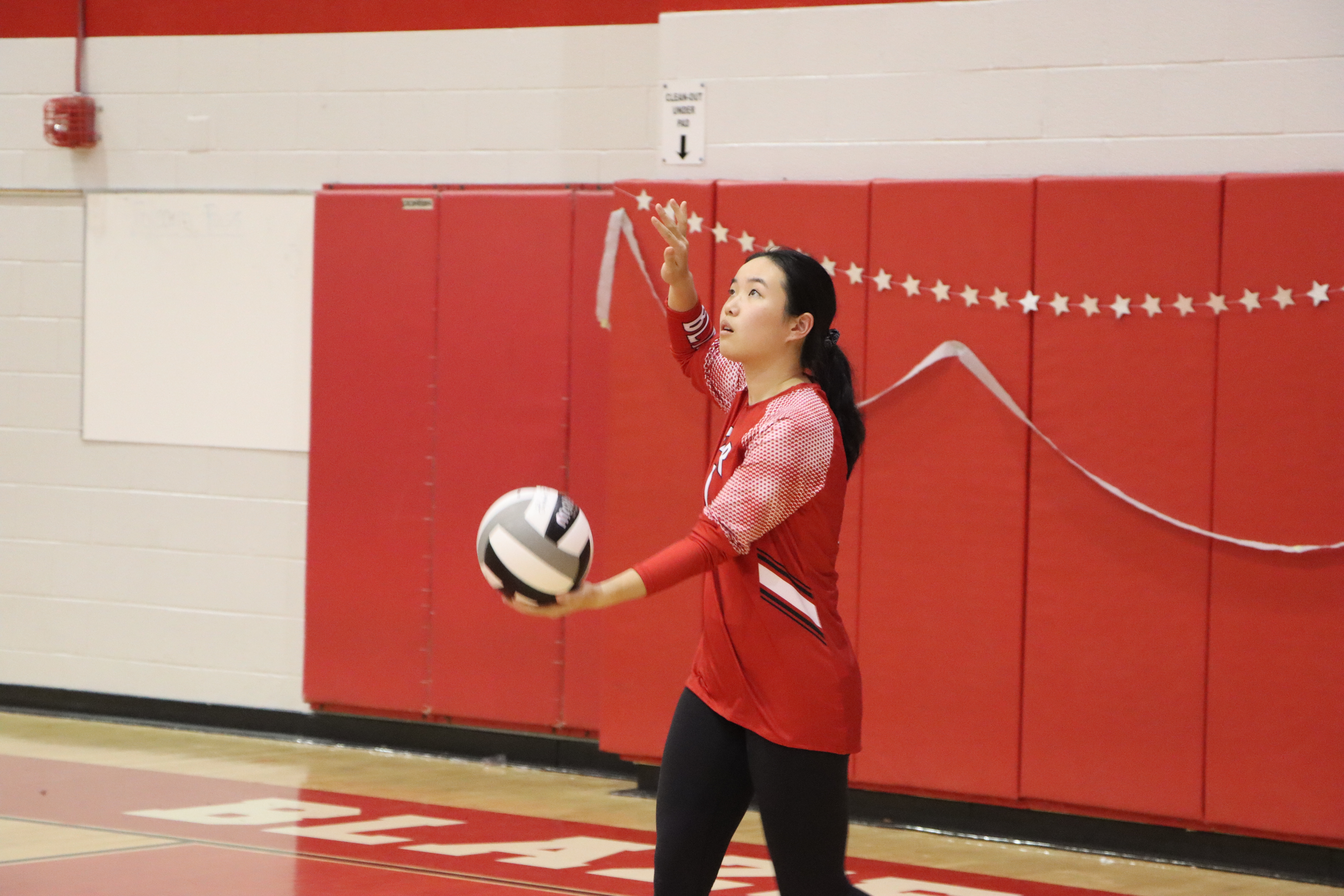 Photo: Senior Celine Wu prepares to throw the ball in front of her to serve over the net.

Photo: Senior Celine Wu prepares to throw the ball in front of her to serve over the net. Photo courtesy of Katie Phung.

During the fourth set, the Blazers were unable to get solid back row attacks after multiple attempts. This allowed Kennedy to take advantage of these points and get a solid lead at 16-22, causing Blair to call a timeout. The Blazers unfortunately fell short to the Cavaliers at 18-25.

Senior Emily Tankeh really felt the support from the audience and the team while they fought hard against Kennedy. “[Blair] has a strong community here and a strong presence…it’s just nice to see how everyone can come together and really support each other…I love Blair.”


Katie Phung. Hi, I'm Katie! (she/her) I'm on the writing and photo staff. I like listening to Lil Peep, Joji, and EKKSTACY. I love spending time with my dog, Pocky, and playing games on my Nintendo Switch. More »