The Blair Blazers (4-0-0) beat the High Point Eagles (0-1-0) from Prince George's County by a maximum possible score of 84-0 during their first home meet. Despite an unexpected number of forfeits by High Point due their small team, Blair came out with a determined mindset as they would for any meet. "I told the guys to just wrestle like it was a really important match anyway and they wrestled tough, they didn't really make any mistakes and obviously the score showed it," head coach Tim Grover said. 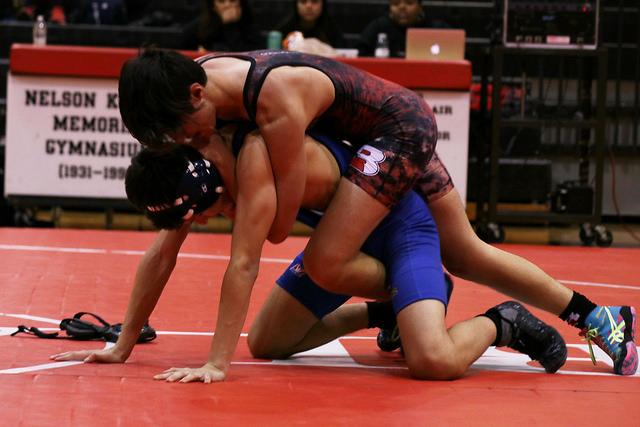 The match started at the 132 lb weight class, in which sophomore Sho Takeshita came out strong for Blair. Starting out aggressively, he took an early shot and quickly took down his opponent. He then had two near falls, scoring 5 more points by the end of the first period. Takeshita remained strong in the second period and earned another takedown 30 seconds into the period, pinning his opponent with a cement mixer at 2:49 to give Blair a 6-0 lead.

Senior Bryan Huynh (138) wrestled in the second match, and showed dominance with a forceful takedown only 25 seconds into the contest, but lost his control after an escape from the High Point wrestler. However, Huynh quickly found his groove and scored another 5 points with a take down and near pin at the end of the first period. In the second period, Huynh racked up more points with a reversal, two more takedowns and a near fall, ending the period with a lead of 15-5. Huynh's persistence paid off in the third period, as he squeezed in one more takedown before a quick pin at 4:14, bringing the team score to 12-0.

High Point forfeited the match at 145 to Noah Chopra-Khan, raising the Blair lead to 18-0.

Senior captain Ryan Holland (152) wasted no time before showing offensive pressure. He scored a quick take down, and battled his opponent with a series of arm bars but could not turn him to his back in the first. In the second period, Holland quickly reversed from his bottom position with a granby roll and stayed on the offensive. After much persistence and a near fall, Holland was able to get both of his opponent's shoulders on the ground with an arm bar, scoring a pin at 3:33.

Six more points were scored for Blair in the second forfeited match at 160 to Ernest Son. The night progressed quickly considering the number of forfeits, but Blazers stayed ready to wrestle. "I just had all the guys be ready at all times because when there is forfeits the matches go super fast," Grover explained.

Senior Pelumi Akinpelu (170) also came out strong with a quick takedown in the first period. At 41 seconds he pinned his opponent to earn 6 more points for Blair. The next three matches were forfeited to senior Leo West, sophomore Joel Paulino and senior Rudy Ngougni for 24 more points to Blair.

The last match was initially going to be with Ngougni, but a last minute weight class bump up from 220 to heavyweight by High Point meant that Mervin Mancia was wrestling instead. "Rudy Ngougni is our 220 pounder, he's a pretty tough kid. He was a match away from being all-state last year and I think they have a first year guy out there so rather than having him go against him, they wanted to bump him up," Grover commented.

Despite feeling a little underprepared after thinking he wasn't going to wrestle, Mancia pinned his opponent in the fastest time of the night, taking a mere 24 seconds to win his match. "I wasn't expecting to wrestle actually, I was expecting a forfeit so that's why I was a little cold out there but I'm trying to set an example for the county. I was a little shook but you just gotta do what you gotta do," Mancia explained.

The remaining matches were forfeited to freshman Brian McCaw, junior Muhammad Baig, senior Ryan Handel and junior Biruk Tona, to end the night with Blair receiving a perfect score of 84-0, by earning all six points in every match.

Holland was proud of the team's excellent performance in the few matches they wrestled. "We knew going in that there were going to be a lot of forfeits and we were probably going to win but getting a pin in every one of our contested matches was definitely a stupendous performance," he said.

The team is excited for more tough competition in addition to making it to championships. "As a team I think we can go undefeated. We have a few tough matchups soon: we have QO on Saturday and that's going to be a hard one. I think we can make regional and hopefully make it into the mix for state titles," Holland said.

The Blazers hope to continue their winning ways in their next match against Quince Orchard and Wootton at Blair on Saturday, Dec. 16 at 12:30.