The team triumphs in a season full of fierce competition.

In a culminating season of hard-hitting practices and intense competition, Blair's "It's Academic" Team showcased its impressive trivia and team collaboration skills. The team finished strong and managed to secure 10 wins, most notably at the Intercity Super Bowl Championship for the second year in a row. In the finals, the Blazers defeated Centennial High School (CHS) and Osborn High School. Regarding their most recent success this past weekend, the team traveled to Atlanta, Ga. and placed 12th in the High School National Championship Tournament (HSNCT).

Featuring 350 of the top high schools from across the United States, HSNCT presented Blair with familiar opponents in attendance, including RMHS, CHS, and Thomas Jefferson High School. According to coach and teacher sponsor Erik Lodal, this nationwide competition was very difficult and challenging content-wise. "Blair beat the team that ended up winning the whole thing but lost to them in the playoffs. In the grand scheme of things, they still did exceptionally well," Lodal said. Blair's A team finished 9-1 in the preliminary rounds; the B team went 6-4 and qualified for playoffs, while the C team came up short 5-5 and did not qualify for the next round. 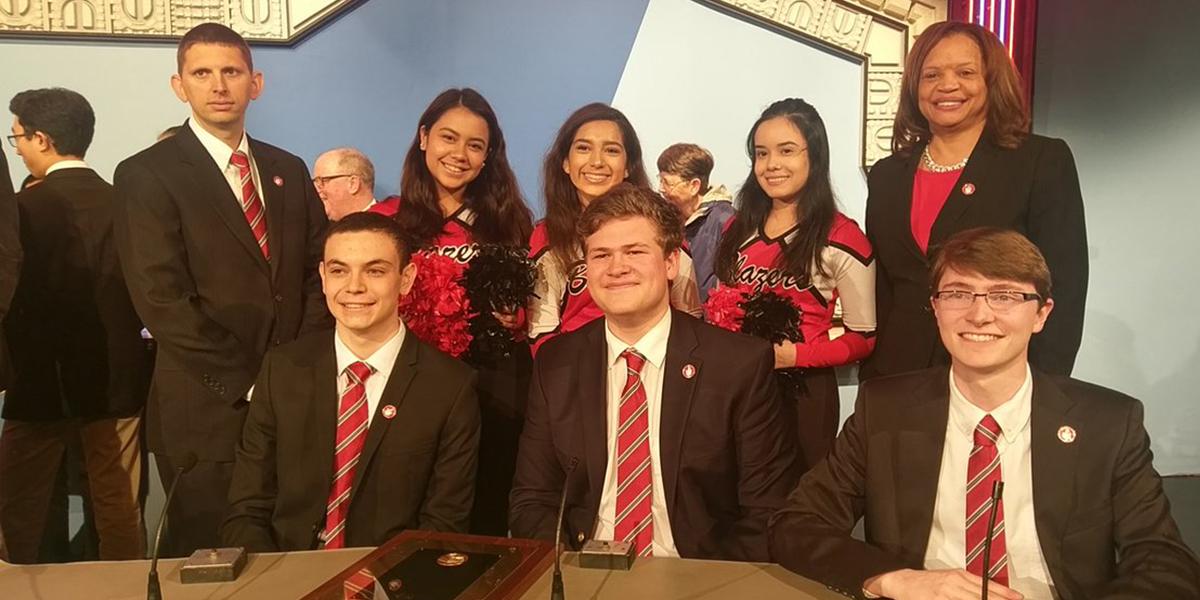 Photo: Caption: Blair's "It's Academic" team wins the Intercity Championship on the televised tournament for the second year in a row.

Photo: Caption: Blair's "It's Academic" team wins the Intercity Championship on the televised tournament for the second year in a row.  Photo courtesy of Montgomery Blair High School.

To train for these competitions, the team gathered in coach James Schafer's room on Tuesdays and Thursdays after school. They practiced by looking through old question sets from archives online and playing practice rounds to simulate real competitions. "We also definitely put in a lot of study time outside of practices to learn all the material, but taking the time in practices to learn how to work together and get better on the buzzers is also important," junior team member Ian Rackow said.

Apart from their end-of-season victories, the team also led an imposing wave of early-season success. They placed first in the Georgetown Fall Tournament in October, the Centennial Invitational in November, the Richard Montgomery (RMHS) Winter Novice in December, and then in the Johns Hopkins Winter Tournament in February. Coming off these huge wins, the Blazers carried on with their strong performance, finishing second place in the University of Maryland Fall Tournament in September and third place in both the Richard Montgomery Spring Tournament and Johns Hopkins Spring Tournament.

In February, the Blazers won bronze in the Montgomery Academic Beltway League, which tested their knowledge of literature, science, math, geography, history, current events, sports and popular culture. "The A team won 42 games in a row except for the last one, which unfortunately dropped them from first to third place," Lodal noted. Despite a close matchup, RMHS took first place.

For the "It's Academic" quiz show, Blair's A team consisted of senior Ben Miller and juniors Anson Berns and Rackow. For other tournaments, sophomore Katherine Lei joined the A team as its fourth member.

Coach Schafer is very proud of the team's effort and attributes the successful season to the work ethic of all the members. "Obviously, winning the Intercity Championship was the highlight for the team. They did really well this year, but, as always, there's more to learn," Schafer said.

According to Lodal, the Super Bowl championship finals round will be televised in about a month on the NBC TV Network. The Blazers will compete again this weekend in Fairfax, Va. for the National Scholastic tournament.