Maryland has a reason to finally acknowledge Blair's cross country team. Senior co-captain Rutvij Pandya ran the race of his life and placed fourth in the Maryland Class 4A Championships. His time of 16:56 was also good enough to tie for eighth in all classes – 1A, 2A, 3A and 4A.

"It's ridiculous," said Pandya, who was the only member of Blair's cross country team to qualify for the state meet. "It hasn't really sunk in yet - I still don't know how it happened." Coming into the race, Pandya was only hoping to crack into the top 20. To his surprise, he was able to crack the top five and be recognized by cross country runners across the state. 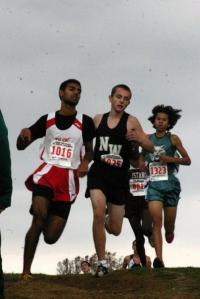 Photo: Pandya (left) used the downhills to pick off other runners. Photo courtesy of Kevin Milsted.

Photo: Pandya (left) used the downhills to pick off other runners. Photo courtesy of Kevin Milsted.

Pandya started out in box one on the far right of the start line, but made a strong start to cut to the middle of the field and into the lead pack. Pandya's strategy was to stay with the lead pack throughout the race. Pandya started the first mile comfortably and with the top 20 runners, handling the course's rolling hills early on. "I started really good," Pandya said. "I was actually feeling good in the first mile."

After the first mile, Pandya hit "the dip", the course's infamous huge hill. But Pandya powered through and kept with the pack. "I felt like I was going to die at the top of the dip," Pandya said. Coming out of the dip, the course turned into a wooded area. This section was "mentally the hardest" for Pandya, but he was able to stay with the group through it.

As the third mile came around, Pandya began to pick off other runners. "They all just started to fade," Pandya said. "And I kept going strong. I was able to pick off a lot of guys in the third mile, I think it was definitely my strongest mile."

The course took another trip down "the dip" which proved beneficial to Pandya. Entering "the dip", Pandya was in 10th place. But he was able to open up his stride down the hill to pass other runners and power up the other side to put him at 5th place with only around 200 meters to go. Pandya kicked hard and was able to pass another runner and slip into 4th place. He nearly ran down third place runner senior Antonio Palmer of Gaithersburg, but was outkicked in the last stretch. 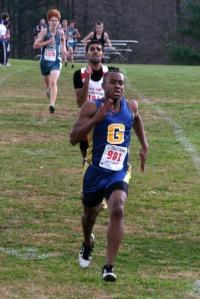 Pandya had a little over a week to prepare for the state meet after the regional on Oct. 30, which he used well. "Physically I had a good week of workouts, a lot of speed and short distance work," Pandya said. "Mentally the coaches just told me to put it all out there and try to get into the top 20."

Pandya hopes next to compete in the Battle of the Potomac race on Nov. 15 at Smokey Glen Farm in Gaithersburg.