Blazers beat up on Barons

Blair rebounds from loss with win against B-CC

After losing its season opener to Quince Orchard, the boys' varsity soccer team (1-1) beat the B-CC Barons (0-1) in their home opener by a score of 3-1. The Blazers were without Head Coach John Haigh, who received a red card after a heated argument in the team's game last Friday. 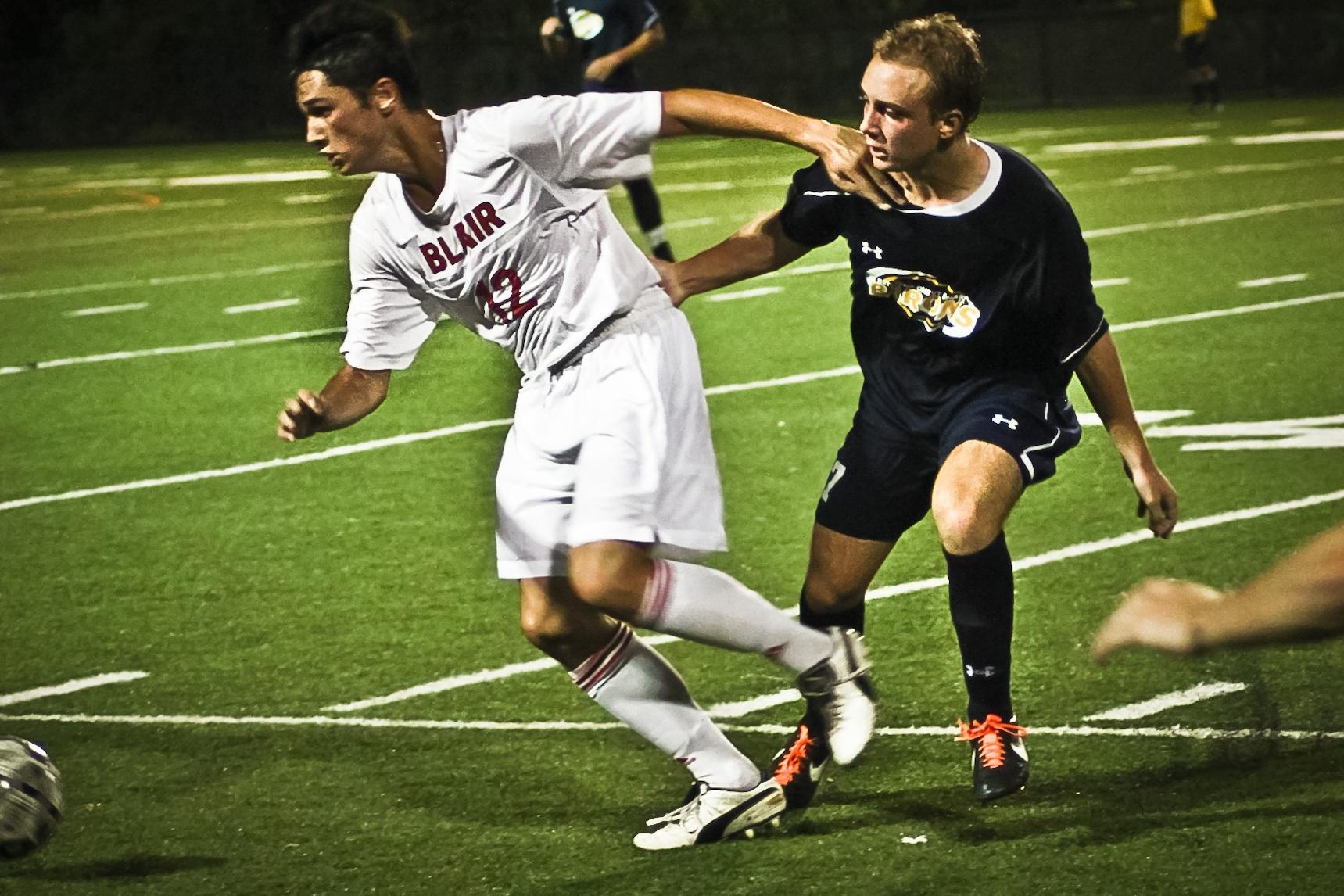 Photo: Junior defender Dylan Crosson helped hold the B-CC offense to one goal before getting injured and having to leave the game.

Photo: Junior defender Dylan Crosson helped hold the B-CC offense to one goal before getting injured and having to leave the game. Photo courtesy of Emma Howells.

Junior Donald Benamna had a standout performance, recording one goal and two assists. Interim coach Vane Wiggins applauded Benamna's play. "Donald had a phenomenal game. He was selfless, and would pass, but also put it away when he could," Wiggins said.

Benamna scored the first goal in the 24th minute when he crossed over two defenders before using his left foot to bury a shot in the bottom right corner. Juniors Ibrahima Kouyate and Jake Rozhansky scored the other two goals, putting away the game for Blair.

The Blazers were able to succeed despite Haigh's absence. Senior co-captain Simon Amato believes Haigh had prepared them plenty before the game. "Haigh talked to us before the game, and we executed the game plan well," Amato said.

Amato credits the team's victory to their mental toughness. "We were stronger mentally in this game," Amato said.

But the game wasn't all good for the Blazers. The team played sloppily in the second half, allowing B-CC to dominate play. In the 65th minute, the Barons finally got on the board, leaving Blair up 2-1. 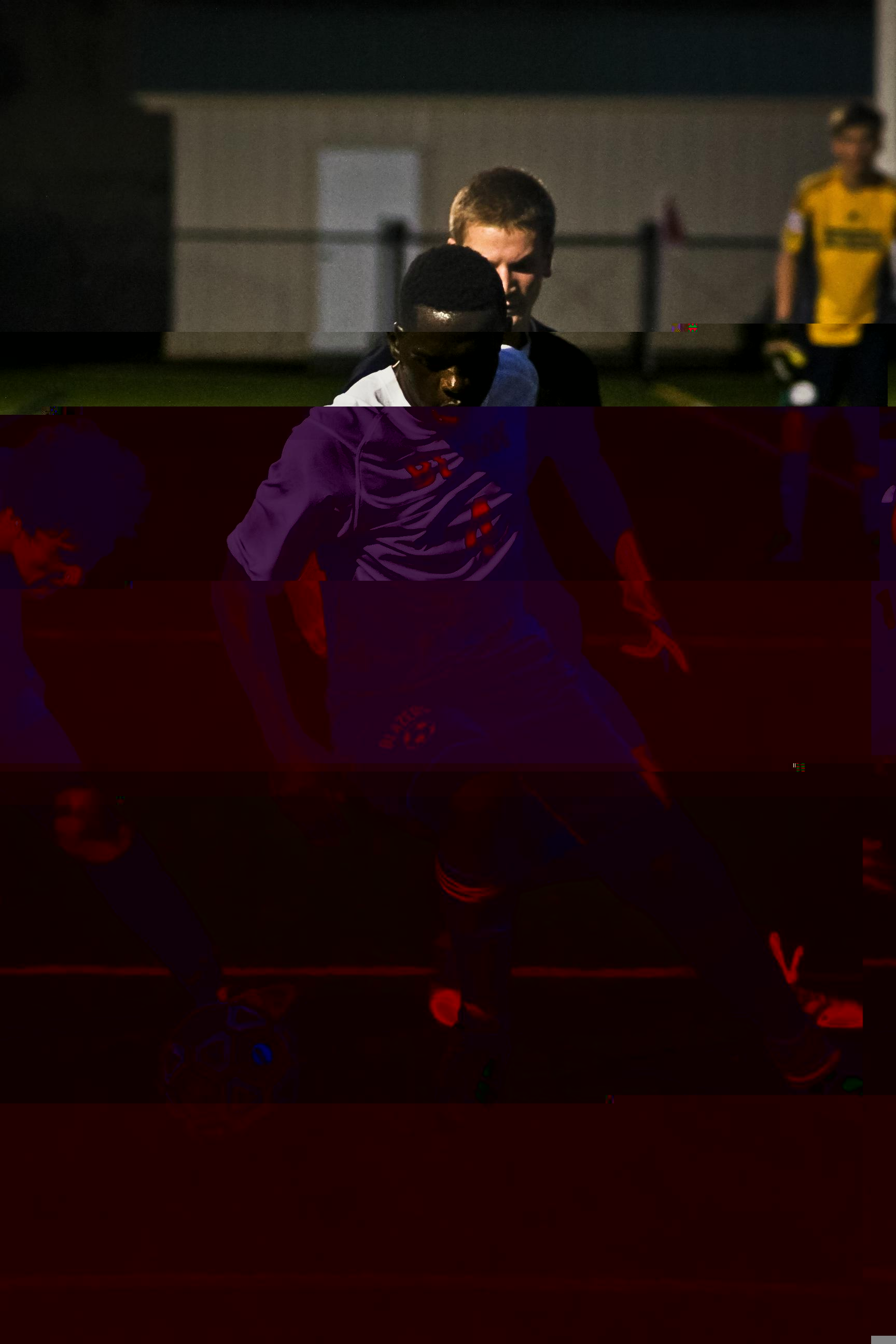 Photo: Senior forward Stallon Ndawula helped set up the rest of the offense and get the Blazers a lead that they wouldn't relinquish.

Photo: Senior forward Stallon Ndawula helped set up the rest of the offense and get the Blazers a lead that they wouldn't relinquish. Photo courtesy of Emma Howells.

Wiggins believes that the Blair defense simply wasn't in the right position to defend the speedy B-CC forwards. "They had fast guys on the outside, and it caused havoc on our defense," Wiggins said.

In the 65th minute, defender Dylan Crosson went down with an injury after sliding to block a shot and getting kicked in the neck by a B-CC striker. Crosson was down on the field for a few minutes before being taken off the field by the coaches and receiving help on the sideline. He is expected to return for the Blazers' next game on Friday, which will be against a national powerhouse, Dematha.

In preparation for their next game, Amato wanted the team to cut down on their sloppy play. "We have to win the ball quicker, work together and definitely have crisper passes," Amato said.

The boys' varsity soccer team will play its next home game against Gaithersburg on Sept. 13 at 7 p.m.