Blair Varsity field hockey (2-2-1) fell to the Churchill Bulldogs on Friday night by a score of 0-2. Blair's defense dominated in the first half, but the team's struggle for possession in the second half led to extensive pressure on the defense, and ultimately led to the two Churchill goals.

It was an intense game from the get-go. The Blazers battled for the ball against the Bulldogs all game long. The defense was put to the test, they marked each player effectively and kept the ball out of the goal in the first half.

Eight minutes into the game, senior attacker Emma Soler hit a drive to senior attacker Maddie Boyer. In an attempt to keep the ball in Blazer's possession, Boyer made a back pass to Soler, but unfortunately Churchill intercepted. There were no offensive players in position for Soler to pass to, leaving Churchill with an easy chance to steal the ball. "I think we need to work on spreading out. We're too close to the other players," senior captain Anna Reachmack said.

The game was played on Blair's side the entire half, except for when Blair found some momentum with a few minutes remaining. Senior midfielder Anna Hukill was able to attempt a shot, but Churchill's goalkeeper blocked it. Senior midfielder Luisa McGarvey followed up with an attempt to make another shot in the last 10 seconds, which was once again blocked. 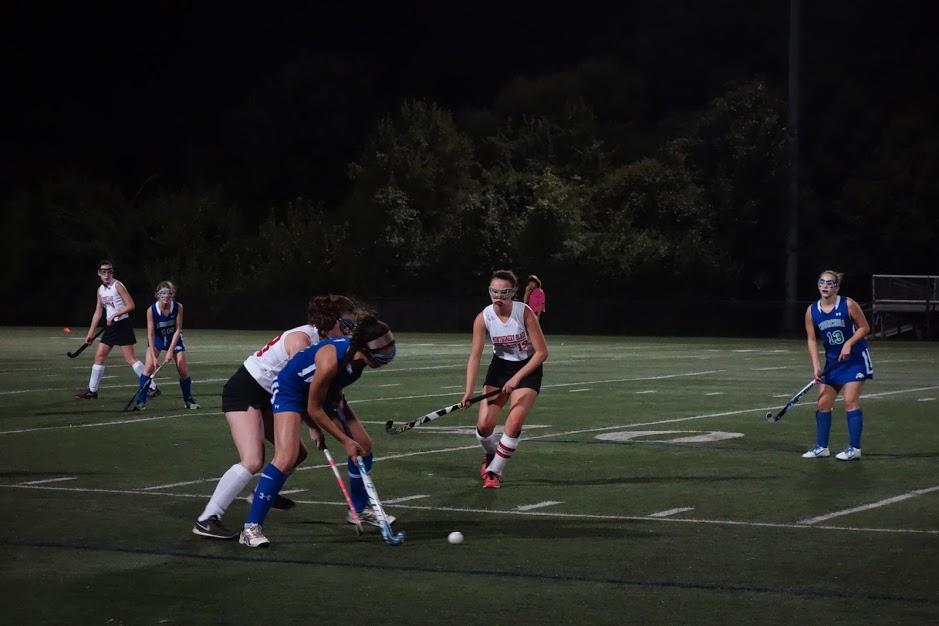 The beginning of the second half allowed Churchill to immediately grab the momentum. Within three minutes, Churchill scored. Senior goalkeeper Susana Perez successfully blocked the next attempt, but Blazers struggled to bounce back after the first goal.

When Blazers received a penalty corner, senior Emma Soler flicked the ball from the sideline. Sophomore attacker Lea Watkins-Chow followed the ball, and helped keep the ball in Blazer's possession until the referee's gave the ball to Churchill for obstruction.

Boyer was able to gain possession of the ball and pass to junior attacker Nika Seider. With 20 minutes left on the clock, Seider worked fast to drive the ball to midfield. Churchill fought for the ball, but the Blazers' effective communication allowed for the ball to remain in their possession. McGarvey was able to block Churchill defenders twice in their battle for the ball. However, they came up empty on the drive.

Blair lost speed in the last 10 minutes of the game. Churchill scored once again. The Blazers defense crowded around the goal and Perez was able to stop one ball from going in, but then it slipped by the next second. "The first half, we were really strong. We were able to keep the ball from going in the goal, and kept the score at 0-0. But, that second shot was beautiful. Those last minutes, we got tired. It happens." Coach Candy Thurman said.

Perez had a number of saves throughout the game, but acknowledged that the two goals could have been prevented. "I think we all played well, but I've done better. I think I need to work on being louder and communicate with the team, " Perez said.

Even though the Blazers lost, they are still satisfied with their performance. "I think we did a great job. [Churchill] beat BCC, and BCC beat us, so we knew that they would be good, but even so, we did great," Reachmack said.