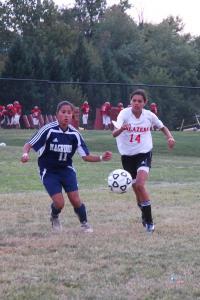 Photo: Sophomore Saleiha Mayer-Marks rushes to get the ball before her opponent from Magruder.

Photo: Sophomore Saleiha Mayer-Marks rushes to get the ball before her opponent from Magruder.

Head coach Robert Gibb was excited about how the team was able to start strong and fast. "This whole season we've been bogged down a little bit at the start," Gibb said. "But today it was like, 'Great, here we go'."

The game started out strong and fast for Blair. The Lady Blazers had good control over the ball and within the first two minutes, Worden had scored her first goal off a straightaway shot on a cleared ball by freshman Jamie Kator. "It was a one-on-one battle between her and the goalie and she pulled through," senior co-captain Anna Rassman said about the goal.

The next goal came shortly after, scored around the eighth minute of play. Worden was passing the ball across the field and a defender inadvertently kicked the ball into the Magruder goal, raising the score to 2-0.

Blair's hot streak cooled off later in the second half. Due to a series of penalties, the Blair offense was never offered a clear shot at the goal. However, the Blazer defense covered Magruder closely and did not allow them into the goal either. With around 10 minutes left in the game, senior keeper Xenia Oroxom unintentionally punted the ball outside of the goalie box, warranting a Magruder penalty kick. However, Magurder's shot sailed over the goal, ensuring a Blair win.

Worden said that she was proud of her teammates for maintaining good sportsmanship throughout the game, which at times was difficult. "We were a classier team," said Worden. "We kept up physically and held our own." Gibb also noted that there was extra physical contact. "The players nipped at each other sometimes," he said.

With around nine minutes left in the second half, referees gave Blair a team yellow card because they felt that the Blair fan base was protesting calls too boisterously. Freshman keeper Lena Meyerson did not feel that the fans were too raucous. "I'm glad that they support our team," Meyerson said. "I don't think that they should have given us that penalty because it's not our job to keep the fans quiet."

Gibb was pleased with the way that the team has started out so far, but feels that there is room for improvement. "We can play better," Gibb said. "We need to focus and put games together better." However, Gibb is feeling good about the team's upcoming schedule. "We'll be ready," Gibb said.