Blazers prepare for the end, the end of Star Wars that is

Blazers cope with disappointment and excitement regarding beloved movies

Senior Katie Schlebecker knows exactly what she is - a Star Wars freak.

It starts with her buying a ticket way in advance at an unknown theatre somewhere in Bethesda, before the Uptown or Majestic tickets were available. Schlebecker will watch the final installment of the Star Wars franchise, "Revenge of the Sith," at midnight the day before it opens nationally and is even considering dressing up in a white robe with her hair in the famous bun style for what she calls "doing the whole Princess Leia thing." 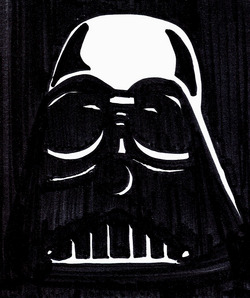 Photo:
Schlebecker has got her ticket, her theatre and perhaps even her costume. She is the ultimate embodiment of the consummate Star Wars fan who eagerly awaits the summation of Anankin's descent into evil and his transformation into Lord Vader, the main character of "Sith."

Growing up in a galaxy far, far away

For many Blazers, including junior Carter Baldwin, Star Wars has played a significant role in their childhood years. Baldwin racks his brain for how long he has been a fan but says he cannot remember that far back. He instead calls on his mom for help. "You've been a Star Wars fan since you were three," she replies.

"That's all I watched until I was older," Baldwin adds on.

Schlebecker also remembers watching Star Wars her entire life. "I'm not as crazy obsessed as I was when I was younger," she says. The re-releasing of the original trilogy, which includes "A New Hope," "The Empire Strikes Back" and "The Return of the Jedi," spurred Schlebecker to revisit her childhood admiration for Star Wars. "I watch the original trilogy all of the time," Schlebecker boasts.

Unlike Schlebecker, Baldwin has become disillusioned with Star Wars ever since episodes one and two debuted in 1999. Baldwin believes "The Phantom Menace," which grossed globally $922,379,000 according to the Internet Movie Database, was "just a horrible movie." Baldwin feels that George Lucas, father of Star Wars, lost his touch. "The first three [episodes 4, 5 and 6] were amazing, even groundbreaking," Baldwin explains. "But 'The Phantom Menace' or 'Attack of the Clones' didn't improve on anything."

Because of his disappointment with the first two prequel movies, Baldwin has low expectations of "Sith." "I'm keeping my hopes up for 'Sith,' but I expect my hopes will be crushed." Baldwin goes so far to even make an analogy to the last election. "Last year, I knew Bush was going to win, but I was hoping, hoping, hoping that Kerry would win. It's the same for 'Sith,'" he says.

Schlebecker, on the other hand, is hooked on the first two prequels. "I liked how 'Attack of the Clones' and 'Phantom Menace' explain what happened before the original trilogy. Like, I love how you can see Bobba Fett before he becomes the bounty hunter," she says.

In the end, Schlebecker acknowledges that people have to take a leap of faith in order to truly appreciate any Star Wars movie. "You just have to like science fiction," she says.

The future of Blazer fandom

Baldwin can agree with Schlebecker's statement, but what pains him is to see Lucas make more tasteless movies about Star Wars that damper the Star Wars magic. Baldwin also dislikes the rumors of a new trilogy set after the original. "Everything that's been said has been said in so many books on what happens after Star Wars," Baldwin says. "If he makes another [trilogy] it'll affect my fandom."

Schlebecker, though, knows what is on Lucas' mind. "You know George. He'll find a way to con us into getting our love for another Star Wars," she muses.

In the midst of what Baldwin considers a tragedy in Star Wars history (the first two prequels), Baldwin sees himself loving Star Wars forever. "I'm looking towards the future," Bladwin says. "I'll be gloating to little kids saying that I saw the first [two] Star Wars [prequels] when they first came out."

1980 - "Star Wars: Episode V - The Empire Strikes Back" released. "Luke I am your father" quickly becomes one of the most parodied phrases in the English Language.

1983 - "Star Wars: Episode VI - Return of the Jedi" released. Darth Vader is brought back to the light side by his son. Kids everywhere pass their summer days making buzzing noises and having fake lightsaber duels in their front yards.

2002 - "Star Wars: Episode II - Attack of the Clones" released. Fans everywhere rejoice at seeing Yoda fight with a lightsaber after all this time.

Cost of making Episode IV, according to supershadow.com - $10 million

Money generated by Star Wars and associated merchandise, according to forbes.com - over $20 billion

Amount of money that employers will lose due to workers playing hooky to see Episode III, estimated by New York Post Online - $627 million