Blazers tie for second at states

The boys' track and field team tied for second place at the Maryland 4A State Championship Meet on Saturday, May 24 at Morgan State University. The team brought home three state champion titles in the 4x200m relay, the 4x400m relay and the 200m dash.

The meet started off well for the Blazers, as senior Mohamed Mansaray qualified for the final section of the 100m dash with the third fastest qualifying time in 10.94. First time runner senior Kingsley Asare placed ninth in preliminaries, barely missing the final qualifying spot by .01 seconds. 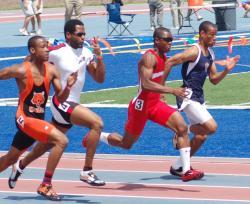 Mansaray came back to qualify for the finals of the 200m dash along with junior Jonathan Haughton. The pair then went on to run in the 4x200m relay along with senior co-captain Louis Varella and junior Chris Grindley.

Haughton led off the race for the Blazers, getting the team quickly into first place, which they would never give up. Haughton handed off to Grindley who kept a steady lead before giving the baton to Varella. Varella opened it up and with 200m left to go, handed off to Mansaray, who sealed the victory for the team.

Junior Victor Wang and his brother, senior Alex Wang, both competed in the shot put. Victor placed seventh, throwing the same distance as the sixth place finisher (47 feet and one inch), but received the lower place due to a foul within his throws. Alex placed ninth with a throw of 46 feet and five and three-quarters of an inch.

The second day of the meet started off in similar fashion, with Mansaray finishing fourth in the 100m dash. Mansaray got off the blocks quickly, but was outleaned at the finish line to Severna Park's Terrence Major, who ran the same time as Mansaray—11.02. Major's torso appeared on the camera slightly before Mansaray's, giving him the third place finish and adding two more points to the Severna Park team score. 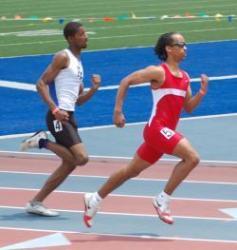 Photo: Senior Louis Varella was disqualified after finishing with the second fastest time in the 400m dash.

Photo: Senior Louis Varella was disqualified after finishing with the second fastest time in the 400m dash.

In the 400m dash, Varella was seeded second and ran a strong race against High Point's Leslie Murray. The two pulled away from the rest of the pack around the second turn and with 150m left to go, it was a two-man race. Both runners picked up their pace, but Murray maintained his one stride lead, as the two finished over a second ahead of the rest of the pack with times of 48.33 and 48.67 respectively. However, during the race, Varella stepped on the line, was subsequently disqualified and would not receive a silver medal or the eight points for the team.

The next event for the Blazers was the 300m hurdles in which senior Brandon Hudgins was competing. Hudgins started off strong, but stumbled after the second hurdle, causing him to lose his rhythm. Hudgins finished with a respectable time of 43.98, but did not place high enough to score.

The team scored the most points in the 200m dash, as Haughton and Mansaray placed first and fourth respectively. From the time the gun went off, Haughton took the lead and never looked back, finishing in a time of 21.91; Haughton is the first Montgomery County athlete to take home the gold in the 200m dash in 10 years. Mansaray had a very different race, as he held back the first 100 meters before closing the gap the last 50 meters of the race to come in fourth place overall, earning four points for Blair. 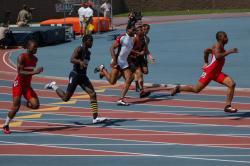 The 4x100m relay placed third overall, nearly tying their season best in a time of 43.39. Though the relay started off strong with blazing splits from Asare and Haughton, a sloppy handoff between Haughton and Grindley cost the team crucial seconds, which they could not make up with their speed.

The boys' were favored to win the 4x400m relay and proved why by the end of the race. Grindley got out to a fast start, but faded near the end before handing off to Haughton, who quickly cut in and lead the tight pack after 200m of his leg. Haughton opened it up and pulled away before handing off to senior Enuma Nzesi. Nzesi continued to open the gap and gave the team a sizable lead before Varella took over. Despite a great effort from Eleanor Roosevelt's anchor leg, Varella held onto the lead and the team finished with the fastest 4x400m relay time of the day in all classifications of 3:20.42.

At the end of the day, the Blazers finished with 44 points, tying Quince Orchard and finishing second to Eleanor Roosevelt with 46 points. This weekend marked Blair's most triumphant experience at states in several decades and concluded a season full of record-breaking performances and gold medals.

Christina Mullen. Christina Mullen, contrary to popular belief, does not have a mullet. She is an amazing beast who enjoys ballin, running and making beautiful music. Most people worship a god. Christina worships food. She partakes in powwows and picnics on a regular basis with her track … More »