The Blair Blazers (24-4) won handily over the Einstein Titans (0-10) 72-8 on Jan. 18 after the match was postponed from the day before due to the snow closure. Wrestlers were given a one pound weight allowance for the match due to the missed day of practice. The Blazers used this match as a tune-up before going into a two-day weekend tournament, the Panther Invitational Tournament.

The first match was forfeited to freshman Brian McCaw (106) by the Titans, to start the match off 6-0 Blair. Next up was senior captain Ryan Handel (113) who wasted no time getting his opponent to the ground, securing his pin in nine seconds for another 6 points to Blair.

Junior Muhammad Baig (120) fought for three periods and fended off the pin. He remained on bottom for the majority of the first period, but improved as the match went on. By the end of the third period Baig managed to score a point with an escape, but by the end of the match his opponent had a 16-1 lead, earning Einstein 5 points for a technical fall.

The 5 points awarded to Einstein for the win were quickly made up with three forfeits for Junior Biruk Tona (126), and seniors Bryan Huynh (132) and Noah Chopra-Khan (138), bringing the overall score to 30-5.

Sophomore Ryan Temple (145) faced off his opponent for the full six minutes in a close match that he ultimately lost. Temple was taken down early in the first period, but used a whizzer to score a takedown in the second. Temple fought multiple attempts at pins in the third period, but was able to keep the match score close at 3-9, allowing his opponent to win only three points for the match. 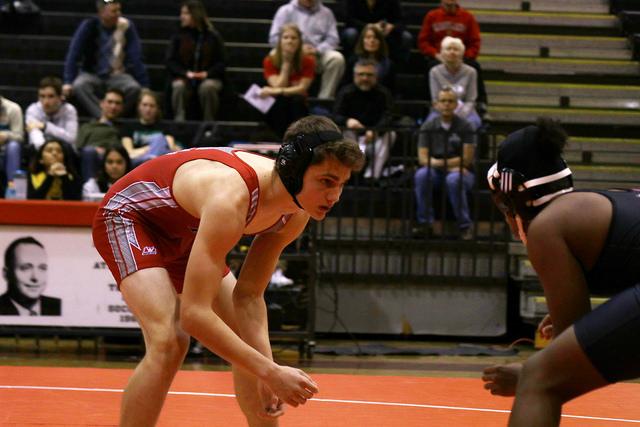 Photo: Moore eyes his opponent before making the next move.

Photo: Moore eyes his opponent before making the next move.  Photo courtesy of Morgan Casey.

Sophomore Brennan Moore lead a strong performance in his home debut varsity wrestling match. Moore stayed aggressive in the first period and transitioned from a takedown to a claw to get the pin at 1:23, raising Blair's score to 36-8.

Senior Captain Ryan Holland racked up 10 points in the first period with a takedown and three near falls, but was unable to pin his opponent. He came back in the second period with a quick takedown which transitioned to a pin at 1:22. 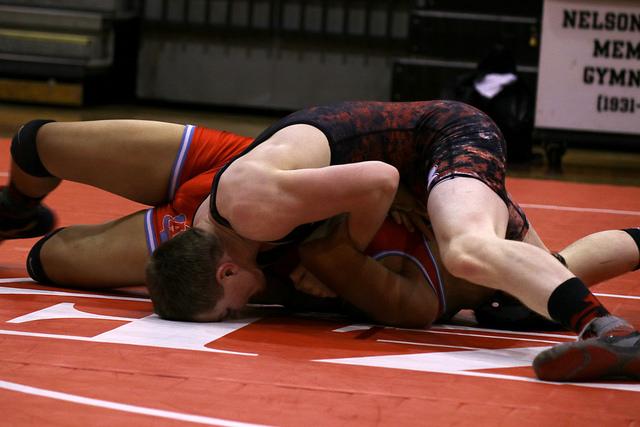 Photo: Holland secures the pin for his record-breaking 97th win. The record was previously held by Billy Saturno. ​

Photo: Holland secures the pin for his record-breaking 97th win. The record was previously held by Billy Saturno. ​ Photo courtesy of Morgan Casey.

Holland used the match to practice maneuvers for his upcoming tournament. "I was trying this sort of arm-bar hook thing, and I got some points out of it but I didn't get the pin so then I had to go back to some basic moves I already knew," Holland said. Holland's win was his 97th career varsity win, positioning him as the all time winningest wrestler in school history.

Another forfeit to Blair's junior Ernest Son (170) brought the score up to 48-8. Senior Pelumi Akinpelu (180) was the last Blazer of the night to wrestle and hit a powerful takedown at the beginning of the period, followed by a roll-through tilt for a pin at 47 seconds.

The last three matches to Senior Rudy Ngougni (220) and sophomores Joel Paulino (195) and Mervin Mancia (285) were forfeited, ending the match with a winning score for Blair of 72-8.

The Blazers are hoping for success in the Panther Invitational Tournament this weekend, and will work on focusing on each individual match, and taking the season one day at a time. "I gotta take it one match at a time and focus on my opponent in front of me," Holland said.

The Blazers' next home match is their senior night on Jan. 30 at 6:15 against Springbrook and seniors hope to see friends and family cheering in the stands.