Bocce on the rise

Usually when you roll something this good, it's illegal

Junior Falla Mathieu bends down. After a moment of concentration, she gently tosses a ball forward. It bounces once, twice, then glides down the gym floor before coming to stop. It's now the closest to the yellow ball, and Blair wins the game. The sport is bocce, and a small but dedicated crowd goes wild for Blair's close victory.

Bocce came to Blair as part of a group of sports called allied or corollary athletics for students who haven't played a varsity or JV sport before. Other corollary sports include handball and co-ed softball. The corollary athletic program was initially created as a place for kids who don't have the opportunity to participate in varsity sports, like kids with special needs or accommodations.

Coach and para-educator Melvin Terry started coaching bocce about four years ago, and since then the sport has steadily grown. Bocce gets support from parents, students and staff. The games are typically scheduled around 3:00 or 3:30, so that teams like wrestling and basketball with games later on can stop by to watch the game. Terry has also coached wrestling and football, but has found that in bocce, there's a lot more interaction between coaches and players. As a result, they tend to get to know each other more. For Terry, the game is competitive, but there's a friendly nature between the two teams. At practice, the atmosphere is fun and relaxed, free from the stricter confines of the classroom. "We want to win but at practice it's laid back," Terry explains. Regardless of how they've performed, the team maintains its upbeat vibe. "Win or lose we tend to be pretty positive," Terry says. 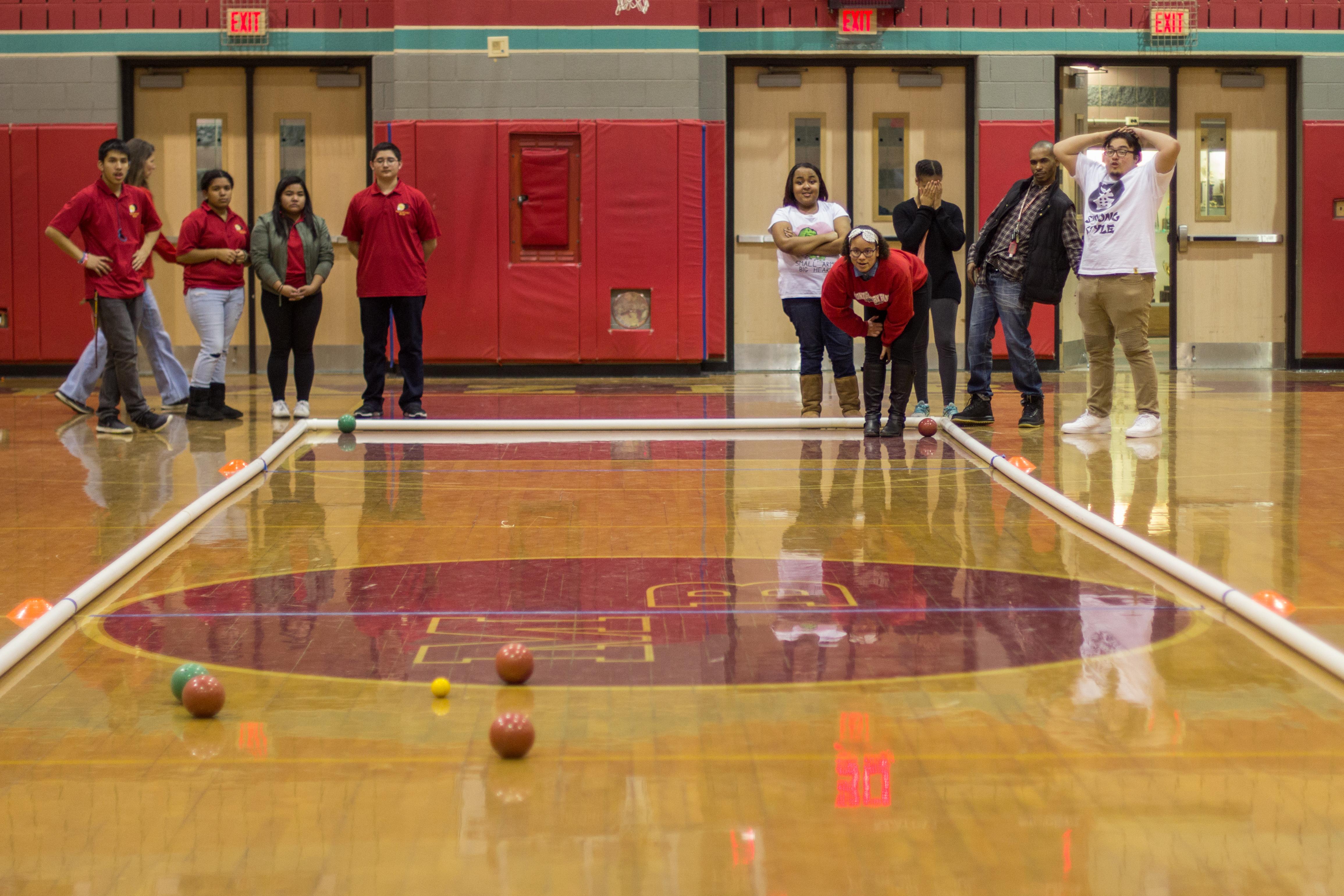 Photo: The teams look on as Nicole Grant's ball rolls down the court.

Photo: The teams look on as Nicole Grant's ball rolls down the court. Photo courtesy of Nicholas Fechner-Mills.

Junior Captain Raul Gonzalez starting playing bocce sophomore year when he found himself in Terry's geometry class. The coach knew that Gonzalez played handball, and recruited him for the winter corollary sport. After looking up bocce, Gonzalez remembered that he used to play as a child with his mother, who is Italian. According to Gonzalez, bocce is an Italian sport. "I guess it just ran through my blood," he explains. What Gonzalez likes most about the game is his positive relationships with his teammates. His sentiment is shared by junior player Tori Brezell. Also recruited during sophomore year, Brezell likes using the different angles of the ball and the railings running down either side of the playing surface to achieve the best roll possible.

According to Terry, a good bocce player has to be able to control the bocce ball and be an accurate roller. An interesting and largely unknown aspect of bocce is that the players have to take their environment into account. "Things we have to consider are the different lumps and bumps of the different gym floors that we have to play on. In that aspect it's almost like golf; you have to be aware of your terrain, adjust for those things," Terry clarifies. The sport is much more difficult than it may first appear. "People come up to us all the time in the hallway [asking] can I try, can I try? They think they can just roll it, but once they feel how the ball rolls it takes some skill," he says. 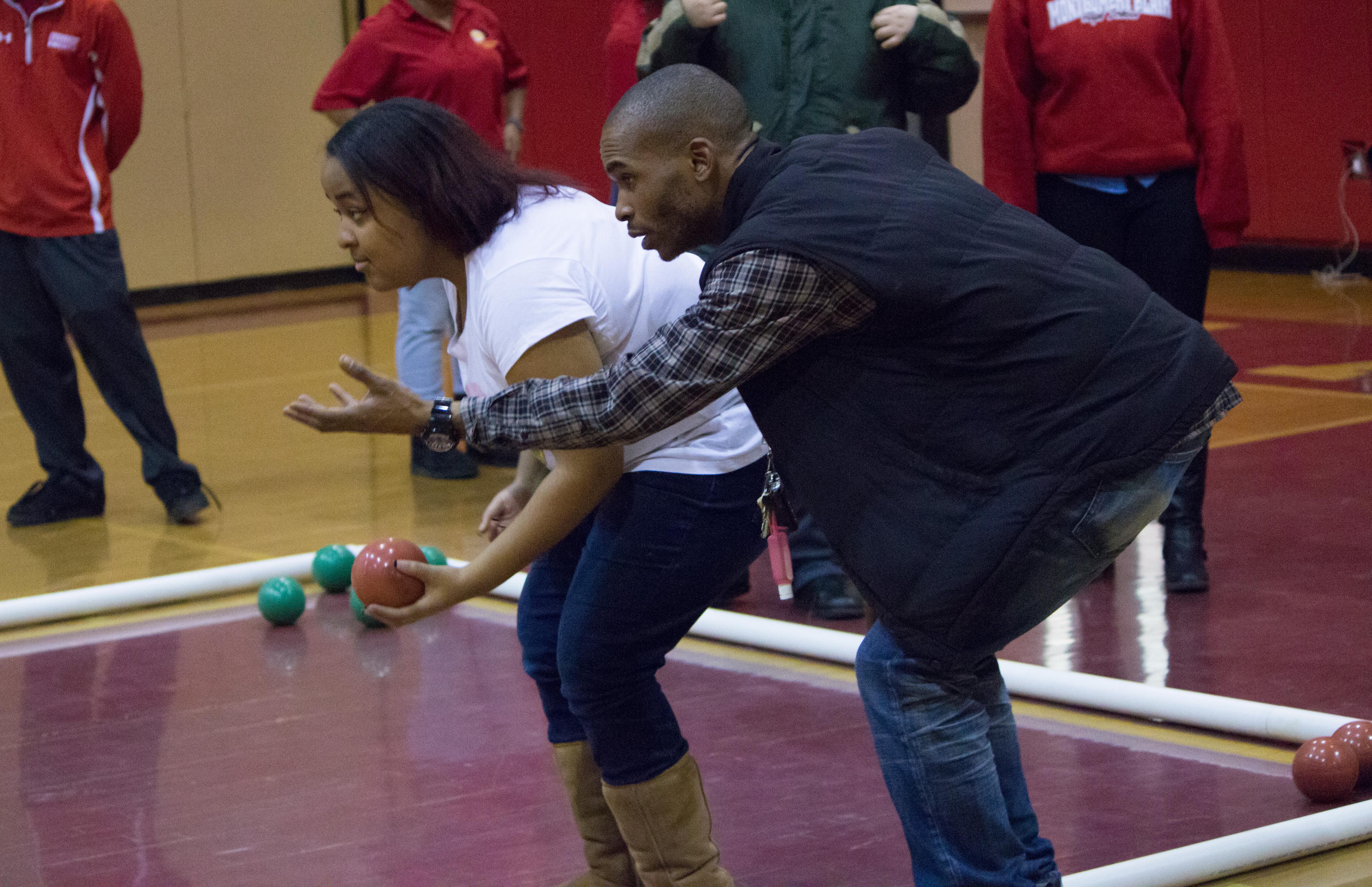 To be successful, a strategy that the team employs during games is to keep the ball close to the rail, using it as a bumper to slow down the ball. Using strategies like this one, the bocce team has three wins and two losses on the season, which Terry predicts will be good enough for third in the division.

Like with most sports, there is an intense passion that fuels the dedication of bocce players. For Gonzalez, what he loves about being on the team is seeing other people have fun. "We see a lot of people with Down syndrome and special needs, and I see them having smiles on their faces. It makes me feel great that I'm actually being a part of a sport that supports this type of game," he says. Terry finds it gratifying just to see a lot of different kids become athletes, and sometimes, it gives kids the confidence they need to go on to try other sports. "It's also good for a lot of kids that probably would never have gotten into the sport or the competitive nature of sports," Terry explains.

Whatever the reason they participate, Blair's bocce players are having fun and winning games, and could use the cheers and support of the greater Blair community. With their season now over, Blair's bocce team achieved third in the division.