Blazers use total team effort to down the Panthers 69-59

Coming home off two close losses, the Blair boys' basketball team (8-6) stepped up the energy and disposed of the Paint Branch Panthers (5-8) 69-59. With 13 different guys contributing in the win, it was undoubtedly a collective effort that helped the Blazers fend off the relentless Panthers.

"The guys have been practicing hard, and there was an opportunity for a lot of guys to play tonight, and everyone contributed,” Coach Damon Pigrom said.

The Blazers' backcourt played a major role in the win, as they used their size advantage to dominate the glass and out-rebound Paint Branch 17-8. Senior guard Danny Canary led the offense by scoring 15 points, eight of which came from the free-throw line. Sophomore forward Julius Cobb broke out to score 14 points as well. "I've been trying to earn playing time in practice getting off of an injury,” Cobb said. Despite the seemingly comfortable ten point win, it was very much a back and forth game that featured numerous lead changes and runs throughout the entire game. 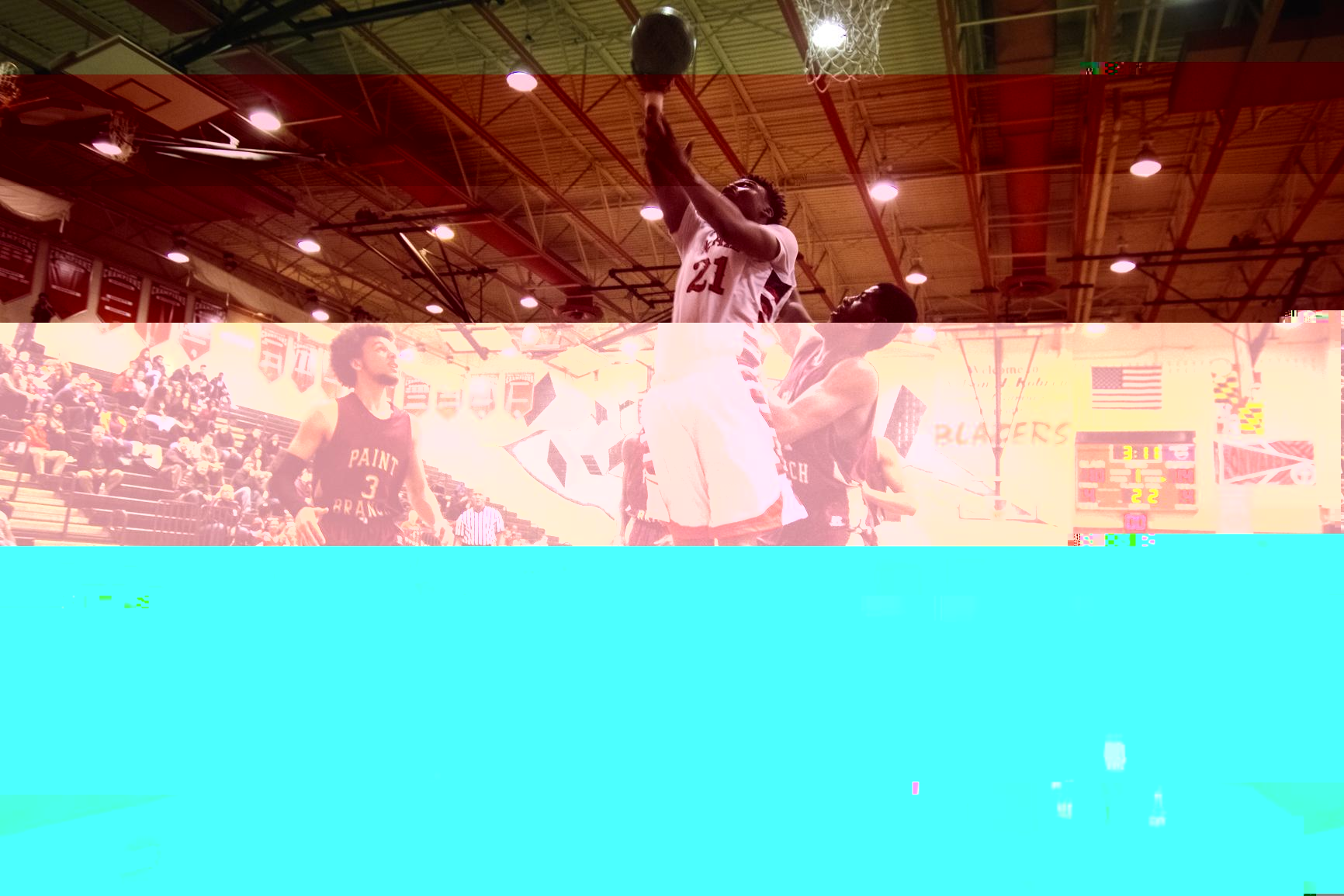 Photo: Jordan Cobb (21) was one of many forwards who helped power the Blazers to a victory.

Photo: Jordan Cobb (21) was one of many forwards who helped power the Blazers to a victory.

The Blazers showed promise right out of the gate as Danny Canary had a three-point play on their very first possession. Then, on Paint Branch's way up the court, Blair's full-court press caused a turnover and resulted in a wide open three pointer for senior forward Yosef Yishak.

For Yishak, it was his first home game of his senior season. Coming off an injury that took him out for the first half of the season, Yishak had a lot of emotion prior to taking the court at Blair and be in the starting lineup on Friday night. "At first it was pretty nerve racking, but I kind of struggled today, but I've still got more games to play,” Yishak said. He finished with six points on two three-pointers.

However, Paint Branch didn't let the Blazers quick start get to them, as the Panthers roared back to take the lead 8-6. Blair struggled to get back in transition following missed shots, allowing Paint Branch to heave the ball downcourt and make easy shots. Blair closed out the first quarter on a high note however, going on an 8-0 run to take the lead 18-14. The second quarter started the same way the first one did as Cobb had a pivotal layup following a hard foul to cap off a 11-0 run.

Blair has consistently struggled with early foul trouble this season, and Friday night was no different. One minute into the second quarter, and both teams were already shooting free-throws as a result of the bonus. Altogether the Blazers had 27 fouls in the game. Paint Branch had 29. As a result both teams had plenty of opportunities to put the game away from the free-throw line, but Blair shot a mere 64% from the line, while Paint Branch shot 61%.

Blair's offense found it difficult to get points on the board in the second quarter. Paint Branch forced a number of turnovers and grabbed a couple of easy steals from the Blazers; many of which resulted in breakaway layups. Paint Branch grabbed the edge at the end of the first half 34-33.

The third quarter has typically been Blair's statement quarter in their wins, and on Friday night they used the third quarter to grab a solid lead. Points came in surplus, as Canary, Yishak, and junior guard Jared Williams all nailed three-pointers. Cobb and senior forward Jordan Johnson also contributed with a couple of offensive rebounds and second-chance opportunities. With a 57-45 lead, the Blazers had all the momentum going into the fourth. 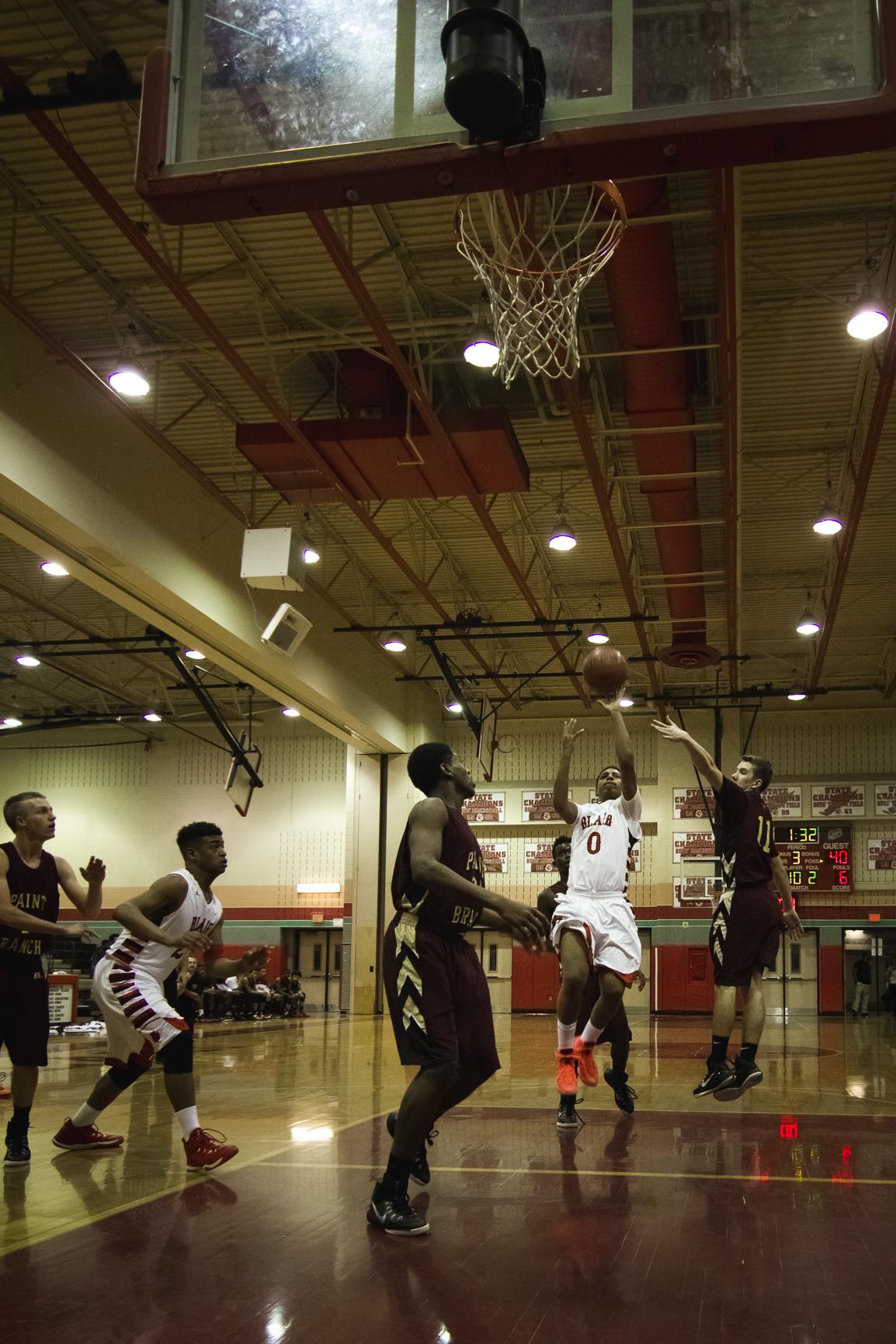 Photo: Sophomore Demetri Cooper pulls up for a floater.

Photo: Sophomore Demetri Cooper pulls up for a floater.

But Paint Branch wasn't ready to go home yet. The Panthers began trapping Blair guards with double-teams around the key in the fourth quarter. After a number of careless Blair turnovers and easy transition baskets for the Panthers, the score was suddenly 60-55 with only a few minutes left in the game.

The win was sealed around the two-minute mark when Cobb made a clutch shot down low, and proceeded to get fouled as well. He missed the free-throw, but Johnson was quick to grab the offensive rebound and find a cutting Cobb for an easy layup, turning into a four-point sequence for the Blazers, putting them up 64-55.

Blair had no trouble running out the clock by passing the ball around the key. Paint Branch began to intentionally foul with a minute and a half left, but the Blazers had put the game away. Following a number of fouls, including a flagrant, Blair ended the game with a 69-59 win.

At the end of the day, the Blazers won by an impressive ten points. The offense executed efficiently all night, but no one was proud about allowing 59 points either. "We could've boxed better,” Cobb said.

Prior to this game, the Blazers struggled to communicate at times with each other. At some points, players showed blatant frustration towards one another. Tonight however, was a completely different story. With a few exceptions, the offense seemed in sync with one another for almost the entire game. While there were many different lineups throughout the night, the changing in players didn't slow the Blazers down. "During practice we had a talk about playing as a team, and it showed tonight,” Cobb said, "and we plan to continue working on our chemistry,” he added.

"Basketball is a marathon,” Coach Pigrom said, "right now we just want to keep getting better and better, and by playoff time hopefully we will be playing our best basketball.”