Blair wins in first round of playoffs

Riding on the wave of six straight wins, the Blair boys' varsity soccer team (10-4) took down the Clarksburg Coyotes (3-8-1) by a score of 4-0 to advance to the second round of the playoffs. The team got goals from four different players as its offense buoyed the defense, which struggled for the majority of the game. 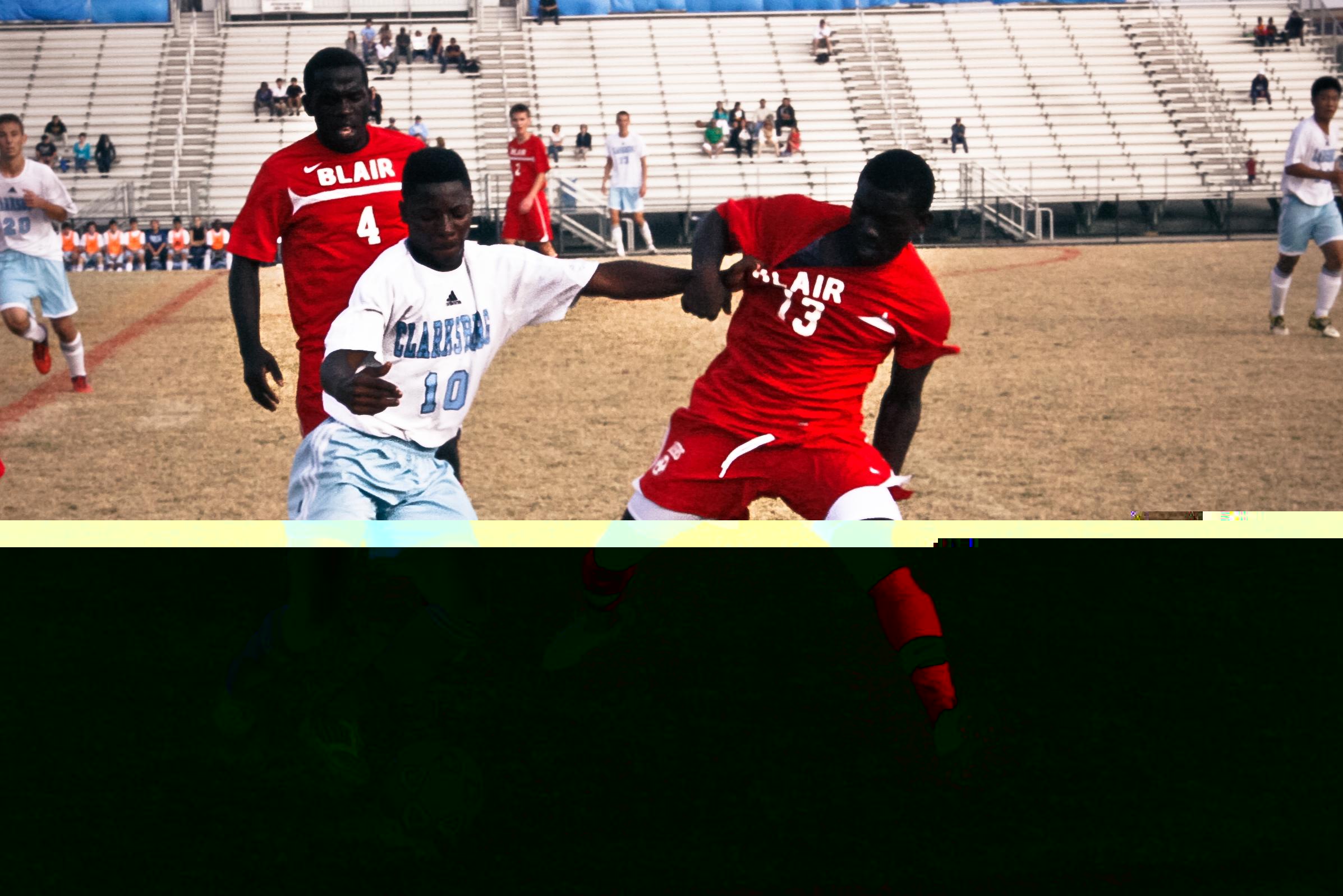 Photo: Junior Keenthy Yeboah gets scrappy as he battles with a Clarksburg defender in order to keep the Blair shutout alive.

Photo: Junior Keenthy Yeboah gets scrappy as he battles with a Clarksburg defender in order to keep the Blair shutout alive.

The opening tally came in the 19th minute when senior Aron Coste headed the ball into the left side of the net off a pass from junior Ibrahim Kouyate. Blair scored twice more in the first half as senior Stallon Ndawula scored in the 26th minute and junior Keenthy Yeboah escaped multiple defenders before finishing at the far post in the 38th minute.

Offense hasn't been a strong point for the Blazers this season as they have consistently struggled to find chemistry with each other and score goals. The reason for this late season success and the ability to score four times against Clarksburg was time, according to head coach John Haigh. "Whole year we've been a possession team. Possession and working together takes time. It's just a time thing,” Haigh said.

Clarksburg though did have success against the Blair backline due to sloppy play according to junior defender Alex Epstein. "We play sloppy versus worse teams. We play down to team's level,” Epstein said. 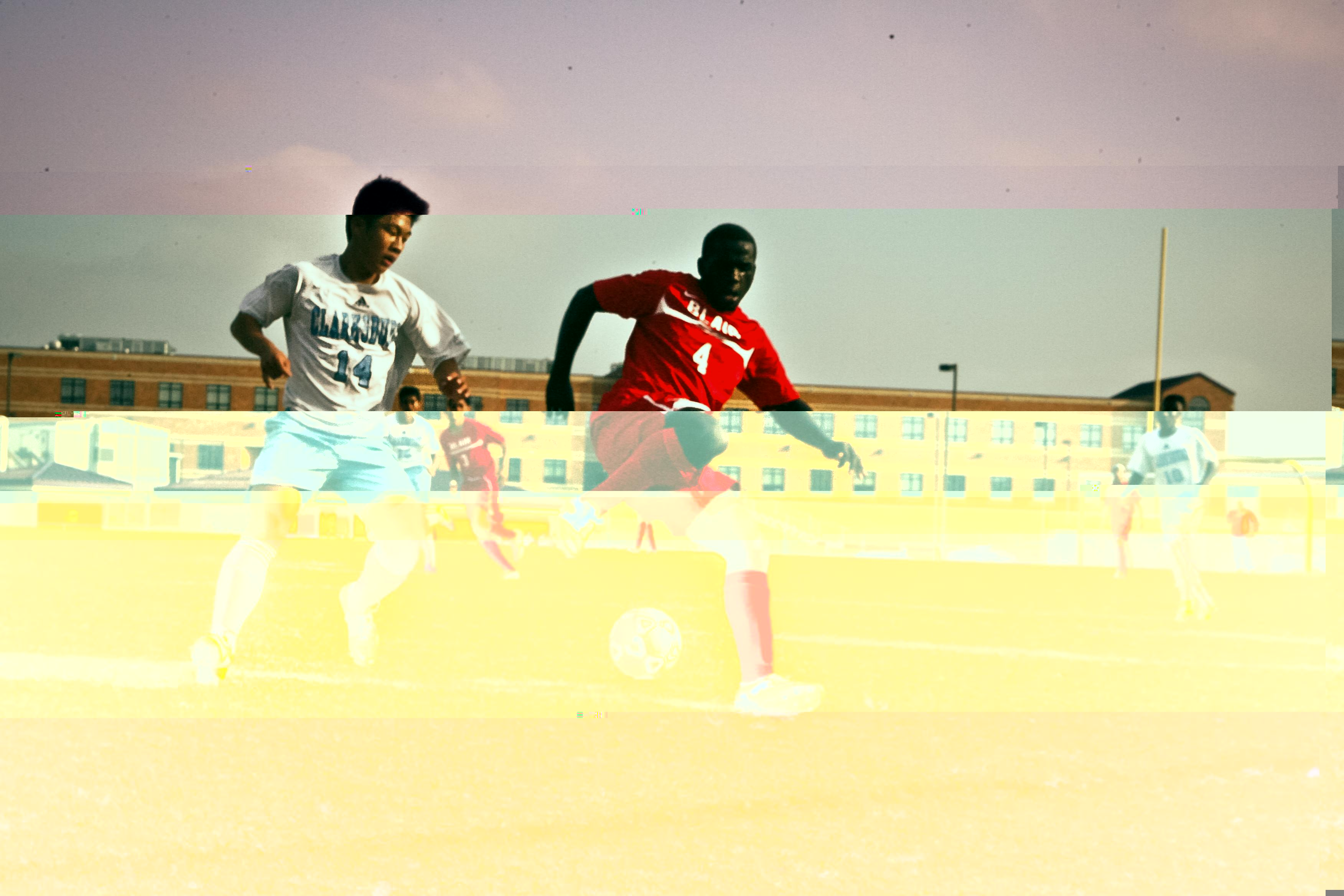 Photo: After scoring a goal in the first half, senior Stallon Ndawula fights for a free ball in order to extend the Blazer lead.

Photo: After scoring a goal in the first half, senior Stallon Ndawula fights for a free ball in order to extend the Blazer lead.

While Clarksburg was never able to put the ball in the back of the net, it wasn't for a lack of chances. The Coyotes got two good chances to start the second half but sophomore goalkeeper Luis Cruz was able to make key saves on both shots to keep the shutout going.

The offensive success continued into the second half as on the first possession of the half Coste once again got a good look at the goal but was unable to score. Coste and the offense continued to attack the net throughout the second half before junior Donald Benamna tallied another goal for the Blazers in the 68th minute. Benamna had the ball in the box, made space with his left forearm and used that space to chip a shot over the goalkeeper.

The atmosphere surrounding their first playoff game didn't distract the team as they focused on getting ahead and keeping the pressure on. The Blazers will be playing Walter Johnson in the next round, the team that knocked them out in the semifinals last year. According to Epstein it will only be extra motivation. "It's a revenge game. We know we're a better team. We just have to play them tight and can't give them chances,” Epstein said.

Haigh confirmed this mentality that Epstein conveys. "They felt like they were better team this year and some even felt it last year. We're looking forward to it,” Haigh said.

The Blair coaches and players are preparing to improve their defense so as to limit the Wildcats' chances at the goal. The team also knows that if they had converted all their opportunities against Clarksburg they would have likely had more than four goals.

But the Blazers aren't worried. "It's winnable. We're never out of a game,” Haigh said.

The Blair boys' soccer team will play their next playoff game against Walter Johnson at 7:00 p.m. on Oct. 30.