Boys' soccer eliminated from the playoffs in a penalty kick shootout

Blair falls in an intense match against BCC

Boys' varsity soccer (6-3-4) played an exciting double-overtime game against Bethesda Chevy Chase (7-3-2) on Thursday, but lost on a shootout with a final score of 3-2.

Blair started off their first playoff game with a bang as they battled a strong BCC team. Less than three minutes passed before Sean Munroe received an assist from Jimmy McMillian and easily scored a goal. With the momentum of that first goal, Blair dominated on offense. BCC had some talented players, but Blair kept possession of the ball for the majority of the half, not even giving them a chance to score.

Blair's defense, led by seniors Ashe Durban and Kyle Kirwan, was quick to clear any BCC chances in the beginning stages of play. BCC was quick, but Blair responded with a powerful determination that propelled them to keep the ball away from their opponents. Blair worked the entire field and outplayed BCC for a solid half of the game, and the score at halftime was 1-0. 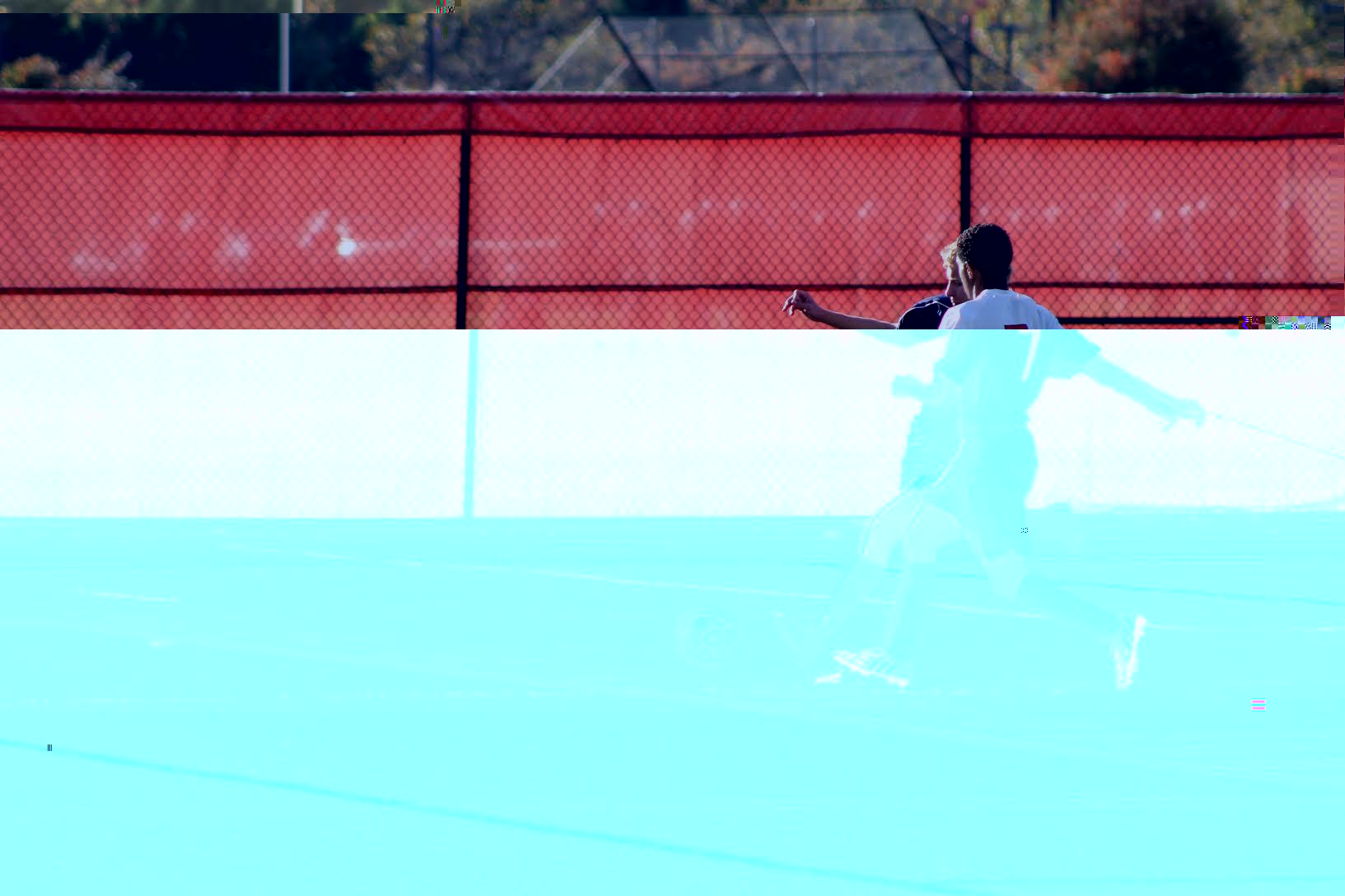 Photo: Senior Eyob Aemero tries to beat a B-CC player to the ball.

As the second half started, Blair continued to pressure BCC. It was clear early on, however, that BCC had not given up. As a result, the intensity increased and BCC got more and more aggressive. BCC scored eight minutes into the half to even the score.

Two minutes later, Jordi Long passed the ball to captain Rohan Oprisko, whose clean kick sent the ball soaring past the BCC goalie. With Blair in the lead once again, BCC's playing became rough as they fought to get even and the number of fouls increased. The intensity peaked as BCC scored another goal, tying the game.

Overtime started and both teams eagerly fought for a goal. A sense of urgency emanated from the field as both teams tried to end the game. After ten minutes, nobody had scored, and the second overtime period began. With nine seconds left, Blair was set up for a free kick. Senior Armel Tueno Nguimfack took the kick, but Blair couldn't get a goal. The teams then prepared for a shootout. 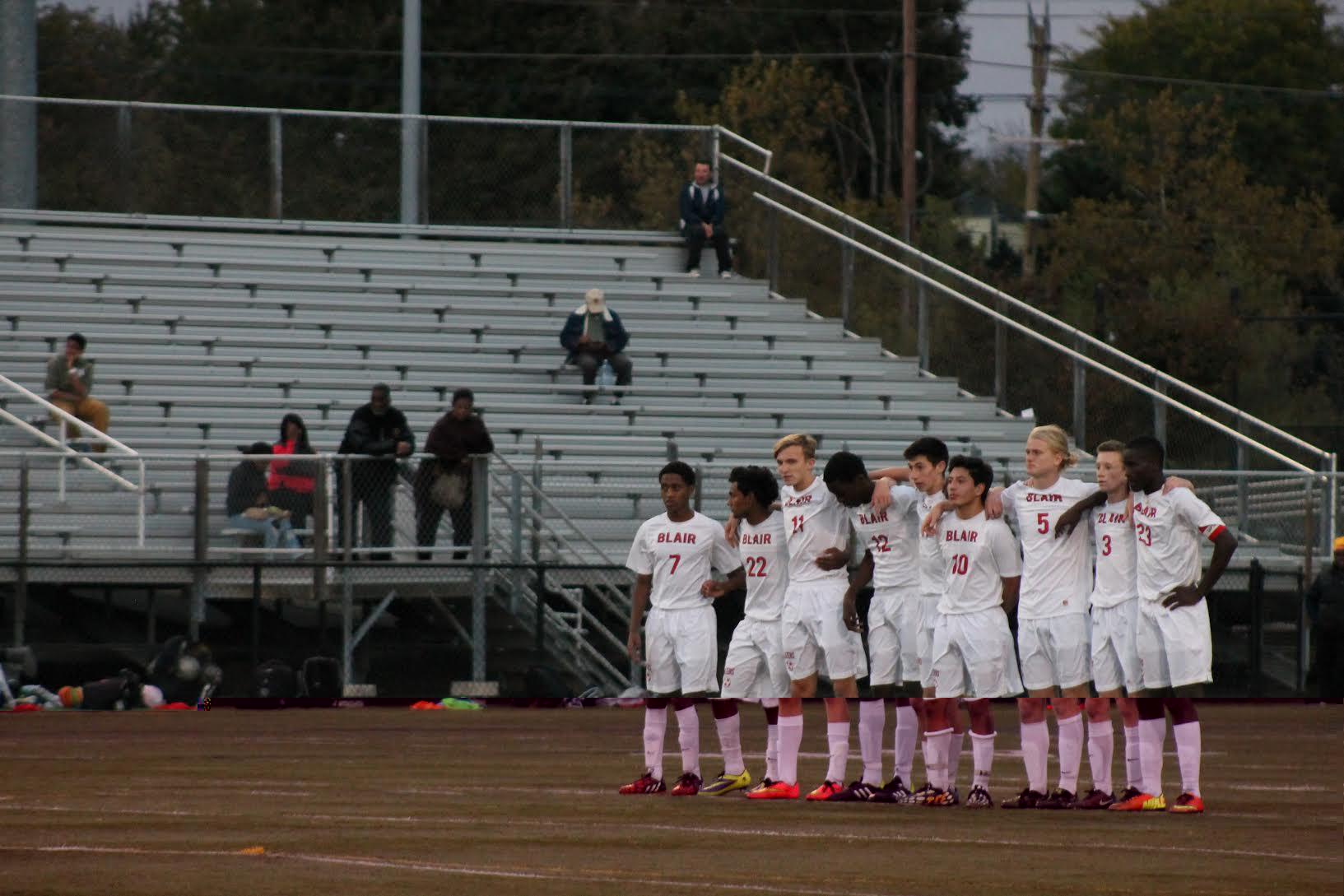 Photo: Blair players line up in preparation for the penalty kick shootout

The entire stadium held its breath as the shootout began. BCC had the first kick and goalie Charles Waltz-Chesnaye dived, but missed. Through the first four rounds of the penalty kick shootout, the anxious fans in Blazer Stadium were yet to see a missed kick. However, After BCC scored on their fifth penalty kick, Blair's fifth and final shot was saved by the BCC goalie.

Despite the disappointing loss, Blair played an excellent game and was able to outplay a talented BCC team. Coach John Haigh is proud of the team's effort. "We looked pretty strong coming in. But it's soccer and you can only score so many goals," he said. Haigh is pleased that Blair won their division and feels that they have had a fantastic season.