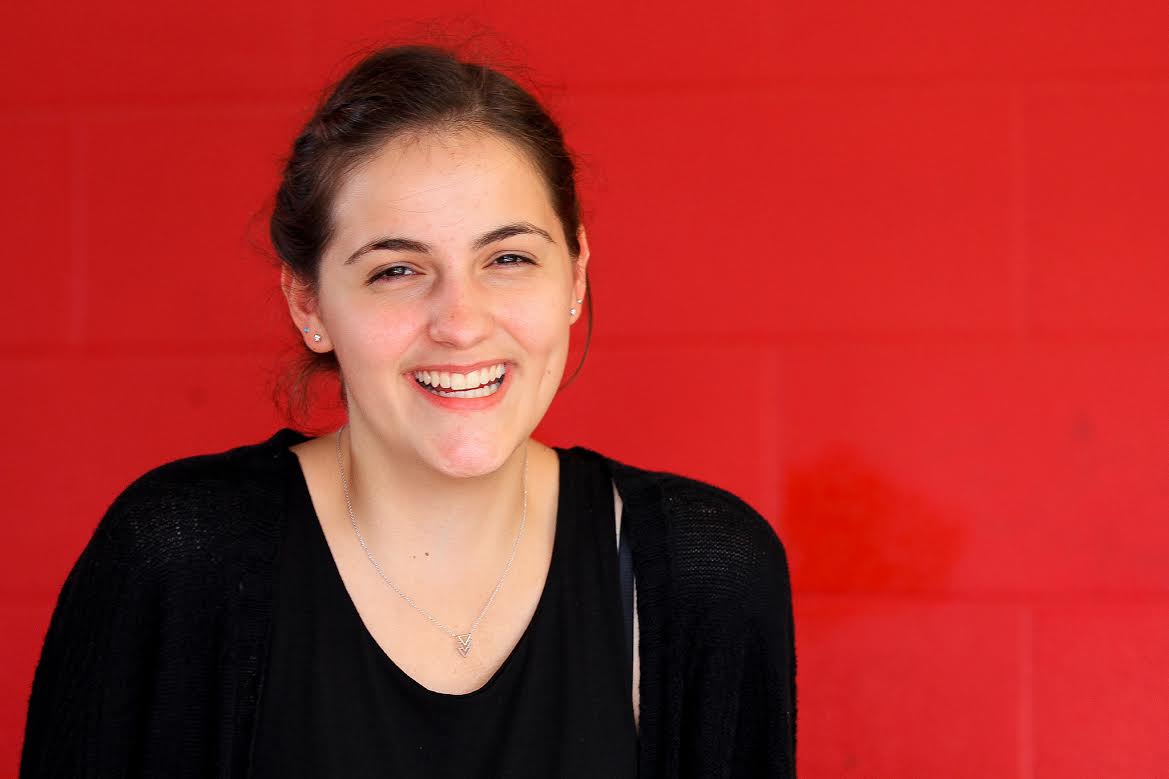 Name: Ellie Struewing
Position: Online Features Editor
Graduation Year: 2016
My name is Ellie and I like to listen to music and watch The Office. I like the color gray and buying office supplies.

It's one thing to have a job to make money, but often it's all too easy to get stuck in a routine and forget to be creative. "I think it's important that when people get older that they don't give up their artistic interests. Even though I'm 49, I don't think it's silly that I'm trying to play in rock and roll bands," Mayo says. Mayo is one of several teachers at Blair who have found a way to balance teaching and music.

A passion for Shakespeare

It is her passion for Shakespeare and acting that has carried junior Ronee Goldman to the final round of the English Speaking Union (ESU) National Shakespeare Competition.

Dr. Dog joined by the Baltimore Symphony Orchestra for an exciting show

On Thursday night at the Meyerhoff Symphony Hall in Baltimore, the Baltimore Symphony Orchestra, Dr. Dog and the Baltimore Boom Bap Society came together in perfect harmony.

In the past few months, pictures of the Renwick have appeared on Instagram and Snapchat or Tumblr nearly every day, and to see so many enjoying art isn't discouraging, it's exciting.

Every once in a while, there is a school day that really stands out, leave an impression and allow students to learn in new ways. These days are field trips.

College mail and why it fails

Colleges and universities should reconsider the storm of mail that they send to students and refocus their efforts (and funding) on more tangible ways to help students see if that school is the right fit for them.

Obama makes changes to the No Child Left Behind Act

President Obama recently signed a rewrite of the No Child Left Behind Act (NCLB), now called the Every Student Succeeds Act. The rewritten act will leave federally mandated standardized testing measures intact but eliminate the harsh consequences for schools and districts that do not perform well.

The art of grafitti

We all want to feel in control of our own lives, and for some that means following the rules, while for others it means breaking them. Graffiti artists do that by adding a burst of color and their personal mark on the world around them.

County criticized for use of state aid

A fall-time feast with some seasonal classics

It's finally October, which means it's officially the season of Pumpkin Spice Lattes and oversized sweaters. That also means it's time for hearty soups, scrumptious baked goods, and pumpkin everything.

While being at Blair is an important and memorable time in the lives of those who attend, most people leave and don't return. There are a few Blazers, however, who went to school at Blair, graduated...and then found their way back!

Seeing the world through WWOOF

seeing a country as a tourist very often only scratches the surface of what's really there. It can be hard is to truly become immersed in the culture, but through World Wide Opportunities on Organic Farms (WWOOF), that's exactly what chemistry teacher Elizabeth Levien and Blair graduate ('07) Brendan Chareoncharuktun did.

Exams are right around the corner. As you mentally prepare yourself to spend long nights shuffling through piles of old notes and scramble to schedule last-minute study groups, it's important to keep a few things in mind.

Unplugging from our phones, reconnecting with ourselves

Digital technology can do just about anything. It is a pathway for procrastination and a blocker of boredom. But it's also a distraction from life itself.

The Blair community is mourning the loss of Milton Roth, who recently passed away unexpectedly. Roth, who taught calculus at Blair for over 40 years, brought time, effort and genuine love to work every day, and the suddenness of his loss has been felt by many.

Student intern Brittany Boyd received a Teacher of Promise award from the Maryland State Department of Education for her dedication towards teaching. Boyd received recognition out of several candidates from the University of Maryland.

While it may feel like a burden at times, mental illness is something that people can learn to deal with and even overcome to lead full, happy lives.

Come see "Fiddler on the Roof"!

PARCC testing may be over for now, but its effects were still apparent in the school as teachers rushed to make up missed class time and students felt the pressure to secure solid third-quarter grades.

"50 Shades of Grey," the movie based on E.L. James's wildly popular book, is taking the world by storm. While some people enjoy the movie and find the story entertaining and sexy, they are dismissing a glaring problem: "50 Shades” is a glorified example of abuse.

Sankofa full of talent and tradition

Sankofa—Blair's annual celebration of Black History Month that includes a stunning variety of song, dance, spoken word and more—brought history, culture and tradition to life Friday night, in its last year with Vickie Adamson as director.

What makes a concert into an unforgettable experience?

Math teachers Christina Martin and Kristin Werdann are co-sponsoring a Math Honor Society at Blair and aim to have the club up and running within the next few weeks. The Math Honor Society will help bring attention to students at Blair who have a particular interest in mathematics and encourage them to pursue that interest.

Ask anyone to choose a superpower, and more often than not the answer will be the ability to fly. While growing wings is sadly not an option, a few Blazers have found another way of soaring through the air

TheDream.US is a program designed to help create college opportunities for undocumented high schoolers and it is open for Blair students to apply. The program has a list of partner colleges, which allow students who receive the scholarship attend their school.

Boys' soccer eliminated from the playoffs in a penalty kick shootout

Boys' varsity soccer (6-3-4) played an exciting double-overtime game against Bethesda Chevy Chase (7-3-2) on Thursday, but lost on a shootout with a final score of 3-2.

Capturing fall before it's too late

We're nearly halfway through October, which means we are right in the midst of fall. Fall is an exciting season, with the piles of colorful leaves, the cool but not too cool weather and, of course, Halloween. Often fall seems to go by too fast, so to try to capture its spirit before it's too late, here are some fun activities for you and your friends.

Boys' soccer defeats Blake in an impressive display of teamwork

Boys' varsity soccer (5-2-4) beat Blake (6-5-2) by a score of 3-1 on Tuesday. A combination of communication, possession, and smart passes led the team to a satisfying victory over Blake.

Boys' varsity soccer (3-4-2) was unable to defeat Paint Branch (4-6) in a disappointing loss on Tuesday with a final score of 4-1. While Blair's energy picked up towards the end of the game, the team couldn't overcome Paint Branch's early lead.

Boys varsity soccer (3-1-4) easily defeated Northwood (1-5) under a grey cloudy sky on Monday evening. Northwood's defense was strong, but not strong enough to hold back a determined Blair team. Blair's offense had control of the ball for the majority of the game and managed to secure a significant lead during the first half of play.

Some are returning teachers, some are Blair alumni and some are stepping into Blazer territory for the first time. Here is a quick roundup of the new teachers at Blair.

Varsity boys' soccer (2-1-1) defeated Kennedy (0-3) in overtime by a score of 5-4. Blair managed to stay calm and work together despite injuries, a red card, and a determined Kennedy team in an exciting game on Wednesday evening.

Varsity boys' soccer (2-1-1) defeated Kennedy (0-3) in overtime by a score of 5-4. Blair managed to stay calm and work together despite injuries, a red card, and a determined Kennedy team in an exciting game on Wednesday evening.

Boys' soccer a mere penalty shot from a win against Whitman

Varsity boys' soccer (1-1-1) ended a chilly Monday night with a 1-1 tie against Whitman (3-0-1). Blair was not fazed by Whitman's strong reputation and refused to lower their energy throughout the game.

Mother and Daughter (MAD) Fitness is a small personal training business run by former Blazer Eve Kenney and her mother Sue Immerman set to open officially at 7302 Carroll Avenue in Takoma Park, MD, in the near future.

Going for the gap

In the college preparedness frenzy, many students overlook other post-high school options, like a gap year, that can help students do something they are passionate about and learn what is right for them.

With summer come those lazy days where you have no plans and end up sitting in your house with nothing to do. Instead of lying around, call up some friends and try some of these summer boredom busters.

The amount of college mail sent to high school students is unnecessary and overwhelming.

Many Blazers express themselves through grafitti

This quinoa salad is a nutritious and tasty dinner option for any chilly Autumn evening.

Our pumpkin bread contains sugar, spice, and everything nice.

Different pumpkin treats to warm up your fall days.