Film and Media Production teacher George Mayo attaches his amplifier and a small drum set to his trusty bike and sets off. He makes his way towards the nearest large empty space he can find. The location varies; sometimes it's a parking garage and other times he ends up underneath a bridge. He sets up his 40-watt amp and a looper before settling down to play his drums for around ten minutes at a time. He likes to film himself setting up and turn the footage into short videos about his expeditions. While he scopes out areas without foot traffic when practicing, Mayo is no stranger to playing in front of people. Together with several bands, Mayo has had the opportunity to tour around the US and Europe.

It's one thing to have a job to make money, but often it's all too easy to get stuck in a routine and forget to be creative. "I think it's important that when people get older that they don't give up their artistic interests. Even though I'm 49, I don't think it's silly that I'm trying to play in rock and roll bands," Mayo says. Mayo is one of several teachers at Blair who have found a way to balance teaching and music. 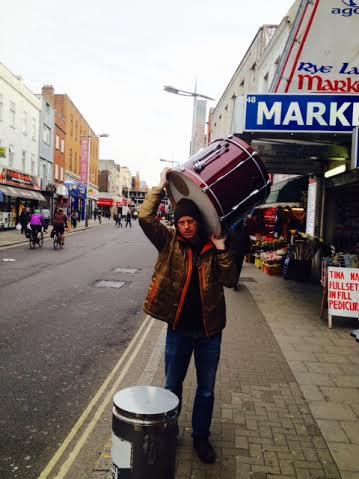 Photo: Mayo and his drums in London.

Photo: Mayo and his drums in London.

In addition to playing with a local band called The Skipps, Mayo sometimes tours with a band spearheaded by one of his childhood friends. He plays the drums as accompaniment to his friend's "experimental electronic music". Together with the band, Mayo has toured in the United States, played festivals like SXSW and Cropped Out, and even toured in Europe several times. "Touring in Europe is amazing because they guys I work with are really experienced. We get to stay in these weird venues and meet interesting people," Mayo says. In fact, Mayo says that his friend tries to play in Europe because it tends to be a better experience than playing in the United States. "You get treated way better in Europe than you do in the US," Mayo explains.

While he still gets nervous beforehand, Mayo says that the satisfaction of playing shows makes up for it. In addition to playing music, part of the excitement of touring also comes from the variety of venues that Mayo gets to experience. Each has its own distinct feel. Mayo compares a music venue to a new little world, because you never know exactly who or what to expect. "You have to deal with these personalities. Sometimes they cook you really good food and sometimes they get you pizza, sometimes they put you up in a nice apartment and sometimes you sleep in a bunk bed in the back, and you never know what you are going to get," he describes. 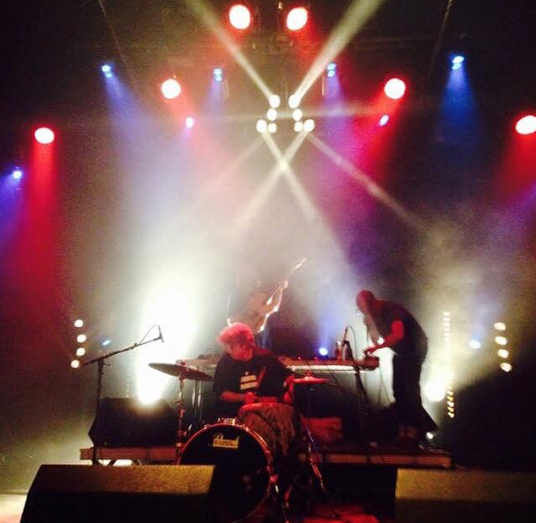 Photo: Mayo performs in Brussels in 2015.

Photo: Mayo performs in Brussels in 2015.

As for the balance between music and teaching, Mayo feels lucky to be surrounded by such an understanding staff and principal who support his creative interests. "When I say I want to go away and it's an interesting opportunity usually everyone is really supportive and they are like 'you should definitely do that'," he says. In fact, Mayo's band is currently trying to plan a two-week European tour in September.

While Mayo prefers to perform alongside other people, Guitar and Chorus teacher Isabel Hernandez-Catà is used to commanding the stage by herself. She uses her jazz vocals and piano skills in a variety of ways, from singing at weddings to performing at corporate events or in commercials.

Hernandez-Catà realized her singing talent in high school, but it wasn't until joining various acapella groups in college that she began to think of herself as a solo vocalist. While she went into college expecting to major in economics, at a certain point she realized that music was what she wanted to pursue. "It just got to the point where everything I did that wasn't music fell away. It just became who I was so I ended up majoring in music," she recalls.

Teaching guitar and choir allows Hernandez-Catà to be surrounded by music while at school, but she also appreciates the role music plays in her life outside of school. In addition, she tries to use her outside experiences to help her in the classroom. "It keeps me sane to do music outside of school, to remember that I am a musician in addition to a teacher," she says. "You can't let that part of your soul go away, and I think you're a good example to your students when you actively seek ways to be creative and learn more about music and write music." While she does write some music, Hernandez-Catà has not yet had the time to release anything. "Maybe it will be a summer project," she laughs.

For Hernandez-Catà, part of the joy of performing is being recognized and appreciated by those who attend her performances. "Anyone who makes art and says that they don't like to have their art appreciated by the consumers or audience of it is lying," she says. Music is a way for her to communicate, especially with her family. She likes to play with her dad and her brother at family gatherings.

While Hernandez-Catà gets to sing and play music in school, math department head Celita Davis keeps her musical pursuits completely separate from her teaching. She even makes sure to get all of her music business done before she walks into school each morning, and her fellow teachers have learned not to interrupt her when she's busy on the phone before school starts. "I try to keep school sacred and what it has done is allowed me to be fully present as a math teacher and then when I leave I can be fully present as this other person," Davis says.

Davis started playing the piano when she was five. Her mother was an organist, and she encouraged Davis to learn the organ as well. By the time she was 15, Davis had already started playing in churches. While she never took any music classes in school and instead focused more on math, music remained a crucial aspect of her life. By the time she got to college, Davis had to make an important decision between studying to become either a math teacher or a music teacher. She decided to become a math teacher, but continued to play outside of school. "I went to college and I did not take one music class, but I was still playing at all these churches and then I got popular and I was being contracted out," she remembers.

Davis has played at approximately 20 churches around the DC area and is the Minister of Music at a church that she has been with for 25 years. She's played with various choirs, at weddings, and at Bar Mitzvahs. At one point about 13 years ago, she stopped playing to focus on her teaching, but she realized that without music, she wasn't herself. It was then that she realized that she couldn't choose--she needed both math and music in her life.

One thing that Davis loves about being the Minister of Music is that she gets to choose the mood each time she plays. "Last Sunday I decided I wanted be traditional so I did a lot of traditional pieces and then sometime I have that lively thing going on. I enjoy being able to create the mood for what's needed for that particular Sunday or event," she says. In addition to creating the mood for everyone around her, playing music also allows Davis to express herself and relieve stress. "I play with passion, sometimes I play so passionately that I say 'ok I'm exhausted," Davis laughs. "There's something about performing and ministering that allows me to be me."

There are moments when Davis wonders whether she should have become a music teacher rather than a math teacher, but she's decided that if music was her main career, it could no longer be her outlet. She is happy to have both math and music in her life, and finding the balance between the two allows her to be an effective teacher and keep music sacred and special.

Whether it's by touring with a band, networking to find gigs and events, or directing music at a church, each of these teachers has found a way to hold on to their passion for music while maintaining a teaching career at Blair. Everyone has something that inspires and fuels them, whether it be painting, cooking, coding, or anything else, and too often people let go of those things in order to pursue a career. For these teachers, however, music is just too important to be let go of. "I think that you should always try to continue to follow your artistic interests and not give up even as you get older and a lot of people sort of tuck that away," Mayo reiterates. "A lot of people tell me 'oh I used to have drums and I got rid of them' or 'I used to have a guitar that I don't play anymore', and you can have a job and do all this stuff and still make noise."