Varsity boys' soccer (2-1-1) defeated Kennedy (0-3) in overtime by a score of 5-4.
Blair managed to stay calm and work together despite injuries, a red card, and a determined Kennedy team in an exciting game on Wednesday evening.

During the first few minutes of the game Blair dominated, quickly scoring two goals. Captain Ashe Durban headed the ball into the goal in the ninth minute of play, and less than two minutes later captain Rohan Oprisko followed with a goal of his own. Spirits soared as it appeared as though it would be an easy win for Blair.

This confidence was short lived, however, as Kennedy quickly countered with three goals of their own, two of which were scored off of penalty kicks. What had seemed like an obvious win for Blair was now anyone's game. As a result, pressure increased as Blair worked to outplay the unpredictable Kennedy team. In addition, with less than ten minutes remaining in the first half, Durban was issued a red card for remarks that he made in regards to a call by one of the referees surrounding the second awarded penalty kick.

With a valuable defender gone right as the second half began, Blair knew they had to step up their energy and play on with one less person on the field. "I thought the boys did an excellent job regaining momentum and calming themselves down during halftime," said coach John Haigh.

As the second half started with Blair one goal behind, the offense pushed forward looking to take the lead. In the 46th minute, captain Rohan Oprisko scored his second goal of the game, off of a free kick. The game didn't stay tied for long, as Kennedy managed to secure yet another goal off of another free kick.

Despite Kennedy taking the lead again, Blair refused to back down and sophomore Austin Kokkinakis scored a goal in the 56th minute of play. Once again, with time running out, the Blair team worked together to try and break the tie. The final minutes of the game were full of strong offensive plays by Blazers, but it was not quite enough and as the clock ran out its final seconds, the score stayed at 4-4. 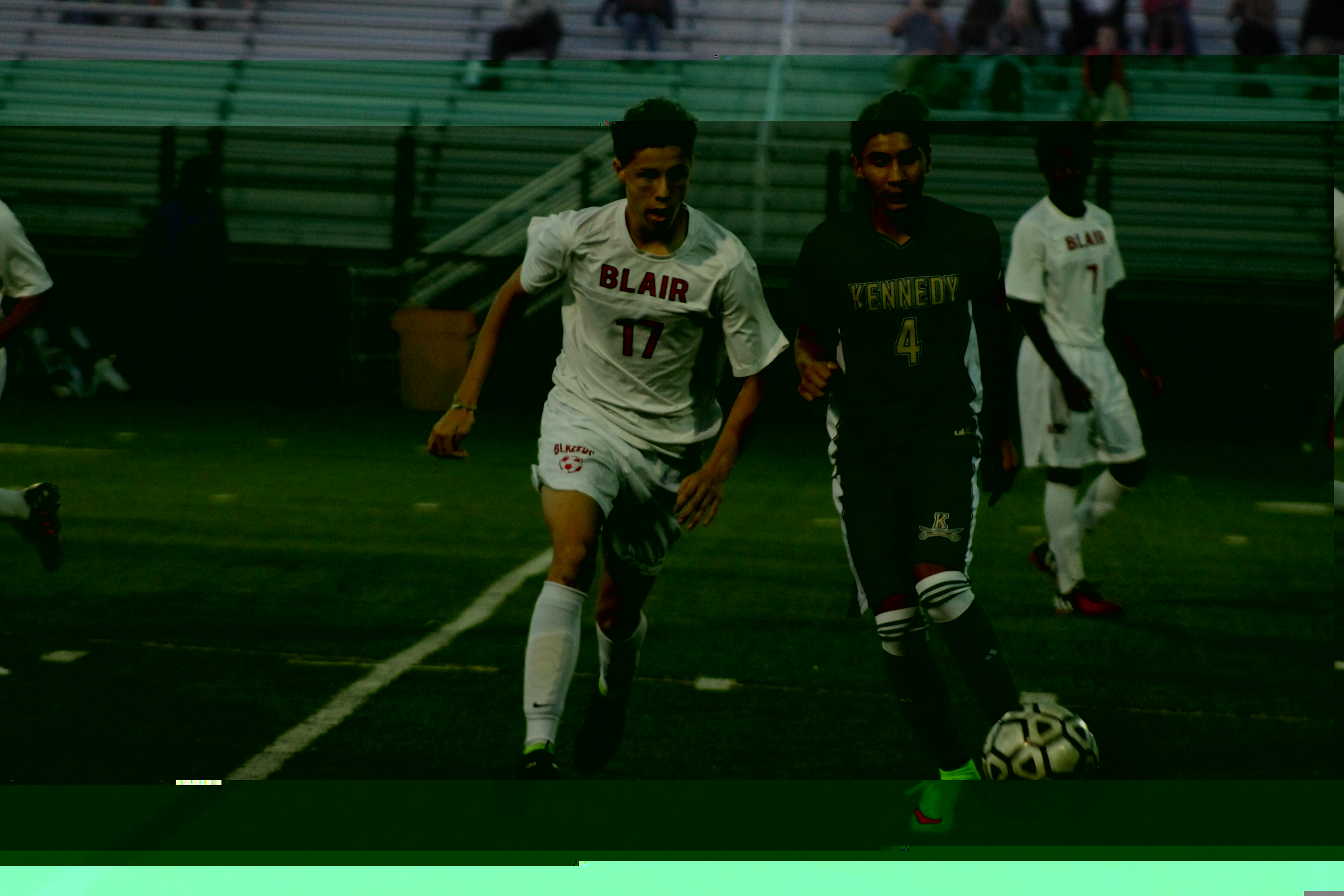 Photo: Adrian Baldwin tries to outrun a Kennedy player to get possession

Photo: Adrian Baldwin tries to outrun a Kennedy player to get possession

Overtime began and both teams fought for just one more goal. It was senior Pablo Murga who ended the game, scoring a goal in the sixth minute of overtime play. "Kennedy was quick with the ball but we got them on the counter attacks," Murga said.

Many Blazers were frustrated with the referee, feeling as though his calls were inconsistent. "He did not know what he was doing," said goalie Mathew Guerrera. "He directly affected all four of Kennedy's goals." Despite all of the controversial calls, Blair refused to give up and emerged victorious. "At the end we stayed calm even with the really bad reffing and we pulled together and put together everything we did in practice," Guerrera said.