The crowd is loud and chatty on the floor of the venue, eagerly awaiting what many have spent days, weeks, even months looking forward to. Peppy dance music plays from the huge speakers, forming the background noise to a jumble of conversations. Suddenly the lights dim and the music fades. The crowd momentarily hushes before erupting into cheers and screams. An unseen contraption sends waves of fog across the stage and the excitement seems tangible through the smoky air. The band emerges and the concert begins.

"Concerts are just magical experiences because it's all of your favorite songs, but you are seeing [the band] do it in front of you," says junior Lena West enthusiastically. She is just one of many Blazers who love not only to go to concerts and music festivals, but attend them frequently.

West, who attended her first concert in sixth grade, finds herself her happiest at concerts. She likes indie and alternative rock, or as she describes it, "songs you can be friends with." Earlier this year in October, she got to see her favorite band Walk the Moon in Baltimore from up close. "Being front row for your favorite band should be an experience that everyone gets to have," West says seriously. 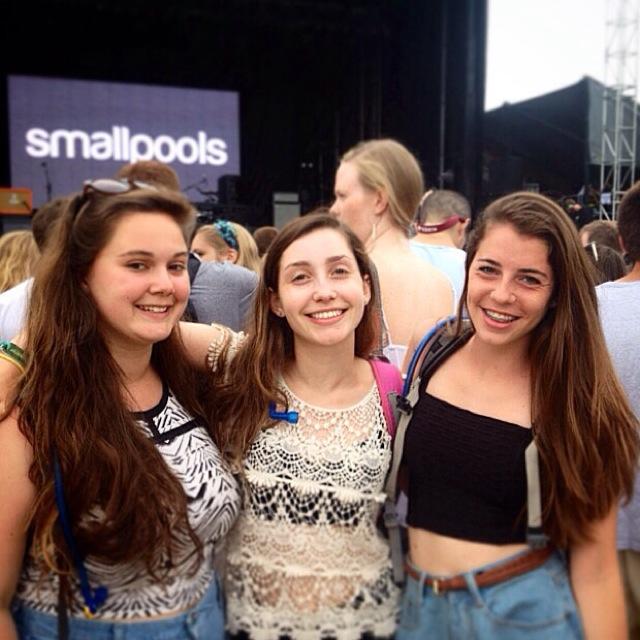 Photo: Junior Lena West (center) attended Firefly Music Festival over the summer where she got to see many of her favorite bands.

Photo: Junior Lena West (center) attended Firefly Music Festival over the summer where she got to see many of her favorite bands.

While West chooses not to, some take measures to ensure that the concert experience never fades from memory. Sophomore Michael Rivera, while enjoying concerts with his sister, likes to document the events. "I film every second of them," he states matter-of-factly. Rivera listens to mostly rap and R&B. Last month he saw Rihanna at the Concert for Valor. Like West, Rivera prefers to be right in the middle of the action. "When [the artists] are performing they look right at you because you are screaming and have your phone out and sometimes they throw hand signals up at you," Rivera explains.

Junior Clara Kapiamba, who describes her music taste as "pop punk and Beyonce,” is confident that she has been to at least 50 concerts. She even saw her favorite band Twenty One Pilots two nights in a row. After being to so many concerts, Kapiamba has her share of memorable moments. She recalls a concert where her friend got dehydrated and collapsed. "[She] started passing out and I thought she might be dead," Kapiamba remembers. At another concert, she had a rather unfortunate interaction with an intoxicated crowd member. "She bit my arm and puked on my shoes," Kapiamba says nonchalantly. Despite the occasional mishap, Kapiamba continues to go to every concert that she can, even if it means buying the tickets online without asking permission first.

Photo: Clara Kapiamba strikes a pose with the band "The Front Bottoms"

Photo: Clara Kapiamba strikes a pose with the band "The Front Bottoms"

Kapiamba plans on attending many more concerts in the future, and similarly, teacher James Mogge has loved music ever since he was young and still loves going to music festivals today. "If I had a hobby it would be music," Mogge says. "When I travel I'm always listening to music; when there are no students in the room I have a variety of music playing. It's a really important part of my life." Mogge developed his passion for music as a child. "I always used to look up to my friends' older brothers and sisters. I would walk into my friend's house and his brother would be playing a Jimi Hendrix album," he recalls happily.

On a few occasions, Mogge has built lasting friendships at concerts and music festivals. Rivera keeps in touch with a group of about six people whom he has met at live music events, and they often meet up at other concerts. West has also met lots of interesting people at concerts, but unlike Rivera, she says her friendships are ephemeral. Despite this, West still enjoys interacting with fellow fans. "Everyone is there because they love the band. You can meet all these people that like the same bands as you," she says.

While going to a concert or music festival always yields a different experience, some aspects are consistent. The music almost always forms a powerful connection between the crowd and the band or artist. Rivera puts it simply: "You feel alive." In addition to the feeling of being alive, there are various other types of energies at concerts as well. Mogge describes the three that he has noticed over the years: that is, the energy that the band or artist brings, the energy that the crowd gives off in response to the band or artist and the energy that each individual crowd member brings, which is often more personal and based on their connection to the band or music. Together, these energies form a unique atmosphere that make concerts so special. "It reminds me of an ocean. It's like a wave swells and you can see it moving back and forth in the crowd, and especially if it's music that people feel comfortable moving to, you get caught up in that wave," Mogge explains.

And when the band plays your favorite song? "You are just so into the song that nothing else matters and it's just the best thing in the entire world," West says, grinning.