Seeing the world through WWOOF

Many people desire to see the world. However, the cost of airfare and accommodations greatly reduces the chance of this dream coming true. What's more, seeing a country as a tourist very often only scratches the surface of what's really there. It can be hard is to truly become immersed in the culture, but through World Wide Opportunities on Organic Farms (WWOOF), that's exactly what chemistry teacher Elizabeth Levien and Blair graduate ('07) Brendan Chareoncharuktun did.

WWOOF, which began in 1971, links volunteers with organic farms around the globe. In most cases, WWOOF volunteers receive food and accommodation from a farmer in return for a solid four to six hours of work per day. The work varies depending on the farm, but can include weeding, harvesting, or cheese and wine making. People can volunteer anywhere from one week to six months. 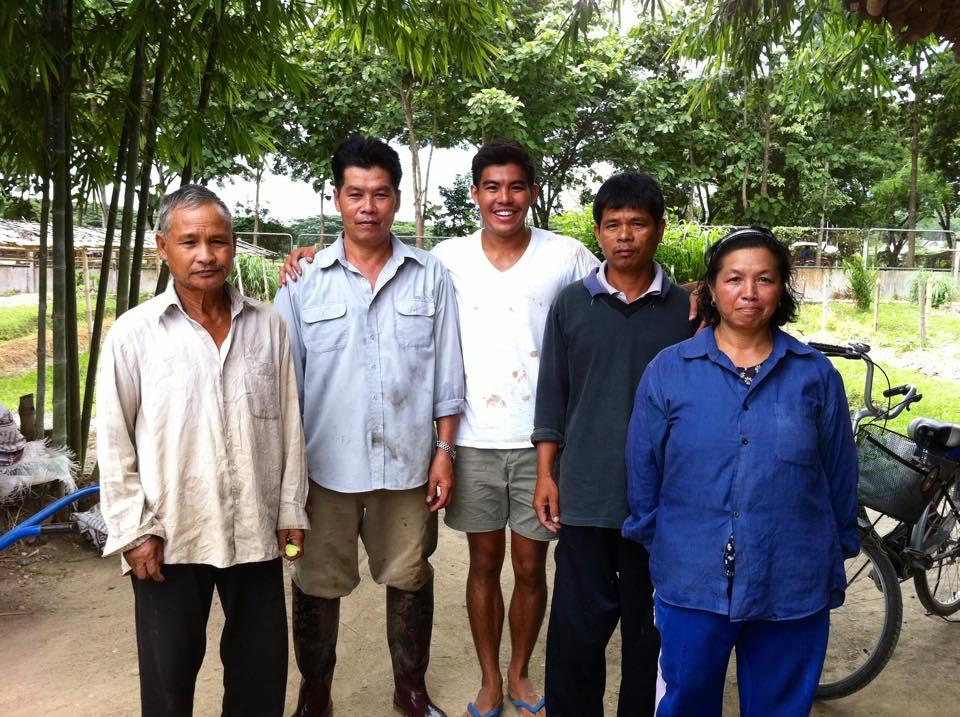 Through WWOOF, Levien worked for about four months on several different farms in southern Italy. She chose to go to Italy because she was familiar with the alphabet. "I picked a place that was exotic but not too exotic. I could read the letters on the street signs, even if I didn't know what things meant," she says.

On her first farm, Levien was a shepherdess and was responsible for taking a flock of 200 sheep out for walks. She also helped prepare cheese. "My job with the cheese was to go into these really gross high humidity warm rooms and there were these really huge wheels of cheese. I had to rub them down with sesame oil," Levien remembers. Sometimes, she would encounter cheese that had gotten stuck to the rack and built up a layer of mold. Through different kinds of manual work, Levien learned a lot about various farming skills. "Each farm was different but especially if there's animals, you never get a break. It's not just a job, it's a way of life out there," Levien says.

Chareoncharuktun has also spent time volunteering through WWOOF. After receiving a degree in environmental studies at University of Maryland, Chareoncharuktun knew that he wanted to take a year off. He heard about WWOOF while volunteering at the public health garden at UMD. Since he was already planning on moving to Thailand after graduation, he decided to spend some time working on a farm there.

Unlike Levien, who mainly stayed with individual families, Chareoncharuktun worked at an international school that had a farm on its campus. School groups from around the world would come to visit and learn about farming. Part of Chareoncharuktun's job was to help with cooking classes and give tours of the farm. "The class would come in and then we would send out little groups of students to different areas in the farm to pick ingredients and bring it back. Then we'd start the class and I'd just be in charge of making sure everybody's cooking. Then we'd have a big feast," Chareoncharuktun explains. When there wasn't a school group visiting, he would help with whatever else was needed, whether it was weeding or making a new plot by turning over the soil and adding a three-layer compost.

Levien decided to volunteer with WWOOF for a number of different reasons. Primarily, she wanted to go abroad without spending lots of money. In addition, she also wanted to learn to trust herself and be more independent, experience a different way of life and learn a new language. What she found the most rewarding, however, were the connections that she made with the people she met in Italy. Right after she worked as a shepherdess, Levien worked on a big estate that housed tourists and visitors. Levien helped around the house with whatever the owners needed. "That was my best experience. It was where I really connected with the old people. In my free time I would go for these long walks. They knew I was not from there and they just wanted to talk to me and it was just really beautiful," Levien remembers. She slept in a large granary, a storehouse for grain or animal feed, that she had to climb a ladder to get to.

One of the people Levien became friends with, Zia Nina, left a lasting impression. "She was a hard one to win over. I really got to know her and when I went to my next farm which was an olive grove, I would send letters to her in Italian and she would proofread them," Levien recalls fondly. "She would come visit me with some of the younger Italian girls that worked there and they would come and pick me up for the weekend and I just really connected with them."

Levien recognizes that had she simply traveled to Italy as a tourist, she never would have been able to make those special connections or experience Italy the way that she did while WWOOFing. Since she worked alongside her host families, Levien was directly exposed to the culture rather than the more filtered version of Italy that most tourists get.

Photo: Chareoncharuktun helped school groups from around the world make meals like this one using fresh ingredients from the farm.

Photo: Chareoncharuktun helped school groups from around the world make meals like this one using fresh ingredients from the farm.

Like Levien, Chareoncharuktun also loved getting to connect with people, and those daily interactions with the farmers stood out to him. When he first got to the farm, Chareoncharuktun would sit by himself at lunch. However, that quickly changed when the farmers invited him to come sit with them and share their food. "It was cool to see how even though they had very little, they were willing to share everything they had with me," Chareoncharuktun says.

There are a range of experiences someone can have when volunteering with WWOOF. Fortunately, Chareoncharuktun was happy with his situation. "It's very hit or miss. You can end up in a very rural area where you are living in a tent and not really getting any food, or you can end up like me. I got really lucky and ended up being at like a really rich school," Chareoncharuktun says happily. Since he was staying at a nice school, he had a dorm room and Internet.

After their time living abroad on farms, both Levien and Chareoncharuktun gained a new appreciation for fresh food. "When regular food costs a lot of money you have a better understanding of why it costs a lot of money. There's just a lot of things that are involved for that to be grown and there's a lot of labor involved," Chareoncharuktun explains. At one point, Levien stayed with a farmer whose wife had been brought up in a bigger city. After being exposed to such fresh and organic food, Levien was surprised when she accompanied the farmer's wife to the grocery store and a frozen pizza found its way into the cart. "It was just a very jarring experience," Levien chuckles.

No matter what farm or what country, volunteering with WWOOF has lasting impacts on those who do it. Chareoncharuktun realized that he simply can't have a boring office job. "I know for sure I can't work in an office. I have to be outside," he grins. Levien appreciates the experience for the people she met and the beautiful culture that she got to be a part of. In fact, she loved it so much that she hopes to spend some more time abroad with her husband and children. "My dream is to do this in South America. I would love to have [my kids] spend a year or two abroad," she says.

Looking back, both Levien and Chareoncharuktun are grateful for their experience with WWOOF and everything that it taught them. "It changed me for the better," Levien says.

Interested in working on a farm throughWWOOF? Here are some FAQs about t