The first Hunger Games film adaptation, which premiered in 2012, took the movie industry by storm and paved the way for a burst of formulaic dystopian movies ("Maze Runner," "Divergent," etc.). But the Hunger Games series itself is far from formulaic, and that's what made Suzanne Collins' books and their movie adaptions so popular. The basic premise, for the few that don't know already, is that two child tributes from each of the 12 districts in Panam are randomly selected and placed in an arena where they fight to the death until one tribute remains. Riding the momentum of "Harry Potter" and "Twilight," the last book in the Hunger Games trilogy is being split into two movie adaptations.

While it is not the most satisfying movie in the franchise, "Mockingjay" does its job: it prepares audiences for the undoubtedly thrilling final installment (which is set for a November 2015 release). Katniss seems to make her way through the movie in a constant state of agony and on the verge of tears, which can get repetitive, but she does have some standout moments. In order to rally the districts, Katniss shoots promotional videos and one of them takes place in front of a recently bombed hospital. As Lawrence shouts into the camera, it's hard not to get goose bumps, and her powerful words, "If we burn, you burn with us," seem to echo throughout the theater. Lawrence is in her element when Katniss' anger overpowers her sadness. Julianne Moore is convincing in her role as the strong-willed but wary leader of District 13, President Coin, and the combination of her pin-straight gray hair and powerful aura make her stand out in a jumble of forgettable performances.

While there is the occasional fight scene or battle, most of the movie is spent in the dark underground of District 13, and the plot moves slowly. The sluggish pace is in part remedied by the fact that since the last book is being split into two movies, there is more space to be true to the book. With the exception of a few minor differences, the movie follows the book pretty accurately. 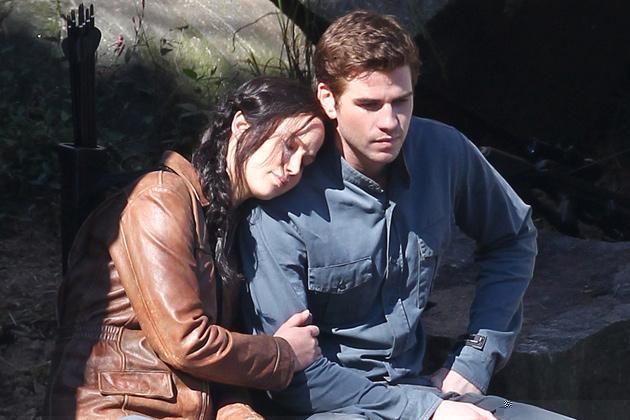 Photo: Katniss and Gale have a quiet moment while hunting in the forests around District 13.

Photo: Katniss and Gale have a quiet moment while hunting in the forests around District 13.

Unlike the glamorous settings of the other Hunger Games movies, the characters encounter mostly smoking ruins and destruction above ground. There is no fancy arena, no lavish Capitol, no bustling districts, leaving behind a dark and dense movie. Perhaps the only comic relief in the entire film comes from Elizabeth Banks as Effie Trinket, the posh and fashion-oriented Capitol escort.

The soundtrack has a few standout moments, the most obvious being "The Hanging Tree", a haunting song sung by Lawrence, which was arranged by the Lumineers and composer James Newton. In addition, Lorde's "Yellow Flicker Beat" is the perfect song to capture the dark mood of the film. Lorde curated the soundtrack, bringing together a variety of artists such as CHVRCHES and Ariana Grande for a refreshing diversity of sound.

"Mockingjay-Part 1" is not the most exciting movie, but for fans of the series who plan on seeing the last movie, it is worth a watch.