Many Blazers look back fondly on their four years in high school before they depart on whatever awaits them in their post-high school life. For many that means going to college to further pursue their education, for others it can mean getting a job, and for an increasing number of students it means taking a gap year in order to travel and find themselves. While being at Blair is an important and memorable time in the lives of those who attend, most people leave and don't return. There are a few Blazers, however, who went to school at Blair, graduated...and then found their way back!

Basketball, soccer, general PE, and weight training teacher Emanuel Charles did not foresee teaching in his future while he was a student at Blair. It was a conversation with a friend who taught PE in Virginia that convinced Charles to give it a shot, and he ended up liking it.

Back when he was a student at Blair, Charles played several sports including basketball, football and volleyball. When looking back on his time at Blair, Charles's time playing on the basketball team stands out to him. The support and team spirit that Blazers brought to the games, especially against Springbrook high school, elevated the whole experience for him. "Whenever we played Springbrook it was a spectacle, I mean so many people everywhere. It was competitive, the gym was sold out, it was really cool. I liked my basketball days," Charles recalls fondly.

Charles notes that while his students now are similar in many ways to his classmates when he was a student at Blair, the biggest difference is their relationship with technology. He remembers a time when kids wanted to spend more time outside being active, whereas now many would rather be entertained by whatever is on their phones or laptops. "Kids enjoyed being active a little bit more back then. They're always going to make mistakes, they're going to forget things, all those things are pretty much the same, but the technology, that really changed," Charles observes. 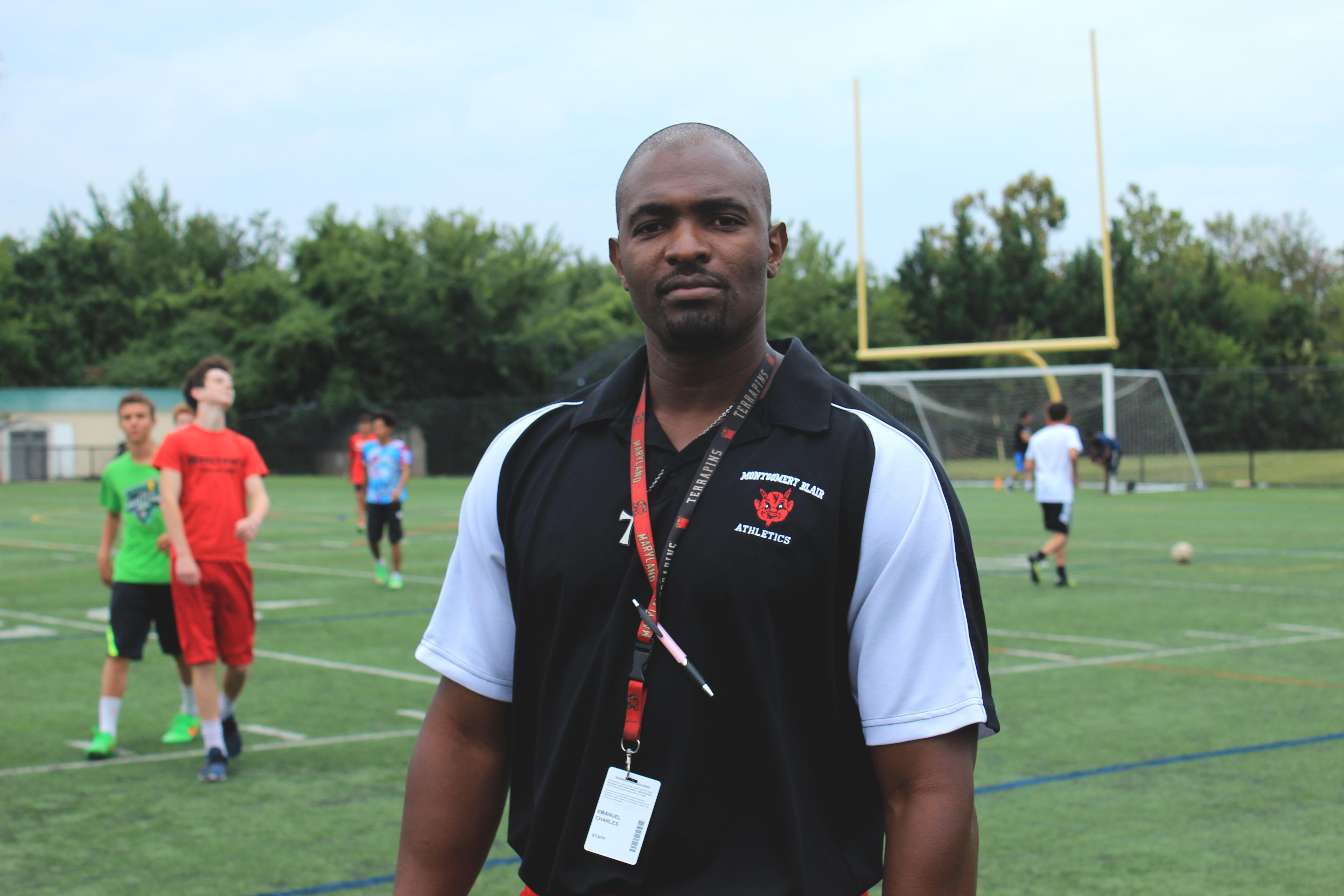 Reflecting on his high school mentality, Charles is determined to be a positive and supportive role model for his students. That means reaching out when he senses a student who is struggling or trying to connect to students that he feels may not be getting support in other areas of their life

Charles isn't the only alumni still walking through Blair's halls. When health education teacher John MacDonald attended Blair as a student, the school didn't include four grades, but three; 10th, 11th, and 12th. High school is where many people meet some of their closest friends, and for MacDonald, the core group that he was a part of at Blair stayed present in his life even after he graduated. "I have a very close group of friends who are still my best friends today," Macdonald says. "I think it is unusual because life has a way of taking you away from your friends. Although many of my friends may have gone out of state for college, we all settled back here, so I'm fortunate."

MacDonald also wasn't always planning on teaching. While in college, he began coaching junior varsity baseball at Blair, and after the encouragement of teachers and coaches who noticed his knack for working with kids, MacDonald decided to go back to school to get his physical education certification. Immediately afterwards he began teaching at Blair.

Something that MacDonald appreciated about Blair when he attended it as a student and appreciates even more as an alumnus is the diversity. While he emphasizes that it may be hard for students to understand this completely while they are still in school, MacDonald feels that Blair alumni have a significant advantage because of the social and cultural education that Blair gives them. "What students don't really realize until they get out of Blair is the the social education that they get. What I mean by that is you're exposed to so many different kinds of people at Blair that it's hard to grow up with the same biases and prejudices that other people have," MacDonald explains.

Like Charles, MacDonald was a part of Blair athletics and played baseball for three years. In addition, during his senior year MacDonald was sports editor for Silver Chips and under his leadership they were awarded the best sports page in Maryland.

While MacDonald isn't new to the Blair teaching game, other alumni are just starting out. Blair magnet alumnus and NSL and Comparative Government teacher Peter Cirincione is another former Blair student. Although he originally thought that he would become a computer programmer or web designer, that started to change during his senior year. "I was working in the computer lab a lot and staying for hours coding and I hated it and I thought to myself 'I don't care how much I'm getting paid, I don't want to do this all the time'," Cirincione remembers. Instead, he was more interested in social issues and being involved with things like the Social Action Club and Students for Global Responsibility. He even started his own mentoring program between Blair students and local elementary schoolers which in part led to his decision to teach.

Now in his second year teaching at Blair, Cirincione is beginning to see the kinds of advantages being an alumnus brings to teaching. For one thing, he can readily relate to his students, both in their high school education experience and outside experiences. "I know the culture, the neighborhoods, and the context that my students are coming from. When a kid says 'I was hanging out downtown', I know what they are talking about. I've taken these classes, I've taken some of these classes with some of these teachers!" Cirincione emphasizes. "I'm comfortable here."

Most students spend only four years at Blair, but proudly carry the Blazer identity with them wherever they end up. It's always special when a Blair student decides to come back to their alma mater and continue the legacy of dedication maintained by the entire staff.