Blair varsity boys' soccer (8-0) beat the Einstein Titans (6-2) 4-0 in a heated game that was close until the end. Throughout the game it looked as if the Blazers might lose their perfect record, but strong performances from senior forwards Sean Munroe and Jimmy McMillian led to late goals that eventually won Blair the game. The Blazers kept their sixth clean sheet with a solid defensive performance led by Jesse Griff-McMahon.

The Blazers again got off to a slow start and struggled to finish attacks early on. Despite dangerous runs by the forwards, the Titans defense covered the forwards who had little support from the midfielders. Blair's defense stayed strong and foiled attempts by Einstein's attack to get the ball into the back of the net, but still had trouble clearing the ball out of their own half.

By the end of the half, the game was scoreless with no shots on goal by either team. The half started off the same way as it ended, with both teams trading possession and no one controlling the game. The turning point came in the 54th minute, when junior defender Austin Kokkinakis received a yellow card for a tackle on an Einstein midfielder. A counterattack after Einstein's ensuing free kick led to a breakaway for Munroe, who took a touch to beat the goalkeeper before firing in a shot to make the score 1-0 in the 58th minute. His goal broke down the floodgates for Blair and sparked the offense.

The Blazers pressured the Titans after the restart and the ball found its way to midfielder Diego Guarniz Layza who found Munroe for his second goal of the game in the 59th minute. Precise passing from the Blazers found McMillian just outside of the box in the 66th minute for his first score of the game to make it 3-0. Junior D.J. Mamo then came on as a substitute to score in the 75th minute after a free kick from Guarniz Layza ricocheted off the crossbar. 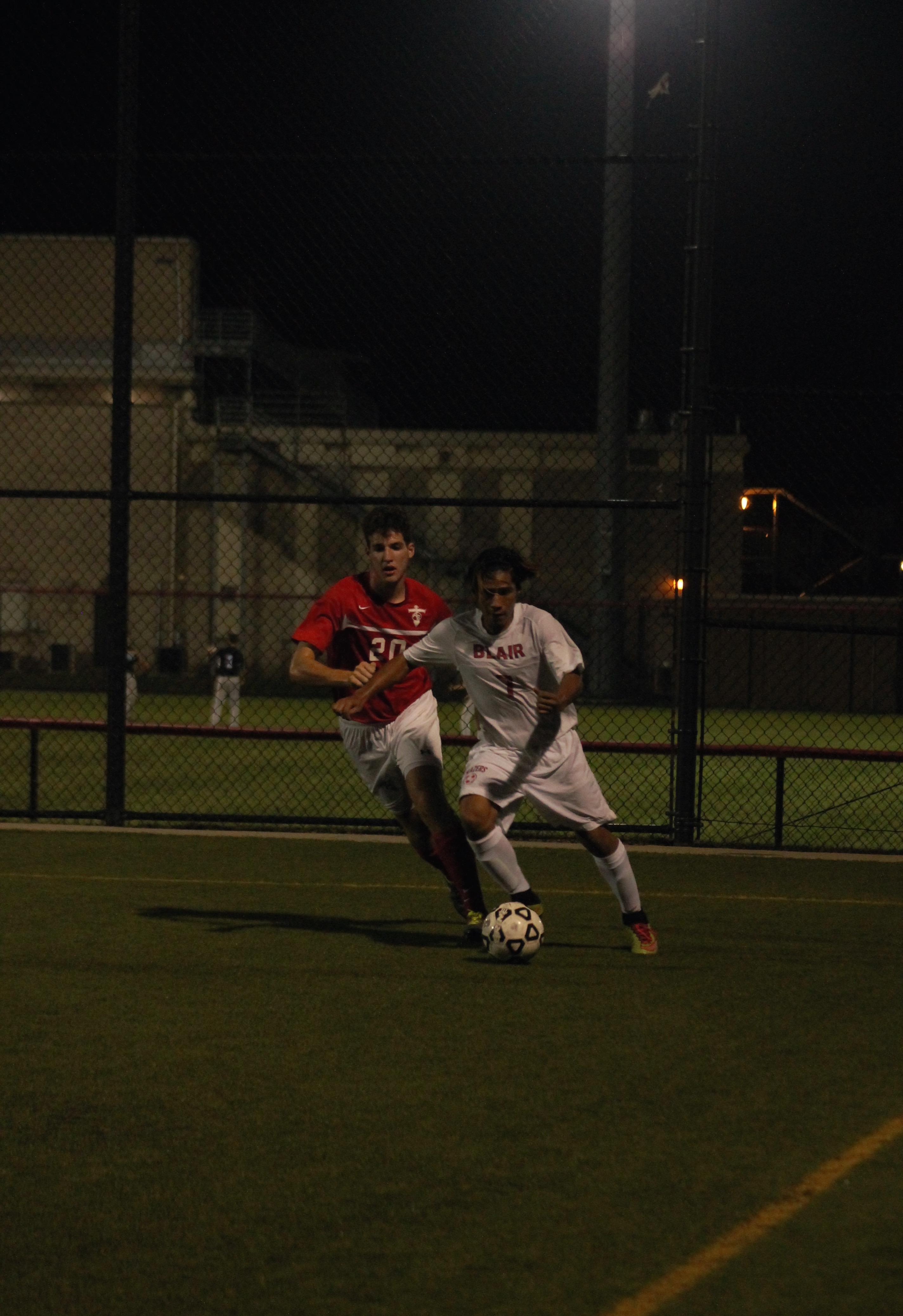 Photo: Diego Guarniz Layza finished with a two assists on the night.

Photo: Diego Guarniz Layza finished with a two assists on the night.

The Blazers got off to a rocky start, largely due to overconfidence. "We came into this game undefeated, and we definitely underestimated them," Munroe said. Griff-McMahon agreed that the Blazers came into the game expecting an easy win. "We slacked off so we struggled a bit in the beginning," he said, "the team was getting frustrated and our passes weren't connecting."

The second half, however, was a different story. "In the second half, we really turned it around," McMahon said. "We kept our composure and stayed calm." Coach John Haigh believes that the strong performance in the second half was due to teamwork. "It was team concept, they played much better as a team in the second half," he said. Haigh knows the team cannot slack off and expect to stay undefeated. "We have matchups against three really good teams coming up and we can't just take a half off like we did today," he said.

The Blazers have three tough games come up against Whitman, Walter Johnson, and Richard Montgomery and need to be at their best.