The Blair boys' varsity soccer team had not won its regular season opener since 2008, but that all changed last night, when the Blazers (1-0) defeated the Bethesda-Chevy Chase Barons (0-1) by a score of 3-2.

Blair coach John Haigh called it a "gutty performance." Blair was forced to play without defender and captain Alex Epstein for most of the game after he injured his hamstring. Later on in the match, goalkeeper Luis Cruz also had to exit the field due to injury.

The blazers came out firing from the first whistle, keeping the majority of the early possession in B-CC's half of the field. It did not take long for the first chance of the game. Alferid Kemal slipped a through ball to Ibrahima Kuoyeto, who put his shot just wide of the post.

Kuoyeto redeemed himself just a few minutes later, when Wako Wako played a long ball into the box. The onrushing Kuoyeto flicked the ball over B-CC's goalie and into the net for Blair's first goal of the season.

Later in the half, Blair tacked on another goal when Armel Nguimfack sent a free kick from just inside midfield into the box, attempting to connect with one of his many teammates crashing the goal. Instead, amidst the chaos in front of the net, the B-CC keeper found himself in poor position. A huge bounce and Blair was up 2-0. 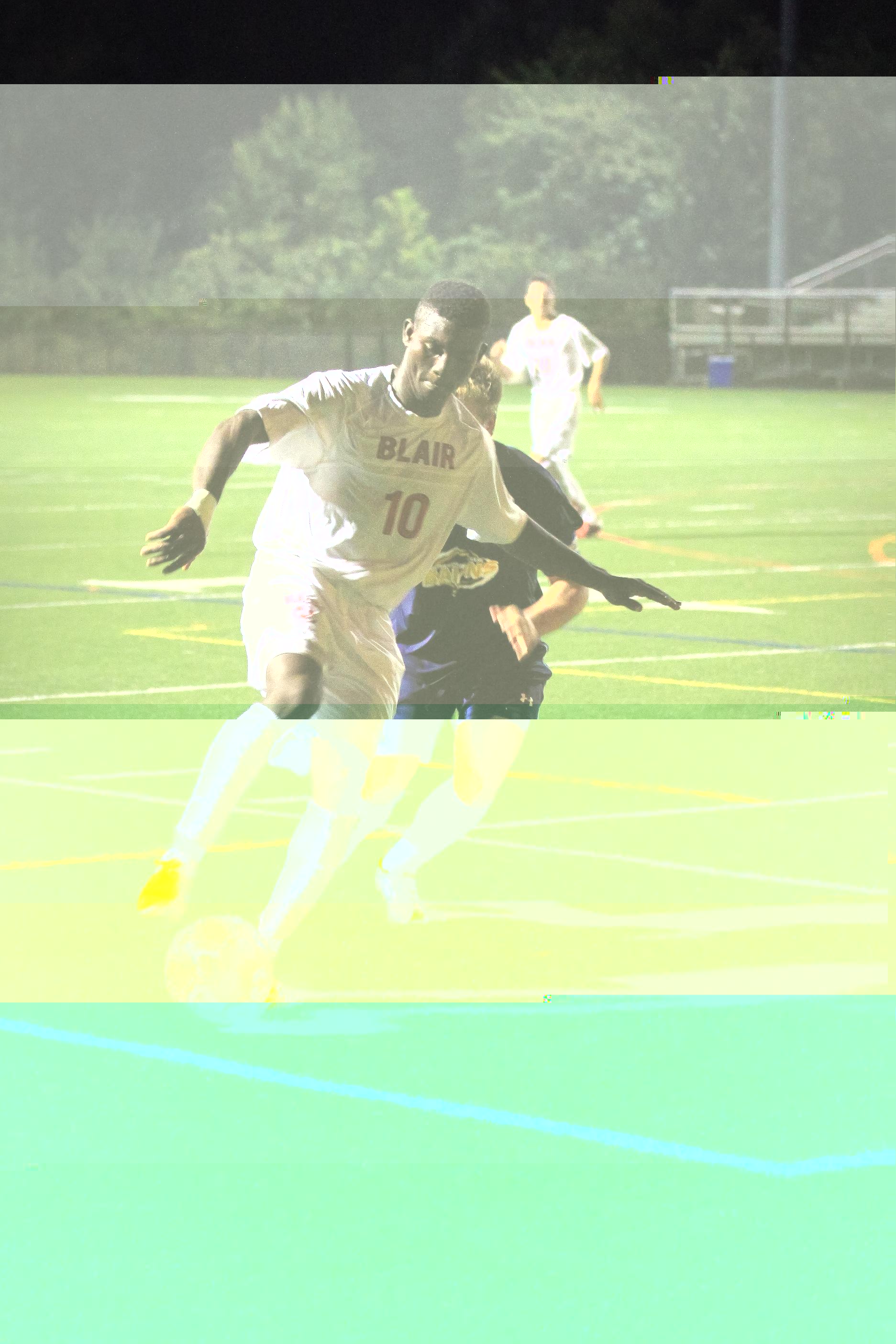 Photo: Blair's Keenthy Yeboah, who scored a goal in the game, controls the ball.

Photo: Blair's Keenthy Yeboah, who scored a goal in the game, controls the ball. Photo courtesy of Emma Howells.

Following the goal, B-CC began to create chances of its own. The Barons nearly volleyed home a cross from a free kick and also could have capitalized on several Blair turnovers at the back. "[The players] really need to improve on how to play with a lead," head coach Haigh said.

Despite the shakiness, Blair managed to go up 3-0 when Wako played a free kick into the box and Keenthy Yeboah headed it home. The celebrations were only short lasting, however, because B-CC promptly responded with a long ball into the path of a striker who chipped a shot over Cruz and into the goal, concluding the first half.

The second half did not feature many chances, unlike the action-packed first half. Early on, Cruz acrobatically tipped away a threatening B-CC cross but was forced off the field limping. On a B-CC corner kick shortly thereafter, the ball ricocheted around the box before a Blazer inadvertently tapped it into the net for an own goal, bringing the score to 3-2.

The game got a bit testy later in the half when a Blair foul led to retaliatory shoves by B-CC and both teams yelling at the referee. The ref issued two yellow cards, one to a player on each team, and nothing more was made of it. Ruben Martinez, who was involved in the spat, understood the importance of keeping a cool head. "We just have to keep calm and not talk back to the ref. If we talk back, then they could give us a card or start making calls in the other team's favor," Martinez said.

B-CC's final chance came on a low drive. But Cruz, who was back in goal, dove to his left to make the save. Martinez acknowledged the defensive lapses but is nonetheless proud of the team's performance to start the season. "We played pretty solid. Defensively we had some mistakes, but we played as a team and that's why we got the win," he said.

Coach Haigh admitted that he is concerned about the injuries. Epstein will likely miss a couple weeks and Cruz might also see some time out.

Nevertheless, there is reason for optimism, as Blair has a week to recuperate. "We have a good bit of time off, which is nice. The time off will really help us heal," Coach Haigh said.

The Boys' varsity soccer team's next home game is against Richard Montgomery High School on Friday, September 20 at 7:00 PM.