The area's country buffs found it "a good night/to be out there soakin' up the moonlight," on Saturday when Brad Paisley and his entourage hit the Nissan Pavilion stage for a sold-out show of more than 20,000 fans. On the road for his latest album "5th Gear," Paisley serenaded fans with a mix of his latest chart-toppers and celebrated classics. 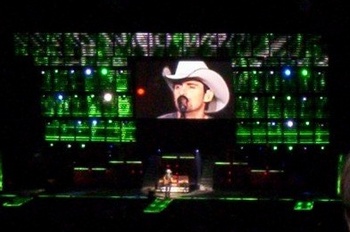 Popular with listeners for his playful lyrics and stellar guitar skills, Paisley hit the stage following a countdown composed of fan-submitted video clips (one of which included young country star Carrie Underwood). After the countdown, Brad appeared from behind some spectacular lit-up screens that mimicked flashing binary computer programming as a background for his latest number one "Online." The crowd-pleaser warmed everyone up to belt out familiar lyrics for the next hour and a half. As the song came to an end, Paisley wowed the crowd with the kind of mind-blowing electric guitar solo which most artists leave to their lead guitarists.

Once he played a few hits from previous albums, including "Mud on the Tires" and "Wrapped Around," Paisley took a break and let his band take over while "Zoom," a short film animated by Paisley himself, played on the jumbo-tron.
Minutes later, Paisley returned to give his band a breather. Without the pomp and circumstance of the band to distract the audience, he proved his natural flair for live performances. Paisley accompanied his timeless singles "When I Get Where I'm Going" (originally a duet with Dolly Parton), "Little Moments" and "We Danced" with acoustic guitar.

"When I Get Where I'm Going" featured a montage of late legendary performers, historic figures and tragic events. Included in the video were Johnny Cash, John F. Kennedy, John Ritter and the Twin Towers, creating a reflective mood. Paisley extended the somber set with "Whiskey Lullaby," a duet with Allison Krauss. Krauss appeared on stage alongside Paisley via a life-sized screen, deceiving fans about her presence for a few moments.

With the reappearance of his band, Paisley brought back the lighthearted atmosphere by finishing with the new hit "Ticks" and the old sing-along favorite about the substance prevalent in the audience: "Alcohol." Fans throughout the venue belted out the lyrics to the obvious crowd-favorite, celebrating the beverage that for years has "Been makin' a fool out of folks/just like you/and helpin' white people dance"" and given the audience "some of the best times you'll never remember."

Paisley's openers were teen sensation Taylor Swift and the Academy of Country Music's Best New Male Vocalist of 2007, Rodney Atkins. Popular among the teenaged female audience, Swift played a number of hits from her self-titled debut album full of feminine angst, such as "Picture to Burn" and "Should've said No." But, her questionable choice of beginning with Eminem's "Lose Yourself" stunned and embarrassed the crowd as she experienced some serious genre confusion.

Atkins followed with his family-oriented tunes like "Watching You" and "Going through Hell (Before the Devil Knows It)." He interspersed his performance with live video feeds of soldiers watching the concert abroad, which struck a chord with the patriotic audience.

The lighthearted and playful vibe of Paisley's music helped bring the excitement level way up for the rest of the concert, and though much of the crowd was thoroughly inebriated, the show should remain one of "the best times" that fans will remember.