Bumpy Ride in Ride Along 2

There are two good reasons to go see Ride Along 2: Kevin Hart and Ice Cube. The actors team up for the second time as brothers-in-law James Payton (Ice Cube) and Ben Barber (Kevin Hart). Being a Kevin Hart movie, it has a very silly feel and a somewhat childish sense of humor.The movie, though not great, is nonetheless a fun watch.

The movie begins with James, an experienced detective, on a bust and trying to capture a major Atlanta drug dealer. Ben, who thinks of himself as Nick's partner, has recently become a police officer and interrupts the bust leading to the wild escape of the dealer. During the disastrous bust the pair finds an encoded flash drive that leads them to A.J (Ken Jeong), a hacker in Miami.

If you go into the movie expecting an intricate, original plot, prepare to be disappointed. The plot, which is fairly unoriginal (corruption, drugs, things blowing up) is also very similar to the plot of the first movie, but this time set in Miami with two more characters. Although not very imaginative, there is some good action in this movie, including a Grand Theft Auto type car chase, some foot chases, and a lot of explosions. While these aspects of the movie could be serious, just Kevin Hart being Kevin Hart makes even the action parts hilarious. The movie also tends to be predictable, which is not surprising for a cop comedy. 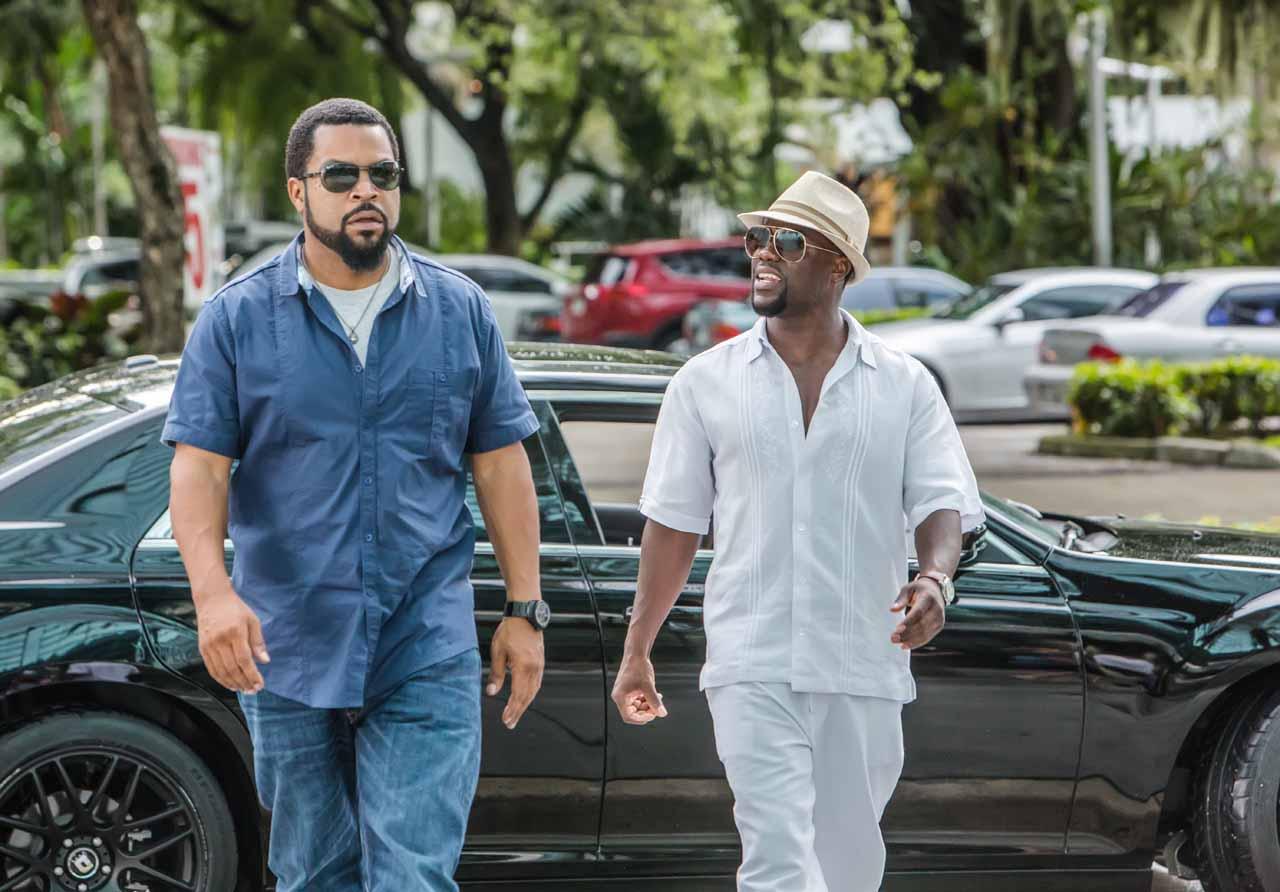 Photo:
The overall plot and writing is unimpressive but what does work for the movie is the actors. Ride Along 2 features a very funny cast including Kevin Hart, Ice Cube, Ken Jeong, and Sherri Shepard. The movie mainly focuses on the relationship between James and Ben. The combination of Ice Cube's serious, stereotypically masculine and moody persona, and Kevin Hart's talkative, accident prone, people-person character creates a weird balance and a funny dynamic. This dynamic mostly consists of Ben saying something stupid and James giving him a classic scowl and sarcastic retort. The addition of A.J, a party animal, ladies man, and computer genius, just adds another character in the wild mix.

One of the best scenes between the three is when A.J takes James and Ben to a Miami club for Ben's bachelor party and official police business. Ben and A.J go absolutely crazy, drinking, dancing on tables and having a great time while James, ever serious, sips water and attempts to stay undistracted in order to catch their suspect. Hart and Jeong are very funny pairing and seem very natural as they act wild together. The acting in the scenes seems very organic and the way the two work together is very entertaining.

Maya, played by Olivia Munn, is a homicide detective with a serious and aggressive demeanor, is the female counterpart to James. The two work scarily well together while trying to combat the annoyingness and inexperience of Ben and A.J. Munn does a great job of being serious and intimidating as well as being funny. Though those are the main characters of the movie some of the funniest parts come as Ben deals with his wedding, and namely his wedding planner, Cori (Sherri Shepard), who Ben feels is ignoring his wishes for the wedding (Which is his too!).

Cinematically Tim Story's direction is nothing special, featuring straightforward and simplistic shot selection. The use (and quantity) of special effects, mostly pyrotechnics, is pretty entertaining just because there is a lot of things blowing up.

Overall the movie isn't that great and, while there are some funny jokes, what really makes the movie funny is Kevin Hart and Ice Cube. While entertaining, this isn't the type of movie that is worth your twelve dollars at the movie theater. It would be much better watched curled up in the comfort of your home, watching on demand for five dollars. If you're looking for a well developed plot and a complex movie, Ride Along 2 is not for you. But, if you're just looking for something that is light and slightly ridiculous, something that is going to make you laugh out loud (and probably cringe) then Ride Along 2 starring Kevin Hart and Ice Cube is a decent pick.