Why public transportation is beneficial all around

In an era of Uber, Lyft and many personal vehicles, cars contribute a lot to climate change. All of the carbon dioxide that cars emit damages the environment every time they are used. While some buses also emit the same amount of carbon dioxide, public transportation is a much greener option because many people are going to the same place, using the same vehicle, which decreases the carbon emissions would emit if they had gone separately.

Cars, trucks, and motorcycles emit carbon dioxide, adding to the greenhouse effect. The greenhouse effect is the trapping of the sun's warmth in Earth's lower atmosphere. This is due to the greater transparency of the atmosphere to visible radiation from the sun than to infrared radiation emitted from the planet's surface. All of the carbon dioxide has moved to the atmosphere, where the excess gas traps more of the sun's heat. This gradually heats the Earth's atmosphere and surface, in a process also known as global warming.

Although taxi services are popular modes of transportation, these car services encourage the use of cars over more eco-friendly modes of transport such as the metro or buses. The idea that users are able to reserve vehicles by sending text messages or going through the app popularized these services. The customer can also track the vehicle as it makes its way to their location. 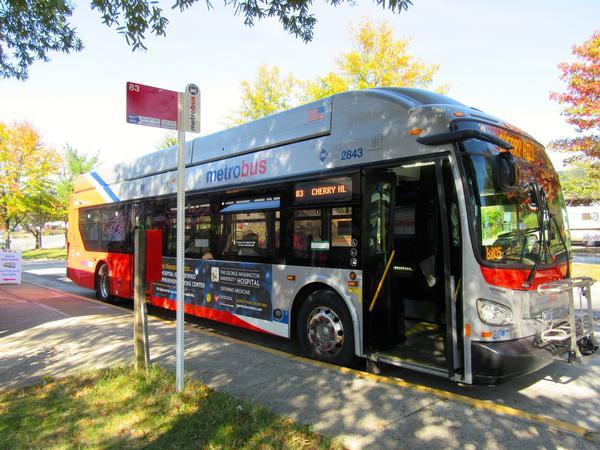 Photo: Metrobus is capable of transporting many people to common stops.

Photo: Metrobus is capable of transporting many people to common stops.

While these taxi services do have their places on a scale of usefulness, public transportation is not only better for the environment, but also for wallets. MetroBuses, for example, will on average only cost an adult $1.75 as a flat fee, while an Uber will charge about $0.15 per minute. Charging per minute means that the cost of an Uber sitting in place during rush hour amounts to more than the public bus fare.

Despite the cost difference, Uber's and Lyft's are an easy way to get from place to place whenever one doesn't want to drive or take public transportation, but this service encourages the use of cars over more eco-friendly modes of transport such as the metro or buses, the latter which frequently advertises how green they have gone.

Public transportation can admittedly at times be more inconvenient than Uber and Lyft. Buses fill up quickly, or get stuck in traffic with personal vehicles and taxis. However, if more people were to take public transportation, thus emptying the roads of personal vehicles, and buses were able to come more frequently, traffic and an overload of riders would no longer be a problem.

Blair, which has around 3,000 students, offers school bus services for all students. In addition, Blair has a large parking lot open to student drivers and teachers. The parking lot also has a system for student drop-offs. Students, come the start of the new school year, ought to think about their mode of transportation to and from schools. The bus service is eco-friendly and practical, whereas driving individual cars to and from school every single day releases more carbon dioxide into the atmosphere that could be avoided if the students instead took the bus.

Blair students, and other residents of the DC metro area, should reconsider their transportation lifestyles and minimize their carbon footprint. The more eco-friendly option would be for them to either walk, bike, and take the bus or the metro whenever possible. Increasing the use of public transportation would be extremely beneficial for the environment and the wallets of people in the community.